Nation building lesbians at the "SPace" 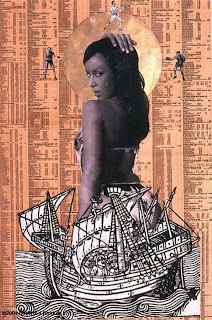 Since I first learnt of our Arts and Culture Minister’s narrow perception of art I have been waiting for a close encounter with her; so when I saw that she was expected to open the SPace (yes, the “P” is meant to be upper case thus alluding to the word “pace” too) I eagerly slipped into my glad-rags and practiced making long “BOOs” in the car on the way to the Africa Museum in Newtown, where this new Pan-African exhibition is being staged. But, of course, she was a no-show. It seems we did underestimate her intelligence: while she might not grasp the finer nuances of high art, or even low art (pornography) for that matter, she does seem to realise that she is persona non grata in the art community. Hence she skipped this affair. I was hugely disappointed; half of the reason I attended the “VIP” opening was so that I could emit a long, loud “boo” the moment she took to the stage. Not the most elegant of rebuttals I agree but one that would have been quite satisfying on a primal level. Frederico Freschi (from Wits’ Art History dept) and his friend Neil (a visual consultant) had cooked up a sharp intervention to mark the art community’s protest: a pink triangle badge (circa Nazi era Germany) which boasted the phrase “Nation building Lesbian.” Within hours of the event half of the crowd there were walking about with this pink triangle attached to their breasts. But, of course, there was no Xingwana to witness this wry act. In her place was some councillor who suggested in his speech that artists were “abnormal” people because they kept odd hours, what with penning poetry at 3am in the morning. Speeches by non-art-folk at art events are always a bit clumsy and dull but the guests opening this event really did seem to take the cake with their dated notions of artists that conjured visions of 17th century English poets thus proving that the divide between the art world and government (and corporates) is a deep one.

I will be reviewing the SPace exhibition in depth in the weeks to follow so I won’t get stuck into it now. I will say this: Africa Museum is the worst venue for any kind of display so the curators – Thembinkosi Goniwe and Melissa Mboweni – had a really tough challenge with this one. From Goniwe’s speech it seems that with this exhibition he and Melissa aimed to follow in the footsteps of Simon Njami’s Africa Remix with not only a strong Pan-African thrust but also in their determination to reposition attitudes about the continent via some gargantuan visual display that showed Africa to be more than a perilous “dark” continent. Hence the sub-themes of the exhibition; pleasure, beauty and intimacy – would reflect “the other side” of the continent. Of course, in selecting this (flawed) scheme, this exhibition is bound to generate some of the same criticisms that Njami’s did – perhaps even more so because the underlying themes are overly simplistic and highly problematic (“beauty” and “pleasure” are such loaded terms in relation to the continent) and do not translate as well as they should have in the curating. There were moments when I was gripped by a frisson of excitement as my eyes darted between a new Mary Sibande work (showing her alter ego Sophie tied to a psychoanalyst’s couch) and  Avant Car Guard’s black 20th “anniversary  cake” and the heaps of new Gabrielle Goliaths that prove her to be the new rising star on the Jozi art scene – but ultimately I left feeling a bit deflated.

(P.S. There were lots – too many in my opinion – of Godfried Donkor’s works similar to the one pictured above)
Posted by Mary Corrigall at 1:04 AM No comments: