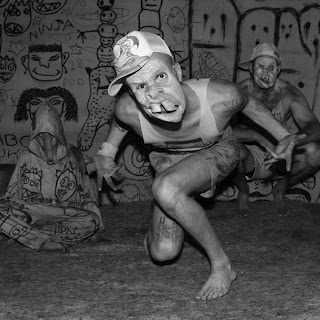 NINJA and Yolandi look just like their web incarnations when they take to the stage at the Alexander Theatre in Joburg. Ninja is sporting his signature brush-cut last seen on churlish Afrikaners in the eighties. A pair of boxer shorts bearing the artwork from Pink Floyd’s 1973 album, Dark Side of The Moon, hangs loosely on his emaciated frame. His bony, bare chest is colonised by tattoos some of which display the names of notorious Cape Flats gangs. In other words, he is every bit an eighties-throwback with a Cape coloured flavour. He is like an impoverished protagonist, whose hybrid look is both a result of creative invention as it is born of necessity.

Yolandi may be petite, childlike, even a touch delicate looking with her wispy ashen-blonde hair, but her svelte frame covered in a gold body suit is subject to angry, sharp movements. She darts around the stage like a pugilist warming up for a fight. She’s the antithesis of the retiring pretty “Afrikaanse meisie”. Their lyrics are a conflation of languages and accents, echoing their mongrel status. They are also crass and full of expletives - they would even make a Bergie blush. DJ Hitek, said to be the music powerhouse behind the band, recedes into the background. This is not the “real” DJ HiTek, just someone standing in for him, his public stand-in – apparently the real figure doesn’t want public exposure. Maybe he is a pimpled teen churning out hardcore beats from his bedroom. Maybe he is already in the public eye – aligned to another band or brand of music.
“DJ Hitek is a concept,” posits Roelof Van Wyk, an artist who is friendly with Die Antwoord.
Monochromatic child-like drawings flicker on screens positioned around the stage. They are haunting stylised representations of human faces inspired by the naïve doodles that appear in Roger Ballen’s photographs of impoverished Afrikaners living on the fringes our society. The visual association isn’t superficial; Ninja and Yolandi look like the kind of couple that well-heeled suburbanites would only encounter if their car broke down while traversing through a no-go neighbourhood on the periphery of Cape Town, in suburbs where the boundaries between impoverished whites and coloureds are loosely defined.