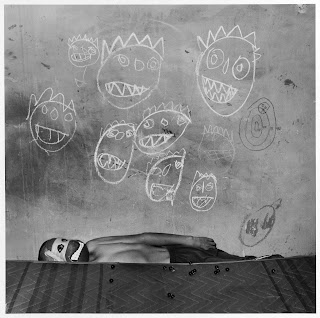 In Sideview of Hotel, Middleburg (1983), Ballen presents a vacated rundown building. An old Ford car from a bygone era is parked out front. Because it is in mint condition (a rarity for a Ballen photograph) Ballen disrupts the temporality of the image – if it was not for the date in the title, the viewer would have no idea of the year/the decade the photo was taken. This is a key feature of his work and one which challenges one of photography’s supposed unalterable characteristics: fixing events in a specific time and place. Ballen, however, has conceived of a way of circumventing this in both his documentary and abstract work. Consequently the former body inevitably becomes abstract, fictional – other than reality.

Impoverished, white Afrikaners were his predominant subject-matter when the American-born Ballen first began to photograph in South Africa. In Dresie and Casie, Twins, Western Transvaal (1993) he presents two mentally and physically challenged adult male twins. Their ears are extraordinarily large and their heads unusually oblong. One could presume that this defunct society which is indirectly and directly referenced throughout his work is a white-dominated one that enjoyed its apogee during apartheid. The deformed, inbred Afrikaners mark the nadir of this reign of power. These physically repugnant and misshapen beings give expression to the consequences of a closed, insular society.

This capsule-retrospective, however, clearly shows that Ballen’s interest in these distorted human forms and the decrepit interiors they inhabit predated his South African photography. Blow Up Boy, East Malaysia (1976) features an impoverished child sucking air into his chest and thus distorting his upper frame. A dirty wall forms the background. Thus it is clear that Ballen’s fixation for soiled interiors and distorted forms reaches beyond political commentary. These kinds of people, these kinds of places are a conduit for something else. Loss and nostalgia.

It is not a loss of power (political or ideological) or longing for a better age that his distinctive aesthetic maps. His work acknowledges that the memory of a former existence has been lost. So to some extent, his photographs express a longing to retrieve an intangible state of being that no longer has a form  – the animals and cute toys are part of a desperate ploy to retrieve lost innocence that was corrupted at its genesis.

It is not just Ballen’s subjects that are held captive by this reality but Ballen himself, who is compelled to revisit and re-enact these scenarios over and over. The impoverished looking subjects and objects in each of these macabre chambers are ciphers for his own longings, betrayals and recriminations. The bedraggled, threadbare teddy bears, the naive childlike doodles on the walls that recall spectral figures that reappear in photograph after photograph engender a recurring nightmare – a childhood horror – that cannot be transcended or made fully tangible.

In Upseedaisy (2008), Ballen presents a row of family photos that have been circled. Simplistic drawings of faces that appear on the wall above act like a mirror of these portraits. They are refracted through a childlike lens. This is a recurring device in many of Ballen’s photographs, where childlike drawings offer powerful animated renditions of the objects in the frame. This seemingly naïve lens carries a kind of agency in the sense that this expression is unfettered by an adult sensibility which has a tendency to conceal and aestheticise experiences/emotions.

But these dark chambers that Ballen keeps returning to are not simply bad childhood’s remembered, the fictional element suggests that these are disremembered spaces. They are vaults within the mind where time, reality and space have collapsed or become distorted. Ballen assumes to present his viewers with documents that substantiate the existence of these intangible spaces where memory and longing intersect while simultaneously holding all the|untruths and malformations that place them beyond our reach. It’s a remarkable visual and intellectual achievement, which is founded on the blurred lines between the real and the fictional. - published in The Sunday Independent, December 5, 2010.
Posted by Mary Corrigall at 10:47 PM

Love your writing. Glad to have found your blog. Pity about the pink. Or is that an automatic governing mechanism to prevent the reader devouring all your writing in one sitting? Can't read more than three columns that are white font on pink background. My eyes belong to a painter.

Okay, okay will change the colours... I keep getting complaints from painters with sensitive eyes.