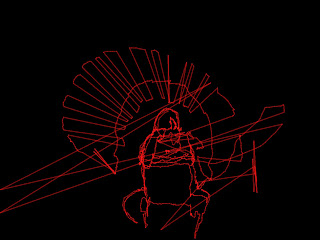 In this exhibition, this approach and his mark making has developed considerably. The pages are larger and the marks more confident and varied. He now also allows the motion of travelling through various destinations – Banff, Bergen, New York and Dakar – to determine the mark making. In this way the delicate and fragile lines are a direct result of movement, of the friction between Neustetter moving through the space. This slant to his project seems logical given that we never remain stationary in a space even if we inhabit it, consequently our experience of it is constantly being renegotiated. The style of the mark making – for there is a style even though it is random – is such that the short lines overlap each other, creating a sense that movement is never linear and that in attempting to reconcile ourselves with a space or place involves retracing or circling the space.

Because the lines tend to converge in a central space – the limited dimensions of the paper contribute to this – there is also a sense that the experience of a journey, a space is like a tangled web that can never be fully understood. Neustetter submits himself to this notion quite fully. For him the process isn’t engineered to understand the nature of a place but to somehow tune into the essence that lies beneath physical appearances. For this reason the places that he maps are unrecognisable. The architectural characteristics that define New York and distinguish it from Dakar have been obviated because Neustetter’s exploration delves beneath this superficial layer.

His drawings/maps parade an organic sensibility; thus there is almost a sense that there is a logic to the randomness of the drawings. Some appear like dark crevices, others like soft short grasses or intricate spiders webs. There is a kind of poetry to them and to Neustetter’s mode of working, where he is both removed from the expression and wholeheartedly present.

Though the digital light drawings don’t possess these qualities, they echo the low-tech drawing mode in the sense that Neustetter accedes control to a software programme, which plots out digital maps that chart the placement of live subjects. Because this measurement tool is light sensitive, its path is determined by light.Neustetter moves torches around his subject’s bodies, forcing the programme to plot the spaces between them.The results are semi-figurative drawings that exude a cold, detached hand at work.

His reliance on the sensory experience of reality makes him the ultimate empiricist. However, the manner in which he surrenders to the irrational, the unseen, the chaotic and the unknowable defies this. That his practice moves between these two approaches is what makes it so interesting. - published in The Sunday Independent, November 21, 2010
Posted by Mary Corrigall at 10:43 PM