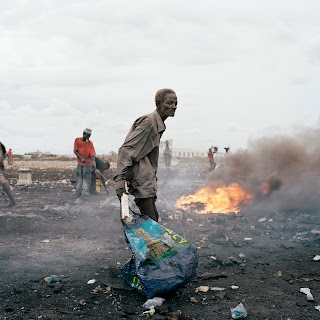 
Based on this series it seems as if First and Third World societies are distinguished by their technological advancement. However, Hugo also undercuts this notion by presenting a photograph of a man listening to music on a digital device. Consequently it is implied that the folk who mine this digital dumpsite are also consumers of digital products. Livestock wander across the market, implying that this is some sort of agrarian rural community, but in the background is a high density urban setting. In this way the urban and the rural, technological advancement and poverty all sit side by side, expressing the hybrid nature of African societies. The urban backdrop also ensures that the otherworldliness of the market, which infused with smoke and fire engenders allusions to a post-apocalyptical setting, isn’t completely located within the realm of the metaphorical.

For there is a kind of poeticism inherent in these photographs. This seems an incongruent observation given the subject matter. However, the scale of Hugo’s portraits and the drama inherent in the setting creates an immersive experience for viewers. The inert and contrived poses his subjects strike also work at ensuring that these scenes operate outside of the reality. All of this allows this series to vacillate between the real and the metaphorical.
The subjects of Hugo’s study appear like abject victims of a cruel and unequal world. This smoke-filled setting could easily be a modern rendition of Dante’s inferno. Nevertheless his subjects seem to be able to claim a degree of agency; though they are lumbered with disused goods that have no immediate use, they have found ways of extracting the “natural wealth” they contain. They are like miners: digging past the plastic exteriors of objects in search of the precious items hidden within. Though the process is harmful to the environment, and possibly their health, the point is that they have found ways to exploit the situation.

Adaptation is an underlying theme in this series and is most succinctly expressed through a photograph of a man sleeping on the edge of a hard, low wall. This man has found a way to condition himself to survive. This is both inspiring and tragic.

Undoubtedly this series is one of the strongest bodies of work that Hugo has produced, and it is classic Hugo in the sense that he foregrounds the otherness of his African subjects and settings – a fact that has never made him a firm favourite with the local arts intelligentsia. It is widely thought that it is this characteristic that has made his work popular with international buyers, who favour stereotypical representations of the continent. This series may present images that conform to that stereotype but the pointed remarks it makes about the West do complicate that view. Though this does suggest that the West continues to shape conditions in Africa, which is disempowering for Africans, there is a certain irony in European buyers purchasing art which documents the consequences of their activities.
Posted by Mary Corrigall at 10:49 PM

Don't you think Hugo is too preoccupied with estheticizing poverty? And do you think there is a problem with that? Is he himself not a harvester of images which he sells at exorbitant prices? Does any of this profit go back to the individuals? Should any? Do they know why he takes their photographs?

I somehow start to think that Hugo plays the role of the above Westerner quite beautifully, albeit in the name of "art".

I find his work at this point in his career repetitive and stylistic, and his "theme" or "content" also cliched and the schtick getting somewhat tired. But I suppose it sells.

I would like to compare his work to that of Sebastao Salgado to test the points above, but I am afraid its a no contest in favour of Salgado.

is this 'new' work of Hugos not a little too close to that of Edward Burtynsky - too close anyway not to mention him as a vital forerunner and direct inspiration?

Thanks for your comments and engaging feedback. @Roelof, yes he does aestheticize poverty - hence I suggest that he serves up stereotypical images of Africa. However, I don't want to get too caught up in comparing his work to Salgado (which feels very idealised and contrived) or Burtynsky (who may well be a forerunner but then so could Kay Hassan be, who made a video work of impoverished people scavenging off a dump site in Joburg - showed at JAG during his retrospective). In the space of this review, my aim was to unpack his work, not that of other artist's, and to assess whether he is growing, which I think he is. I did actually find this work over-simplistic in the sense that the discourses that it adresses were quite obvious.

"I did actually find this work over-simplistic in the sense that the discourses that it adresses were quite obvious."

I appreciate it may hard to comprehend from the perspective of willful-obscurantism-posing-as-depth school of art chat, but the vivid representation of bare realities is never simplistic. Rather, it is the reduction of complex images into classroom 'ideas' that is quite obvious.

Do you think Hugo saw this body of work before he did his?

I find this image of hugo interesting...why? It was taken by black photographer Pogus Caesar.