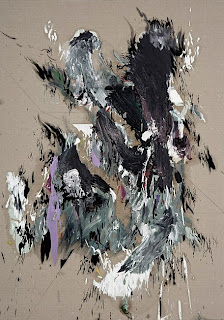 Ed Young’s recent 'review' of Zander Blom’ s latest exhibition, PAINTINGS. DRAWINGS. PHOTOS at Michael Stevenson, which appeared on the Mahala website is a prime example of why artists should not review their contemporaries work. Not that I would classify Young’s perfunctory musings as a ‘review’ – he never actually engages with the art. God forbid that he does; he would risk actually discovering that it has some kind of intellectual substance that would force him to write more than ironic sentences engineered to demonstrate how amusing he is – how detached he is from the art and maybe art in general. Young is so post-postmodern.

This brand of writing is not exactly out of keeping with the Mahala approach, where the writers are often concerned with being quirky, amusing and ironic. Thus form takes precedence over content. I suppose this style is engineered to appeal to the youth, who are more impressed with amusing turns of phrase than whether the phrase is illuminating in any way. This is very egocentric writing; it’s all about turning attention on the skills and persona of the writer than the subject-matter at hand. Hence Young's article/commentry is really about Young.

Very often writers fall back on this position as a way of avoiding engaging with their subject-matter. In the realm of arts writing it is often employed to mask their inability to grasp the work at hand.  Because this kind of writing is entertaining it has its place. As a writer I do value this kind of showmanship, have been known to engage in it frequently myself and thus do actually enjoy perusing the Mahala website and admire the product that Andy Davis has crafted.Sometimes this approach to writing works and at other times it feels terribly awkward and self conscious.

It can also be pretty frustrating when you actually want to find out something substantial about the work/subject that is being written about. Such as Blom’s exhibition. I haven’t seen it and probably won’t visit Cape Town before it closes. I cannot, however, vicariously enjoy Blom’s work through Young’s writing. Young is so dismissive of Blom’s art that you can’t help but feel that professional jealousy is at work. As Young expresses, clearly all the boys in Cape Town are in a tizz that Blom got the call from Michael and they didn’t.  Young wryly observes this fact, but the effort that he goes to, to demonstrate how vacuous Blom’s art is, implies that Young believes that the attention  Blom’s work has received is thoroughly misplaced. Young has every right to feel that way; but I do wish he made a substantial argument to back up his opinion.

In absence of this argument and his obvious ignorance about Blom’s approach  - more later – one is left with the impression that Young’s statements can be put down to sour grapes.  Though I have not seen Blom’s exhibition from perusing the Stevenson website I am able to discern two important points about the work that seem to have gone completely unnoticed by Young. Firstly, the text, the artist’s statement that Young so keenly quotes, is, I would surmise, given Blom’s reliance on text and his interest in how it contextualises art, is part of his artworks. Before, Blom presented text in the form of a monograph (in Drain of Progress) and in The Travels of Bad, he attached the text to the bottom of each photograph. In this exhibition it is embedded in the work in such an understated but appropriate way.

Thus Blom’s artist statement should not be taken at face value. It is not about illuminating Blom’s actual intentions but is designed to refer to the process and narrative around his paintings – in other words it is a fictitious (though paradoxically also real) narrative that has informed the abstract paintings.  You see, Blom isn’t interested in abstract painting per se but the romanticised story of abstract painting, how it is positioned within the grander narrative of the history of art and how this overarching narrative shapes the way artists conceive of the act of painting. In this way, paintings become documents of a way of thinking than artworks in their own right; they are symptoms of a larger phenomenon. Hence the title of Blom’s exhibition: Paintings, Drawings, Photos, which relegates these artworks to banal documents that can only be distinguished by the differing mediums.

Another important development in his art, which brings him sort of full-circle back to the Drain of Progress, is the way in which he has separated out his paintings from their ‘canvases’ – the walls of his house in Brixton. Here the canvas – the wall and ceiling – has a life of its own and as Young notices is quite visually striking in itself. Here Blom seems to be suggesting that the natural trajectory upon which abstract art was following should have concluded with the canvas itself – for isn’t this the most essential element of painting beyond the paint?  Of course, artists didn’t ever follow abstract art to its natural conclusion for if they did they would obviate their role in art completely (hence the “black hole” title that Blom employs). Its kind of amusing that the ‘black hole’ of art is actually a pristine white surface that appears to have no depth. But maybe it should all have been about choosing your canvas – which is what Blom expends much energy doing. Not only selecting one that is personal to him but one which he can study at some kind of length and which has visual pleasures of its own.

I gave Blom’s last exhibition a lukewarm review. But, I do feel quite fired up about his work again. I do hope that this exhibition travels to Brodie/Stevenson so that I can view it in person.

There is just one last and important point I would like to make; some artists write great reviews. I am thinking here of Michael Smith and Chad Rossouw (aka Robert Sloon), who wrote a magnificent review of Pieter Hugo’s recent exhibition in the M & G, but there are many others too.
Posted by Mary Corrigall at 10:34 PM

only recently discovered your blog and have been reading it retrospectively for past couple of weeks now. great work, thanks for the effort taken in your responsible reviewing. Jacki McInnes

Very interesting article.
Will definitely read more of your work, if you could please reconsider your font colour. The white on black really reads difficult..and freaks out ones eyes :)

Hi! You certainly have a new fan!

One request though - as mentioned by the previous commentator - please reconsider the font colour and jarring background pattern? I realise that this is not a design blog, but my twenty-something eyes started feeling like they were crowning eighty after the first paragraph... It makes it hard to concentrate on your writing and that is a terrible pity. :)

Thanks for all the feedback. I have changed the font colour to grey, instead of white but it doesn't seem to be having the desired effect.. will make some further adjustments; I would hate the design of the blog to impede people's reading