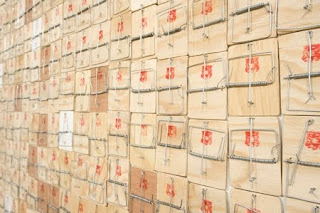 The title of Riason Naidoo’s first major exhibition at SANG, Pierneef to Gugulective implies that while the discourse on South African art ‘begins’ with Pierneef, Gugulective in some way present or encapsulate our artistic trajectory in the present-day, the now. I have yet to see Naidoo’s exhibition – I will be in Cape Town soon and will be reviewing it for the Sunday Indy – so I haven’t a clue what this definitive Gugulective artwork/s might be, but suffice to say Naidoo has conferred this Cape Town-based artistic collective with some kind of import. Certainly it created some level of interest in their show titled Ityala aliboli/Debt don’t rot, at the Goodman Gallery Project Space at Arts and Main, which I had a look at this week.

This exhibition was significant to me for another reason. Earlier this year when I penned a trenchant opinion piece on the Arts on Main phenomenon in a column for Art South Africa, I more or less chided  Liza Essers for setting out to establish a space for cutting-edge new talent and then opting to show bankable names like Kentridge and Goldblatt. To temper this criticism I reminded readers that the space did host a segment of Simon Njami and Bettina Malcomness’ Us – the bulk of the show was staged at the Johannesburg Art Gallery - which I suggested did in fact include rising young talents who were not regulars on the commercial gallery circuit. As an example I cited Gugulective, who showed Amanzi Amdaka at the gallery.

So naturally, when I saw that Gugulective would be enjoying their own solo exhibition at the Goodman’s Project Space at Arts on Main, it crossed my mind that Essers had acted on my observations. Buoyed by the idea that the Project Space was shaping up to meet its original mandate, I arrived at Arts on Main feeling optimistic and with my little notebook in hand was committed to writing an in-depth review of the exhibition for the newspaper.

But my notebook remained empty.  There was nothing that I wanted to say about the work – other than that it was one-dimensional and dull. I did another turn in the gallery, perusing the enlarged prints of old money. On the bottom of the prints were deep etched photographs of people queuing. Yes, the prints did in fact articulate the exhibition’s stated theme, described by the gallery press release as “a postulation on the innocent, the marginalised and poor through the confrontation of the idea that South Africa’s economic crisis predates post-1994”   - but what an unimaginative and obvious expression of that idea. As were works made from “rat traps” embossed with the old government’s insignia.

What could I possibly write? As I drove through the city back to our offices on Sauer Street I pondered not on the work I had seen but what happens when a group of artists working on the periphery of the art scene find themselves at the centre – does this immediately undercut their arguments – especially when they are said to be concerned with articulating the woes of the marginalised?

Furthermore: does their work lose its edge when it is shown in a conventional gallery space? In other words would this exhibition have had more significance if it had been shown at Kwa-Mlamli’s Shebeen in Gugulethu, where they have shown before? Is Gugulective’s appeal – particularly to the white dominated art world – founded on the environment in which they created and displayed their work rather than the work itself?

Fact is when an art object is displayed in a gallery space, it has to meet quite a different set of criteria - it is beholden to a canon, a history. Certainly a critic has this in mind. Based on the work on show at Goodman Gallery's Project Space I would venture that Gugulective are not ready to do a solo exhibition - even in a supposedly experimental space. If only the work was experimental.
Posted by Mary Corrigall at 2:25 AM