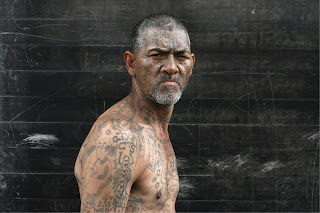 A couple of weeks ago I participated in a conference dedicated to photography in Cape Town dubbed the Beyond the Racial Lens: The Politics of South African Documentary Photography, Past and Present. As I was one of the last speakers at the conference I attempted in my talk, titled Circling sights of Trauma: Representations of Abjectness in Contemporary South African Photography, to address some of the issues that had dominated the three-day conference and comment on the photographic works on display in the adjoining Bonani Africa exhibition.

While judging the 60-odd essays for the competition a number of glaring commonalities became apparent to me. Perhaps the most obvious, and to a certain degree predictable, and one which dominated discussions at this conference was  the photographers inclination to train their lenses on societies or individuals located on the supposed ‘fringes’. During the conference Thembinkosi Goniwe rightfully lamented the fact that the more carefree and ordinary aspects of black life aren’t given expression.

Referencing a photograph taken by Bob Gosani in 1954 which features a pair of untroubled lovers locked in an embrace I suggested that such representations had existed during the most difficult period of our history. However, they weren’t innocent depictions;  in that era they also functioned as  “a political statement; a statement of defiance. By demonstrating that love continued to flourish in spite of oppression made clear that apartheid and the Nationalist government couldn’t control every aspect of life. Thus such images implied that the system could be overridden. Depictions of love in our era carry a different message. I believe that they articulate a kind of erasure, a denial of a hidden truth. Thus it is no longer a visual motif of defiance but one of denial.”

Drawing from Darren Newbury, author of Defiant images: Photography and Apartheid South Africa  who suggested during the conference that reoccurring motifs in documentary photography were driven by the photographers desire to identify an expressive form that articulated a condition beyond the visual cues it harnessed, I proposed that “a new generation of photographers have chosen to amplify the abjectness of the downtrodden to give expression to a particular condition that might evade visual articulation.”
Thus I  suggested that the leitmotif of “abject figures in bleak dysfunctional environments… provided a way of expressing a pervasive social illness that is not limited to disempowered figures. The constant repetition of this motif is evidence of a damaged society, who in the aftermath of trauma… keeps revisiting the site of trauma in an effort to finally exorcise its hold. However, as the sites of our suffering and our guilt are no longer tangible or physically traceable perhaps we seek out equivalent environments where we can replay our collective traumas, in the hope that we might arrive at an alternative conclusion.”

Below I reflect on the conference in The Sunday Independent:

In an attempt to circumvent this tired polemic, John Peffer, an American art historian and author of Art at the End of Apartheid, suggested that it would be more useful to view the photographic image as one that enjoys mobility within the broader terrain of visual culture. Attention should be directed on the ways the meaning of the image shifted as it moved into different realms, he implied.

Referring to the canon of Drum photography he demonstrated the ways in which images were constructed so as to be more visually appealing. For this reason Newberry suggested that the legacy of Drum had been “misremembered.”

Riason Naidoo, director of the South African National Gallery, echoed this view with a presentation of Drum photographs that documented the lives of Indian South Africans – a body of work that has been sidelined in favour of dominant narratives around black resistance.
“So much archival work still needs to be done that will transform our understanding of and imagination of this period of South African history,” observed Dr Jon Soske from the Centre for India Studies in Africa at Wits University.

During a discussion titled  “Photography and the New Archive: Image, Memory, Museum” it became obvious that the act of archiving is one fraught with difficulties as is the act of rewriting history or establishing a “new” archive.  One of the challenges is the fact that archiving has an inbuilt contradiction; that while it is meant to restore or preserve history it similarly “constitutes a removal”, said historian Ciraj Rassool.   Attempts to rewrite colonial narratives often brought historians full circle, resulting in a situation that would culminate in “new forms of subjection,” observed  historian Premesh Lalu. Much of the discussions mined the past, but a number addressed present dilemmas and trends in photography.

That audiences for photography are predominantly the white middle classes presented a problematic trend, given that images of marginalised and disempowered black people have emerged as a predominant motif, not only in the work displayed at the Bonani Africa photographic exhibition but in much of post-apartheid photography.  Though artist and academic Thembinkosi Goniwe reminded audiences that this phenomenon is partly due to the fact that a huge majority live below the poverty line, he lamented that the more carefree aspects of black life haven’t been given expression.

Reflecting on the work of Pieter Hugo, artist Zen Marie suggested that perhaps it was through images of impoverished black subjects that white artists were navigating new ways of imaging the self. Marie’s presentation of the work of a new generation of African artists employing photography in their art, such as Samuel Fosso, Aime Ntakiyica and Tracey Rose, demonstrated that artists were keen to turn the camera lens on themselves to challenge fixed notions around black identity. This implied that distinctions could be drawn between the way artists and so-called documentary photographers manipulated the medium of photography, which brought the discussions at the conference full circle.

* The image above was one of the entries in the Bonani Africa Photography competition. It is part of a series by Araminta de Clermont
Posted by Mary Corrigall at 8:20 AM