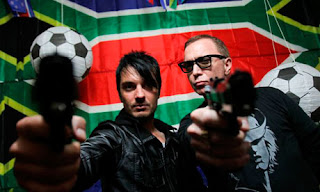 Like a devout Catholic visiting St Peter’s for the first time I stood below the Hillbrow Tower transfixed, marvelling at its wide concrete trunk. It was a novelty to be viewing this quintessential feature of the Joburg skyline close up, on foot. For a born and bred Joburger, such an experience is akin to “coming home”.
Like most Joburgers, my more recent forays into Hillbrow have been from the safety of a speeding car. From this vantage point you can’t glean very much – and I never dreamed that this would be a disadvantage.
Hillbrow might once have been a desirable spot, when in the seventies Italian, German and Portuguese immigrants installed European café society culture into the suburb, giving it a distinctly cosmopolitan feel. But in the late eighties it began to undergo a shift when an influx of South Africans looking to escape violent upheavals in the townships settled in the suburb and surrounding areas. By the late nineties Hillbrow had become home to a new set of immigrants; this time from the rest of the continent. Buildings were hijacked by thugs, landlords reneged on their responsibilities, the municipality cut off basic services and the physical appearance of the neighbourhood deteriorated dramatically.

For those who recalled a carefree youth in the area, the deterioration of Hillbrow became emblematic of the social and structural degeneration of the inner city, a consequence of a new political (dis)order. Guy Tillim’s sombre photographic essay, simply titled Joburg, which documented the grimy dilapidated interiors and exteriors of this collapsing urban landscape, encapsulated the degradation, unwittingly confirming that this European foothold had been lost. Submerged in a process of urban entropy it had become a locale for the impoverished, the disenfranchised and the dejected.

While reports about the Johannesburg Development Agency’s Better Buildings project, an initiative to reclaim, restore and reinvigorate dilapidated edifices in the suburb, surfaced, negative perceptions about Hillbrow have remained steadfast. But, of course, just as the rest of Joburg is constantly being reinvented, so too has Hillbrow’s character been steadily shifting over time. It’s just that no one noticed or cared; photographers and journalists have a keener interest in neglect and degradation.

The X-Homes project, an unconventional performance art initiative-cum-tour of the suburb funded by the Goethe Institute and curated by Christoph Gurk, offers us an in-depth and multi-perspectival view of Hillbrow. On foot. We might be observing life in this suburb but we are steeped in the action we encounter, which both confirms and contradicts the stereotypical ideas of the suburb. It’s not a one-dimensional place.
In a dagga smoke-filled flat we encounter a young woman who leads us into her bedroom. She puts us at our ease, addressing us as if we are prospective tenants. We begin to imagine life in this cramped flat that houses five young people. Makeshift bedrooms are created in the lounge area. Heavy fabrics hang from the ceiling, demarcating the different sleeping areas. Two young men are passing a joint. When I ask them what they do for a living they shrug their shoulders and laugh. The young woman’s boyfriend grows angry and starts to beat her. A knife is drawn and we are quickly escorted out of the flat.


Although we know that the scene hails from playwright Paul Grootboom’s imagination, we are shaken. Earlier, in another Hillbrow flat we had been treated to an emotive jazz interlude, which centred on demonstrating that Hillbrow’s bohemian character is alive and well. It had softened our opinion of the neighbourhood. Grootboom’s mini drama reminded us of Hillbrow’s dark underbelly. The bad element that stalks Hillbrow isn’t always hidden from sight. As we pass through one busy street corner we encounter a group of Nigerians clearly up to no good; their eyes are trained on an expensive camera that one of the journalists in our group is carrying. But their transparent motives make it easy for us to shake them off our tail.
This is an isolated reality; mostly, as we walk through Hillbrow, we don’t feel under threat. When we traverse a park on the way to another flat in a high-rise apartment block we pass a group of men embroiled in a gripping card game; they look up at us and smile, making us feel welcome. Though we feel uneasy about our tourist-like status there is no sense that we are impinging on foreign territory. But we are readily noticeable – our white skins are a giveaway, drawing attention to us wherever we go. Whites are rarely seen walking around the suburb. Magufulo Mbonisi Phakathi, one of our guides, suggests that Hillbrow’s inhabitants are encouraged by the sight. He implies that the presence of whites means that entrenched boundaries are dissolving.

In this country tours of impoverished and undesirable neighbourhoods are not a novel phenomenon; township tours are a popular diversion for curious whites and tourists. But like Tillim’s photographs, these kinds of tours offer uncomfortable voyeuristic voyages in which the impoverished subjects loom as abject figures framed within a narrative of the viewers’ making. In an effort to circumvent this actuality Gurk offers fictional performances that straddle the boundary between theatre and performance art. They are staged in real people’s flats all around Hillbrow. In between these uncanny vignettes is the real Hillbrow, where true life stories are playing out on every corner. Life in Hillbrow happens on the streets. Because most of the buildings are made up of small bachelor flats, which often must accommodate more than a “bachelor”, young people opt to hang out on the street. Groups of young people use walls and railings to prop themselves up while they shoot the breeze. Some smiled and waved as we passed. Others looked slightly perplexed.

Hillbrow is much more tranquil and tidier than we expected. There is hardly any rubbish in view. This is attributed to a fastidious and regular street-cleaning service, which moves through the suburb three times a day, according to Phakathi. This continual and perhaps obsessive attention to tidiness can no doubt be attributed to a desire to disrupt the seemingly unshakable notion of Hillbrow as a grimy locale and the psychological associations it evokes. Dirt and waste are commonly equated with malevolence and disempowerment.

Such perceptions aren’t just held by outsiders but have been internalised by those who dwell in the suburb. Those who live or have lived in Hillbrow have found it hard to think of this neighbourhood as anything other than a transient pit stop, proposes Linda Michael Mkhwanari, who has lived here since 1998.
“People live here on their way to somewhere else. When you encounter people who have lived in Hillbrow they say that when they lived here it was while they were ‘just fixing up their lives’. People forget to make this place home. We need to find a way to do that.”

Hillbrow is an inhomogeneous terrain. Each of the seven buildings and locales that we visit during the X-Homes tour parades its own character. That’s not to say that there aren’t some similarities; few buildings have working lifts, and visible rules, posted on boards at the entrances, govern entry. In one building a sign parades a rule that asserts that “no visitors may sleep in the building”. To gain entry into another building we have to stand in front of a dark window and show the band around our wrists that serves as our “ticket” for the tour. We can’t see who is watching us; we simply move on when we hear a deep voice emanating from behind the screen. Clearly, home life is heavily regulated in this suburb. Perhaps that is why some inhabitants struggle to forge a long-lasting connection to this place.

We feel safe in Hillbrow. We turn this incongruous idea over and over in our heads before we vocalise it. We are almost giddy with surprise when we declare it. We feel slightly foolish too; though a face-to-face encounter with Hillbrow on foot has demystified the suburb, we question the root of our beliefs.
But, of course, this is no ordinary encounter with Hillbrow. We get to spend time in ordinary homes - even though we are presented with contrived expressions of the inhabitants lives.  Our experiences are also mediated via seven performance artworks that illuminate different aspects about the neighbourhood – and ourselves.

When we followed a young performer into a dilapidated art deco-esque building, she attempted to describe what it might have looked like at the apogee of its lifespan. A time when the white marble floors where pristine and the decorative railings up the staircase weren’t chipped and weathered. She interrupted our nostalgic reverie, however, to remind us that Hillbrow’s glory days were not as glorious as we recalled; for those of colour were excluded from inhabiting this environment. Other performance works are more abstract and have a less didactic spin, such as Athi-Patra Ruga’s performance in a basement of a makeshift boxing club in a disused petrol station.

We felt like we were travelling into the bowels of Hillbrow as we descended a rickety, uneven staircase into a dark basement. There, Ruga had recreated the interior of a confined flat and concealed behind a panoply of coloured balloons he posed as its frustrated inhabitant, whose television functions as a window to the world and an escape from his own. He also evinces an awareness of his subjectivity and engages in a playful strip show behind a screen, bringing the politics of viewing and consuming the lives of the impoverished other sharply into focus. He achieves this by offering to expose his most intimate self.

Voyeurism is a recurring theme in the X-Homes tour. Bruce La Bruce, the Canadian filmmaker and performance artist, cheekily plays with this theme in a performance involving two young men dressed in soccer gear, who pretend to fornicate on the bed in front of us. In one flat that we visit the tables are turned on us when we are given an array of puppets and props and are told to entertain the inhabitants.

After hours of moving between fictional and real realms the boundaries between the two began to blur and the life on the street began to appear like a performance, while the constructed dramas in the flats started to feel authentic, which sometimes they were. This pushed us into a liminal zone that seemed to dislodge our preconceived notions, allowing us to inhabit Hillbrow quite freely and without baggage.

It was nearly 8pm when we made our way back to our cars after the last performance at the top of a hotel, where we glimpsed one of its legendary inhabitants: an old white woman who has remained in Hillbrow through all its incarnations. She eats dinner at the hotel every evening.

We don’t want to leave Hillbrow; it comes alive at night. All the shops are open. Salons are busy. Outside mobile phone repair shops are small tables on which the inner guts of these modern necessities are laid bare. Hillbrow has not been lost; its vibrant, cosmopolitan character continues to exist.


*Bruce La Bruce pictured above with another perfomer
Posted by Mary Corrigall at 8:03 AM

I continue to be entertained and enlightened by your forays into the South African art experience and look forward to your next posting.

Keep up the good work!