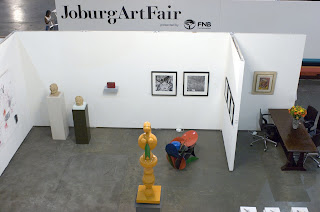 Ross Douglas probably had a stiff drink before he made his way into the Circa gallery Thursday last week. Inside I was waiting to give a talk on art and capitalism where I would be joined by David Brodie, Kobie Labuschagne, Marianne Fassler and Douglas in a panel discussion. It was part of a Johannesburg Workshop in Theory and Criticism programme organised by Achille Mbembe and Sarah Nuttall of the Wiser Institute at Wits University. The audience were PHD students drawn from a number of disciplines.

Brodie took on the persona of the unapologetic commercial driven art player, confessing that gallerists were like drug dealers in the sense that they pushed their products on consumers, ensuring them that the brand of art that they were peddling would “make them feel good.”

It was satisfying to see that Douglas was no longer selling the art fair as an educational event  - but, of course, he continues to imply that the art fair is a much better alternative to a biennale. Douglas doesn’t get it and probably never will.  Brodie was quick to remind the audience – and indirectly Douglas too – that biennales and art fairs cannot be uttered in the same breath; they are completely different kinds of events with different objectives.

Much to everyone’s surprise I didn’t talk about the art fair at all;  the interaction between art and capitalism is too obvious in that context and as an event that only takes place once a year its effect is minimal. We haven’t quite reached the stage where artists are producing art-fair-art - although I dare say we are heading in that direction.   I am more interested in the more nuanced and covert ways in which commercialisation shapes art production – such as corporate sponsored art competitions and corporate patronage. One of the questions that we were asked to address in our talks required us to reflect on the ways capitalism permeated art and how it might corrupt the purity of art – the implication here was that this economic paradigm and art were mutually exclusive.

This was my response:

“It is impossible to delineate or characterise the nature of ‘pure’ art because such an idea is driven by reductive or a modernist notion of what defines art. Within this discussion I would venture that pure art might refer to art that evidences aesthetic autonomy; in other words art that hasn’t been shaped by the demands of the art market. However, realistically an artist would have to be producing art in complete isolation from the world to generate this kind of art.
Plainly put, in this era of accelerated commercialisation it is impossible to demarcate the exact sites/instances upon which capitalism penetrates artistic practice; I think most theorists agree that while art has symbolic and ideological value it similarly is a commodity within an economic circuit of exchange.

As an art critic, my focus is not to map and guard the borders of so-called ‘pure’ art fending off capitalist incursions, rather my interest is in discovering the ways in which this paradoxical aspect of art manifests in practice, and how different commercial settings, such as at an art fair, where an artworks monetary value is foregrounded, shape how art is read.”

Drawing from Bourdieu, I nevertheless reflect on the role of the art critic plays in ensuring that art is an activity positioned outside the boundaries of a capitalist paradigm:

“By highlighting art’s transcendental and intangible qualities the art critic unwittingly ensures that the illusion of art as a unique commodity unlike any other is maintained – one’s use of a high brow vocabulary and concepts that might not be readily grasped by the public ensure that art asserts its autonomy from the world of commerce. Thus any compromise to the language of criticism places art’s autonomy under risk. “

Naturally, art criticism is a product too and thus is subject to external forces that shape it’s production; in particular the vocabulary of criticism and it’s focus.

“Settling on an appropriate vocabulary in the mass media is a constant struggle which has become harder to resolve in the face of a populist brand of journalism in which entertaining the audience and holding their attention at any cost has come at the expense of quality reporting that might enlighten the reader.”


And here I weigh in on the pros and cons of the commercial art market in SA:

“The growth of the commercial sector of the art market since the advent of democracy has seen a power shift in which national and regional public art institutions no longer are the dictating authority on art. Given that many of these institutions were initially sluggish to transform in terms of widening the scope of their curatorial policies to include art and exhibitions of the work of previously marginalised artists, this actuality wasn’t necessarily a negative one – it has in some senses democratised art production, opening up discourses and allowing marginalised artists to enter the fray. Of course, the majority of these new galleries are white owned thus the power relations within this sector has remained skewed.

Because commercial galleries now hold the authority and under-funded public art institutions have become increasingly dependent on corporate funding, the brand of art that is displayed and celebrated is increasingly being determined by commercial factors or to meet the requirements of corporate sponsors. In other words art that might not be critically prized by academia, art producers or critics, is regularly given a pride of place in commercial galleries and other commercial settings such as at an art fair. This democratisation of the arts might have opened the once closed doors of the art world but it also means anyone with enough financial clout can dictate what kinds of art should be valued – often these individuals believe that their affinity for art automatically grants them insider knowledge of contemporary art practice. Thus the intellectual gulf between patrons and the arts intelligentsia is often quite vast.”
Posted by Mary Corrigall at 12:40 AM