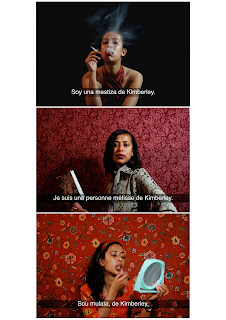 MINISTER of Arts and Culture Lulu Xingwana cast a dark shadow over the art community when she expressed her disapproval and aimed to censor Zanele Muholi’s photographs of lesbians and Nandipha Mntambo’s contentious Rape Of Europa last year at the opening of Bongi Bengu’s Innovative Women: Ten Contemporary Black Women Artists. While her prejudice against homosexuals was troubling, it was the threat of artistic censorship that really rattled this community. Thus her association with this exhibition, SPace, immediately established a sense of unease. Had the curators submitted to a form of self-censorship in an effort to appease Xingwana’s narrow views on art?

Was the absence of Muholi’s works significant? Would Mntambo’s striking Rape of Europa have made another appearance if Xingwana and the government and/or City of Joburg weren’t funding this event?
Fortunately for Thembinkosi Goniwe and Melissa Mboweni, the curators of this large-scale exhibition, Xingwana did not live up to her promise to open the exhibition and thus indirectly her personality and attitudes were distanced from the show. It also gave Goniwe the chance to slip in a disparaging remark about Xingwana on the opening night, which seemed to confirm that her uninformed presumptions about contemporary South African art might not have had any impact on their curatorial vision.

And a grand vision it was: not only is this mega-Pan-African exhibition supposed to give tourists visiting this country within the next month a taste of contemporary African art, but Goniwe suggested that their mandate was to reposition negative, stereotypical attitudes around the continent. In this way ideas underpinning
this exhibition echo the sentiments that were driving Simon Njami’s Africa Remix, which showed at the Johannesburg Art Gallery in 2007. And as such all the self-same criticisms that Africa Remix attracted. The main one being, of course, that  challenging attitudes about Africa with an exhibition that implies that the continent is a united, single entity is self-defeating as it immediately conforms to western notions that Africa is a single homogeneous destination.

It’s a conundrum for sure: how do you redefine Africa without referencing Africa?
The title of the exhibition, SPace, (the upper-case “P” is meant to draw your attention to the word “pace”, too, which operates as a sort of submotif) directly addresses the complexities of reframing an imaginative and physical position. Given the rather awkward exhibition space at MuseumAfrika, where this exhibition is staged, you can’t help thinking that it also makes reference to the difficulties of actually placing and displaying art in museums and the conventions that underpin this activity. Certainly Goniwe and Mboweni have aimed to challenge some of those traditions by ensuring that the themes and subthemes of the exhibition – pleasure, beauty and intimacy – do not overburden the art, in the sense that the artworks’ connections to these themes are subtle. But the connections are far too subtle; so much so that in some instances even if you stretch the meaning of a work you still struggle to fit it with any of the themes – this also isn’t helped by the fact that there is no signage demarcating which subthemes are in play where.

It is pretty difficult placing Avant Car Guard’s Resistance Art in South Africa, a black foam and enamel sculpture that appears like an anniversary cake, comfortably in this exhibition. It is a cheeky work that derides the lauded efforts of (white) artists to expose and challenge the conditions of apartheid through their art and is thus a joy to view again; but it’s hard to reconcile it in the context of this exhibition. There are many artworks at this exhibition that elicit the same response; great art, but how does it reflect on the theme? So often a curator’s vision silences the idiosyncratic character of an artwork – and perhaps this is what Goniwe and Mboweni tried to circumvent – but their hand in the curating is almost imperceptible.
Had the catalogue been launched at the same time as the exhibition, perhaps it might have shed some light on their choices. The display area – three rooms on three separate floors – is also far too roomy and the huge spaces between the works prevent any dialogue from occurring. As such, each of the works at this exhibition really exists independently of each other, which contradicts the main thrust behind group shows.

It is the latest instalment from Mary Sibande’s ongoing Sophie series that stands out. Called I decline, I refuse to recline (2010), the sculpture features the character of Sophie in a hybrid domestic worker uniform that this time appears like an open parachute that has just landed. It also parades padded elements that echo the design of a chaise longue, which is attached to the sculpture via some long strands of the same colour as the dress. The work quite brazenly protests against being interpreted; or at least articulates Sophie’s reluctance to allow her aspirations and dreams to be analysed. It could be read as a response to the ideas that art critics and observers have thus far projected on to Sibande’s alter ego.
Gabrielle Goliath’s artworks also are a star attraction. Her Portrait of a Woman (2010) consists of a series of close-ups of a person’s face, hands and skin, which are displayed on the ground and are covered by footprints. In this work Goliath meditates on the “human shell”, the soft exterior of the body, and while one would think that these close-ups would reveal a nuanced reading of an individual, they are such close studies that the subject’s individuality is negated. In other words, exterior characteristics do not offer any information about the individual.

Another particularly interesting work is Berry Bickle’s Between (2010) in which she mediates on the (unbridgeable) space between images and spectators. She expresses this idea in two ways: first by placing the backs of chairs – suspended from the ceiling – in-between the three films that are being projected on the wall, creating a physical division between the films and her audience. Second, the films show spectators watching films; and while they appear to be integrated with the films in one, the spectator moves up against the image as if trying to penetrate it, implying
that a barrier exists. In both instances, we as viewers become spectators of
other spectators, and so the divide between the image and the spectator looms even larger. This is an excellent work. Certainly, Goniwe and Mboweni have a refined grasp on contemporary art – even though they have an inexplicable weakness for Godfried Donkor. It’s such a pity, therefore, that the curation of this show feels incoherent and thus fails to achieve any of their ambitious objectives. - published in The Sunday Independent, 2010
Posted by Mary Corrigall at 12:37 AM