Reflecting on the Soccer Art Frenzy 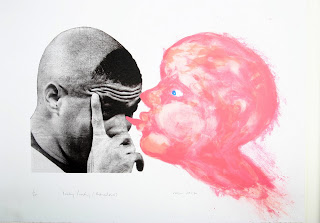 GIANT body parts are scattered all over the workroom. A colossal woman’s head is balanced on a stick while an artist bends over her, pushing her plastic eyes into place. Massive sets of hands sit on a tabletop. The fingertips have yet to be covered by tan masking tape, so you can see the plastic bottles that have been used in their construction. Long strands of coarse rope, which will be used as hair, cascade down a spiral staircase in the corner of the workroom. The artists barely look up when we enter. With over 30 giant puppets, or grand personnes as the French participants in the Giant Match project call them, to complete before
the World Cup starts, there isn’t time to indulge curiosity. This room is one of many workrooms that colonise the 20-storey Wits University corner building. Over 100 puppet makers have been toiling in these rooms and in the theatre across the road since mid-April. Their frenzied creative work is emblematic of the heightened artistic activities that have been manifesting all around the city of Joburg in the run-up to the landmark sporting event. Artists, actors, dancers, curators, choreographers and theatre producers have within the last year been focused on creating artistic products to complement or coincide with the event. Never have the two contrasting fields of sport and art shared such synergy. Given the amount and variety of cultural products that have been designed to be staged during this international soccer extravaganza, it would be easy to think that it’s not just a sporting event but a huge cultural festival.

Although the Department of Arts and Culture’s promise of R150 million to fund tournament-related cultural projects didn’t materialise in the way that it should have, the art community forged ahead with the aid of foreign cultural agencies such as the Goethe Institute and the French Institute of South Africa, (Ifas), and other government bodies such as the City of Joburg and the Gauteng Provincial Government. That such a diverse cultural programme will run alongside the World Cup is testament to this robust and determined community, accustomed to fighting tooth and nail to survive without national government support and their keenness to exploit the opportunity the event has presented to showcase cultural products.

Undoubtedly, such efforts evince that the arts are not only relevant, in the sense that this sphere is able to engage with sporting activities, but have an equally important role to play in major events. Almost every sphere of the arts is presenting work during the World Cup: there is the African Film Festival at Africa Museum, musical and theatrical productions such as The Boys in the Photographs, but primarily it is large visual arts displays that dominate, including In Context, a multi-media multi-venue art exhibition, Without Masks, a large Afro-Cuban exhibition at the Joburg Art Gallery, SPace, a Pan-African exhibition
at Africa Museum, the aptly titled This is Our Time, an exhibition spread across Joburg and Cape Town venues (Brodie-Stevenson Gallery and Michael Stevenson Gallery in Cape Town), Halakasha!, a soccer-themed exhibition showing at the Standard Bank Gallery, Harun Farocki’s Deep Play, also at Joburg Art Gallery, and the bi-national Brazilian/South African exhibition called The Eleven Football and Art – Africa 2010 x Brazil 2014.


In an effort to demonstrate the relevance of the arts and its integral connection to society many of these exhibitions make some reference to soccer or show individual works that meditate on some aspect of soccer or its cultural significance. An example is Philippe Parreno and Douglas Gordon’s 2005 video artwork Zidane: A 21st-Century Portrait, part of the In Context exhibit. In this work 17 cameras were used to capture footage of the famous French soccer player, which echoed society’s fixation with soccer heroes. While the work and themes informing many of the large exhibitions vary, shows such as SPace and In Context and even Without Masks parade a Pan-African bent, showing art from artists either around the continent or who form part of the diaspora and thus try to represent the continent and its expression.

In this way these exhibitions attempt to show the cultural connections beyond our borders that bind this artistic community to a global society. Proving, therefore, that our cultural products are not the result of a parochial or insular mindset; thus, underpinning all these exhibitions is a self-conscious awareness of how we are representing ourselves to the world. Given that the bulk of our international visitors are soccer fanatics, it’s not certain whether in fact they will be interested in art, even exhibitions like Halakasha! Which are completely centred on the sport.

When the Soccer World Cup was held in Germany, art galleries in that country put on large, expensive exhibitions but sat empty, observed a South African born artist who has been settled in Germany for over a decade. But Eléonore Godfroy-Briggs, communication and cultural officer of Ifas, believes it will be different here: “Foreigners are really interested in South African culture because it is so different from their own.”
According to Godfroy-Briggs, at least half of the 200-plus members of the French press who will be in the country during the World Cup are here just to report on cultural activities. The question remains, however, given that the exhibitions are geared for a foreign audience and many are soccer-themed, whether visitors and the foreign media will have an authentic view of local artistic production.
Furthermore, what value do some of these projects have beyond the event? And in particular,
what value do they have for locals?
When the World Cup ends and all the hoopla with it, will some of these exhibitions and projects have left a lasting impression?

When Ifas began planning its Giant Match project, one of the driving motivations was to create an initiative that would have a life after the World Cup, according to Godfroy-Briggs. So although the 30 giant puppets will entertain crowds as they move through the turnstiles at Soccer City on the day of the opening ceremony, they were primarily created to entertain township dwellers during and after the sporting event – the puppets will be part of a South African rendition of Romeo and Juliet. The idea is that that local performers, scriptwriters and artists will create new stories and present new shows with the giant puppets when the tournament is but a memory. Given that the project cost Ifas and the Gauteng Provincial Governmentover R5m, it is easy to understand the motivation for this imperative; that the investment have more long-term benefits for the participants aside from the transfer of skills. But the Giant Match project is one of only a few initiatives that will have any lasting benefits.

Standard Bank splashed out for the grand opening of Halakasha! with an almost obscene display, which included appearances by dancers, performers and high-profile African soccer players. Rather unusually, it also included a discussion between the soccer players Jay Jay Okocha (Nigeria) and South Africa’s Andre Arendse, Supersport presenter Neil Andrews and Achille Mbembe, a prominent academic and author. It was rare to see sporting personalities at an exhibition opening but the strained exchange made it clear that while both art and sport fraternities depend on corporate sponsorship from the likes of Standard Bank, they speak quite different languages. The tongue-in-cheek discussion also showed that the connection between art and sport is mostly superficial. Certainly the dialogue between art and sport that has been evolving in the past month is a oneway one; while curators and artists are able to reflect on the cultural significance of soccer, the soccer world and sporting fraternity do not have the means or medium for reflexive introspection that might enable them to engage with issues beyond their sphere.

Despite artists’ and curators’ abilities to engage with the cultural values implicit in soccer, there are instances when the theme is simply imposed superficially, like in Mzanzi’s production of Carmen, where soccer balls and vuvuzelas were used as an adjunct to the performance. Similarly, photographs and artworks simply depicting soccer balls and players without demonstrating an in-depth engagement with these motifs in any meaningful manner come across as empty gestures. The diverse collection of artworks at Halakasha!, however, offers insight into the role the game plays in society as the means through which gender and nationalism are negotiated. While some cultural producers, such as Constanza Macras with her Offside Rules, chose to exploit the metaphoric character of soccer, such as the way in which rules help regulate relationships between opposing or conflicting groups of people, other art products such as Halakasha! aim to uncover the cultural significance of soccer.

Fiona Rankin-Smith, the curator of the exhibition, primarily unearths its value by presenting
photographs from various eras and locales on the African continent documenting the dress and behaviour of soccer supporters. Largely it is documentary photographer Andrew Dosunmu’s portraits of fans in the build-up to the 2006 Africa Cup of Nations in Cairo that form the bulk of this kind of work. The embellishments, costumes and fanatical adoption of national colours worn by fans show how these sporting events provide a stage for people to identify and cement their national allegiances. Of course, this fact is not specific to soccer, nor is it an astonishing revelation. But this exhibition doesn’t offer a single perspective on the game. Through a series of commissioned photographs Zanele Muholi, the contentious photographer whose work caused a stir with Lulu Xingwana, presents portraits of female soccer players who appear quite androgynous. The suggestion is that this male-dominated soccer arena provides the stage where gender is determined. Rankin-Smith also establishes a sense of historical continuity between African material culture and traditions and soccer and the accoutrements its fans wear. A Mwana Pwo mask from Chokwe, Angola, echoes a mask that an Angolan soccer supporter wears in an image taken by Dosunmu. Given that both items pertain to a cultural ritual, the parallel between these areas of expression doesn’t appear misplaced. Perhaps the most striking aspect of soccer that this exhibit offers is the fact that soccer, like a religious encounter, offers transcendence. During a match individuals can surrender to the collective and transcend their personal identities, determined by religious, language or economic differences. It may be fleeting, but during the game these differences appear to be erased. If just a few soccer fans reflect on the mechanics of their fanaticism, the arts community will have achieved its own goals. - published in The Sunday Independent, 2010

* The above image is a Penny Siopis artwork that was shown at the Halakasha! exhibition
Posted by Mary Corrigall at 1:19 AM

I left a message on facebook. Looking to do an interview with you.