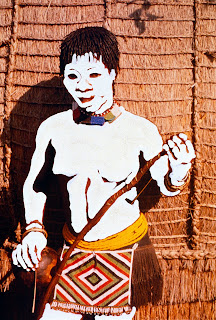 No essays were feverishly penned. No impassioned articles or e-mails were quickly dispatched. There were no public declarations of outrage. Nor did groups of art students flock to view the “offending” artworks. It seemed in the days that followed the opening of the In Context exhibition at the Arts on Main complex last month that the display of Candice Breitz’s Ghost series (1994-1996) had gone without much notice.

Had the 14 years that had passed dulled the works’ hard transgressive edges? Certainly it seemed as if the white figures that dominate in this series of artworks had truly become spectral characters, withholding the secrets from South Africa’s vexed past. More than a decade ago the Ghost series and Breitz’s Rainbow series were anything but unobtrusive; not only were they at the centre of an explosive polemic that rocked the citadels of art academia, but when the debate moved into the public domain, it posed the most fundamental questions that plagued post-apartheid identity: could white people identify with black people and did anyone have the right to represent another?

Answers to these questions weren’t easy to identify, causing the debate to rage for years, finally culminating in the publication of Grey Areas, a collection of essays. Does the fact that the Ghost series has not caused any waves a second time indicate that the discourse has become irrelevant? Breitz, who has since been settled in Germany for some time, was keen to find out.
“I have no idea what to expect. I was curious as to what it would be like to insert these works into this context at this moment in time. The recent fiasco at Constitution Hill (with Lulu Xingwana) made me wonder whether this particular dialogue remains relevant. For as long as the history of apartheid and questions of race continue to play a central role in our understanding of who we are, such conversations need to continue,” observes the artist.
So while the dust may have settled on the “Grey Areas” debate, Breitz obviously remains haunted by it. Certainly all spheres of cultural production in South Africa were implicated and affected by the debate; issues of representation are as pertinent to literature as they are to journalism.

Ironically, few involved in the debate had actually seen Breitz’s Ghost series – it was exhibited at the Chicago Project Room in 1998 but has never been shown on South African soil until now. As with her Rainbow series, the Ghost series was created by manipulating existing imagery. Breitz took ethnographic postcards of black women in traditional garb, of the kind one would find in a tourist shop, and with the use of Tipp-Ex she transformed the women’s bodies, turning the black women “white” – hence the ghost alluded to in the title of the series, which also referred to women’s lack of status.
“I wasn’t saying anything that hadn’t already been said at that moment in time. African women have largely been represented in the public sphere through their absence. “What those works did was to very simply make the absence visible and to project the presence of the represented women as an absence. These kinds of images of black women (that I presented) are ultimately less about the women portrayed than they are about the white photographers who sell the imagery to white tourists with their particular ideas about Africa.”

Okwui Enwezor, the African-born New York-based art academic, saw Breitz’s work from quite a different perspective and articulated his opinions in an essay in the art journal Third Text. He felt that by using negative ethnographicimagery Breitz was perpetuating the existence of such pejorative imagery, which he felt presented the black subject at the “liminal point of (his/her) defeat”. Thus in this way Breitz was indirectly maintaining black people’s lower status within the hierarchical structure that apartheid had set. Furthermore, he felt that Breitz could not justifiably speak on behalf of black women, even if it might be to raise awareness of the ways in which their subjugation was perpetuated via stock imagery. He felt that in so doing Breitz was overidentifying with black women – this was more particular to her Rainbow series, in which pornographic imagery of white women were spliced with images of black women in traditional outfits. He proposed that this form of identification conveniently allowed Breitz and the other white artists who were targeted in his attack to negate their complicit role in the apartheid system.

Today Breitz still vehemently disagrees with Enwezor’s point of view.
“It wasn’t about putting myself literally in dialogue with black women; it was about looking at how black women and white women were typically represented. To try and forge a space of identification does not necessarily mean that one is washing one’s hands of the past. I think it is possible to maintain both positions.
“Surely if you can acknowledge an active or passive guilt… the next logical step would be to try and step beyond those boundaries; does that necessarily entail a form of erasure? That was one possible reading at that moment in time. Frankly, I doubt that Okwui (Enwezor) would hold firm on it today.”

In retrospect, however, Breitz understands that the dialogue that her artworks elicited were inevitable.
“It was important that that debate happened at that point… regardless of how my work was framed within it; it was a very urgent conversation at that moment (in our history). I don’t think that it could have been any other way at that moment.”
One of the drawbacks of the Grey Areas debate was that it wasn’t very refined and it remained limited, suggests Breitz.
“It tended to be specific to the extent that there was not sufficient acknowledgement of the fact that the questions which it raised had/has a broader relevance. Obviously it’s productive to start any discussion by addressing specific examples, but in fact those questions around subject formation and identity and what is ‘representable’ resonate far beyond the South African context.”

Artist Minnette Vári came under criticism at the same time as Breitz, specifically for her Zulu series, in which she, too, appropriated ethnographic postcards of Zulu women in traditional settings and costume. They were contrived images conforming with notions of black South Africans as “tribalised primitives”. Vári altered one of the images by transposing her face onto the face of one of the Zulu women. Vári concurs with Breitz’s notion that the debate that their work ignited wasn’t nuanced but she also suggests that it has not developed since then.
“The debate never came to any adulthood. The original players have all moved on… and I don’t think that it has been taken up by subsequent artists in any meaningful way.
“Not that I would expect that because these are all people coming from totally different backgrounds. I also have a sense that that was a time when we could use such language; we were all inflamed by the idea of identity and who has the right to own and represent.”
Vári suggests that her own engagement with issues of identity at that juncture in her career was “crude”.
In works such as in the Zulu series she says she was looking to discover who she would have been had she been born black. “How would I look? How would I present myself ? That preoccupation had some very problematic ingredients.
“The images were truly startling on many levels and I don’t think I understood it.”
For Vári those works were less about representing blackness and more to do with unpacking the politics of whiteness.
“I wanted to invent a me that was more African than I felt. As Kendell (Geers) said in a piece long ago: every time he tells someone he is African he feels like he is lying. I feel the same.
Those works were a clumsy way of finding that identity.”

The strong backlash against Vári and Breitz’s “clumsy” attempts to reconfigure their identity in the face of a new political dispensation, which had compelled their work, had a dramatic effect on their art. Breitz, who was living in New York, ceased making work that engaged with South African issues, choosing to rather embrace a visual language that exploited the universal lexicon of American popular culture. This was obviously also compelled by the new environment in which she was now established.
“It was not a conscious or strategic decision; I was no longer connected to South Africa in the same way and felt that I could no longer authentically voice South African issues. I became interested in exploring trans-national forms of language as these impact on all urban contexts at large.”

For Vári, who was “mute with shock” when the debate took hold, it prompted a long period of
self-reflection. “I found it terribly distressing to be so misunderstood.”
Vári’s Zulu series and other related works were never exhibited again. But what Vári regrets the most is the impact that the debate had on the art community. At first she found the backlash by mostly white academics (as documented in Grey Areas) against Enwezor’s comments to be “overly anxious and neurotic” as they fought the notion that they were inherently racist. Vári believes that this level of neurosis became internalised and led to a form of self-censorship.
“Sadly I think art practice in South Africa responded by becoming much more careful and it resulted in swathes of politically correct art that I just found anodyne.
“It hamstrung certain enquiries that were under way and that could have developed into something much more sophisticated and interesting.”

The status quo of this debate will be the focus of an issue of the Critical Arts journal, which is edited by Leora Faber, an artist and academic who heads the Research Centre for Visual Identities in Art and Design at the University of Johannesburg. In her editorial Faber also notes the shifts in art practice that the representation debate had.
“These debates could, arguably, be said to have led to a position where, over the past decade, certain artists (such as Berni Searle, Tracey Rose, Minnette Vári, Senzeni Marasela, Claudette Schreuders, Jean Brundrit, Penny Siopis and Steven Cohen, to name but a few), have turned to the use of their own bodies as subject, and towards the articulation of more personal concerns, perhaps feeling that it was more comfortable to image and ‘speak for’ themselves.”

While Faber seems to be of the opinion that this shift did in fact lead to a rich discourse that allowed the personal to articulate broader political stances, she also has observed that a new generation of artists such as Lawrence Lemaoana, Athi-Patra Ruga and Mary Sibande have found new ways to engage with issues of representation in a manner that exudes “playfulness, humour or ‘fun’; it is almost as if the weight of the Grey Areas debate has been lifted from this generation, allowing for a new sense of artistic freedom, which is being realised through critical use of play.”

Of course, one could argue that Breitz and Vári’s contentious works were also playful in nature, as they, too, are tongue-in-cheek engagements with racial identity. Perhaps it was the politically fraught climate when the works were conceived that shaped their reception. On the day of In Context’s large public opening, Malcolm Purkey, artistic director at the Market Theatre, studied Breitz’s Ghost series closely. “How could these works
have been contentious?” he roared with laughter. – published in The Sunday Independent, June 20, 2010
Posted by Mary Corrigall at 2:05 AM