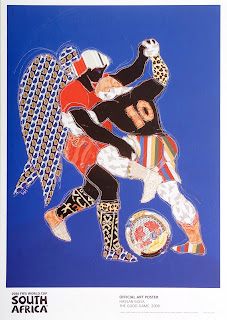 Did anyone read that extract of Gavin Sourgen’s (has anyone heard of him?) essay from the book “Sport versus Art” that was reprinted in the M & G a couple of Fridays ago? The inaccuracies in Sourgen’s essay have really been bugging me; he clearly isn’t really that au fait with the art world or the South African cultural scene. For your amusement and to exorcise some of my annoyance with his illogical and uninformed observations I will share with you some of his flawed 'insights':

Sourgen presents a dichtomised view of the local cultural landscape suggesting that on one end of the spectrum lies the “indelicate and profitable creations that draw on a cache of trite, imperceptive assertions about poverty, race relations and other such social discrepancies”. At the other end of the field are “those more intelligent and penetrating works that are relegated to the shadowy corners of unknown theatres, galleries and bookstores for their unwillingness to concede to the pressures of cultural cliché.” Hardly a nuanced or accurate reading; from this perspective products which engage with race relations and other social discrepancies can only ever be trite and commercial. This is simply untrue. What about John Kani’s Nothing but the Truth, Craig Higginson’s Dream of the Dog (now showing at the West End) or the art of David Goldblatt, Santu Mofokeng, and Michael McGarry?  Aside from the fact that trite schlock rarely engages with issues pertaining to race relations I wonder given that musicals are the most popular form of theatre in the UK and the US whether the same framework applies to the cultural landscape in those respective countries? But I think where he really displays his ignorance is when he states that one has to “ferret through the small print of an independent newspaper to locate the latest Kentridge exhibition in a mysterious region of the urban hinterland.”
Before I address this ridiculous remark about Kentridge; I have to ask; what is an independent newspaper? Is it one that is not aligned to any print monopoly – not even the neighbourhood knock n’ drop papers are “independent” – perhaps he means the SA Art Times but even that paper is aligned with its overseas parent, the Art Times, as the M & G is with Guardian newspapers and The Sunday Independent, which is anything but independent; we are part of the global entity called Independent News & Media Group, which is (mostly) owned by the baked bean Irish kings, the O’Reillys. Or does he mean editorial independence? The chance of a small independent paper, which is even more heavily indebted to its patrons, asserting editorial independence is rare.
Besides Kentridge’s work has been written about extensively for years not only in The Sunday Independent-but-not-independent and The Star, The Times and Sunday Times but internationally, there have been articles on Kentridge in a number of mainstream papers too from the Washington Post to The Financial Times.
His claim that Kentridge exhibitions are shown in “mysterious regions of the hinterland” is also pretty absurd given that his work has in the last couple of decades mostly been shown in mainstream commercial galleries such as the Goodman in its Joburg and Cape Town galleries – the Joburg gallery is located in the heart of northern suburbia and not in some far flung “hinterland” either.  Kentridge’s opera, The Magic Flute, (which also engaged with matters pertaining to race) was staged in a mainstream commercial theatre too, the Joburg Theatre, formerly the Civic Theatre, which is usually home to “a cache of trite” work that Sourgen eschews.

In Sourgen’s polarised view the trite works centred on poverty and race are “so accessible that it cannot be measured as a work of art” while the more serious works of Kentridge’s ilk are conversely so “inaccessible” that they “reach the point of being impervious.”
Where does one begin? I didn’t realise that a work had to be inaccessible to be classified as “art” – where does this place the work of say Andy Warhol, Gavin Turk or Candice Breitz who all exploit common, universal visual vocabularies that anyone can access? If Sourgen finds Kentridge’s art so impenetrable, frankly he shouldn’t really be writing about the arts at all.

Sourgen argues that the arts shouldn’t necessarily be a social tool – I too am not a fan of the instrumentalisation of the arts - but it I don’t hold onto a modernist view of art as an independent form of expression either.

I also don’t see what the relationship exists between the arts having to labour “under a historical burden of having to adhere to a set of redundant formal and political precedents” and the lack of historical continuity in the sports, demonstrated by “attempts to remove traditional emblems.” Seeing as the Springboks actually retained their name and emblem I am not sure how it is that their historical character was erased? But even if this was the case, what has it got to do with the historical continuity that he perceives burdens artists? And this is the problem with books/exhibitions and the like that attempt to set up a dynamic between art and sport; the writers are left fumbling in the dark, trying to forge connections.

Sourgen’s essay hops all over the place until he finally concludes that it will be left up to the two “mediums”, namely art and sport, for the “full import of democracy to be realised.”
Do me a favour but sport is hardly an expressive “medium” that has the capacity to unpack or critically engage with notions of democracy. Besides isn’t what he is advocating here a call on artists to employ their art as a social and political weapon? Also he suggests that “theoretical or abstract” engagements are redundant to the process of  realising the “full import of democracy” – pray then, exactly how will artist’s contribute to this objective? Bollocks, it’s all bollocks.
Posted by Mary Corrigall at 9:55 AM