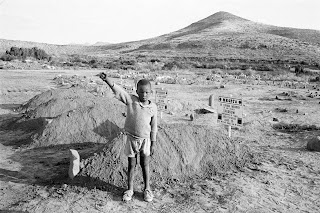 Recently a prominent academic and writer admonished South African cultural producers for their fixation with the land, implying that this obsession had become clichéd, dull and predictable. He accused artists of either projecting romanticised views on to the African landscape, rendering it as this earthy, barren and unoccupied space that tested the human spirit of endurance, or being confined to narratives that dwelt on the socio-political politics attached to land. Both pursuits could result only in tired, dour and unimaginative forms of expression, he said.

A Country Imagined, which is showing on SABC2 at 9pm on Sundays, focuses on exploring a myriad cultural products that feature or are inspired by the land, so it gives credence to the idea that our artists are preoccupied with this topic. Of course, this subject is not just confined to artistic circles; land reform or redistribution also remains a political hot potato.

But isn't a fixation with the land universal? In 2005 the BBC ran a similar series, A Picture of Britain, which explored the history of pictorial representations of the landscape. Commenting on the series, presenter David Dimbleby noted that "we don't just love landscape in Britain... it is part of our culture and we look at it in a particular way because we have been led to do so by artists".

Dimbleby's observation goes straight to the heart of the importance of such a study, particularly one accessible to a large TV audience, it allows us to see the ways in which our view of our country has been shaped by representations of it. Of course, those who have spent any time studying representations of the African landscape executed during the colonial era will know how influential these portrayals were in perpetuating or justifying the political imperatives of the day. With respected art historian Tracy Murinik behind A Country Imagined, no doubt these issues will come into focus as the series progresses. But it would also be interesting to learn how today's art is propelled by our new political dispensation. This South African series isn't a carbon copy of A Picture of Britain; while it, too, has a non-expert in the form of Johnny Clegg presenting, it hasn't confined its study to rural destinations as the BBC series (and accompanying Tate exhibition) did. It has also embraced urban destinations, which is just as well considering the gazillion artworks and writings on Joburg.

This series also departs from the British one in that the producers have included literary works and other - what they term in the series "outsider" (meaning uneducated and self-taught) - artists' ponderings on the landscape. The "outsider" title feels a bit uncomfortable - who is defining what exists inside or outside the norm? - but the unconventional forms of expression featured, which include dance and performance, mean that the series gives quite a rounded view of each area, province or city that forms the focus.

In an episode on the Karoo there is a wonderful scene where locals do a traditional dance that involves kicking up the sand. It's a literal engagement with the land but conforms in a way to a painter's desire to exert control over it.

The discrepancies between the different forms of expression are a sort of subtheme of the series. In the Karoo episode, Clegg discusses the different imaginings of Die Hel that emerge from Andre Brink's novel Devil's Valley (1998) and David Goldblatt's 1960 photographs of a family living in this isolated and unforgiving terrain. (As you can imagine there are lots of Goldblatt photos in this series including the one above I think). Naturally, Brink's medium allows for a level of artistic licence not afforded to Goldblatt, who is tightly bound to reality with his camera. In his writing Brink is able to project an exaggerated view of a dysfunctional society.

In contrast to these two images of Die Hel is Clegg, who plods around the area on foot while reconciling the images presented by Goldblatt and Brink with the actual place. But the truth is that the footage of Clegg is no more or less an artistic representation of Die Hel than that which either Goldblatt or Brink offer, for he, too, is starring in another representation - a filmic one.

The directors and cinematographers on this series were not immune to the seductive visual and emotional pull of the land, as there is no sense that they have set out purely to document the "real" landscape: each shot of the Karoo episode is artfully composed to enhance its natural beauty .

This is an outstanding series, even with Clegg, who is an outdated character on our cultural landscape.Most importantly, what A Country Imagined shows is that there is no single view of the country and that any declarations about representations of the South African landscape are never more than generalisations.

This series offers a nuanced view into this leitmotif in South African cultural expression, making clear that while each person's perception may be coloured by the times and/or political climate in which they live, each of their representations is moulded by their own idiosyncratic world view. In this way we each inhabit our own imagined country. - published in The Sunday Independent, April 25, 2010
Posted by Mary Corrigall at 9:37 AM