In Context: Kentridge at JAG 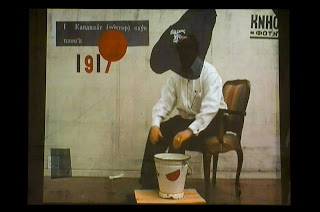 I know that it has become totally uncouth to enjoy a Kentridge exhibition. But from the moment I stepped into the centre of this exhibition of eight projections, which covered every wall of one room at JAG I was swept up by the imagery. Here is my review:

It seems fitting that artist William Kentridge has become transfixed with Nikolai Gogal's short story, The Nose (1837), a narrative centred on a man whose nose detaches from his face and goes on to lead a more successful existence than its owner. On some level, this metaphoric tale echoes the manner in which Kentridge's artworks and reputation have taken on a life of their own in the wake of his international success.
Kentridge has achieved a level of recognition where the value attached to his art is no longer always determined by the work itself but its association with him. This level of success places him and his work in an ambiguous position within the local art world - although he is revered many look upon his work, his persona, with cynicism. Feeding this contradictory response are efforts by local gallerists to display and celebrate almost any items which have passed through Kentridge's studio or are connected with his talent - an exhibition of dated theatre posters by Kentridge at the now-defunct Warren Siebrits Gallery comes to mind. This is not unusual; it's part of a well-established practice of canonising artistic genius. Thus in many respects within the realm of the media, art history, Kentridge is transforming into someone he has no control over. This idea resonates with the title of his exhibition I am not me, the horse is not mine, an absurd statement alluding to an implausible denial of selfhood. It is not a new work; it was first staged at the Sydney Biennale in 2008 and, like much of his recent artistic output, emerged during the preparation for his production of Dimitri Shostakovich's The Nose, which was shown to great acclaim at New York's Metropolitan Opera this year. This artwork/installation consists of eight projections that are interre-lated and play simultaneously, parading collaged animations and real-life footage relating to Russia's Stalinist era, the visual iconography associated with that period, and amusing drawings relating to the unruly Nose. The eight screens are placed side by side around a room, bombarding one with a cacophony of imagery that is at once confusing and exciting.

Like the nose in Gogal's story, which has legs of its own, this work too has value independent of the opera production. Its worth isn't necessarily based on Kentridge's burgeoning fame either - albeit that it is tricky to isolate his persona from his work. Their importance lies in the manner in which it acutely articulates our current political quagmire as well as local artists' inability or struggle to identify a new vocabulary that addresses/expresses post-apartheid conditions. Kentridge establishes these concepts by summoning the visual iconography of Russian Constructivism, a post-revolutionary language, a sort of East-bloc derivitive of modernism that was designed to serve the needs of an emerging nation with a new political dispensation.

Kentridge weaves dated footage from Joseph Stalin's era with stylised animations representing the period into eight projections, such as a procession of disfigured bodies emerging in the aftermath of a violent battle. One of them carries a small model of Vladimir Tatlin's Monument to the Third International, a design for a tower intended to house scientists and revolutionists who would develop propaganda for the socialist movement. Tatlin had envisioned mounting a projector on the top of the tower that would project propaganda films onto the underside of the clouds. It was a time when artistic creativity was galvanised by the vigour and optimism that a new political authority promised. It reminds one of the early days of the Rainbow Nation, when political rhetoric was taken at face value and the euphoria of democracy overshadowed anxiety about the future.

Extracts from Nikolai Bukharin's infamous plenum of the Central Committee in 1937 on one of the screens, however, reveals the duplicity inherent in Stalin's rule but also Bukharin's resistance to be accountable for his actions. Lack of accountability is alluded to in the title of the installation which is a statement taken from Bukharin's trial in which a peasant apparently "attempted to deny responsibility".

All of these events echo our current political landscape in more ways than one - not only in the manner in which our leaders are not held accountable for their actions - but also in Kentridge's allusions to the corrupt nature of the political ideology which underpinned our own revolution. Within this context Gogal's "nose" could be seen as an offshoot of a political ideology which, transplanted elsewhere, configures into something else suited for new conditions.

Apparently, Kentridge intended to celebrate "the creative energies unleashed by the Russian revolution". They also served as an "elegy for the crushing utopian hopes held by artists of that time". One can't help but think that Kentridge's lament for this loss is grounded in his own struggle to identify a language that articulates post-revolutionary or post-apartheid conditions or mindset. Paradoxically, the manner in which he parodies communist iconography implies a recognition that new visual vocabularies tethered to political contexts are just extensions of the ideological facades employed to justify violence and corruption. - published in The Sunday Independent, May 23, 2010.
Posted by Mary Corrigall at 12:47 AM