A Dumile Feni in the loo 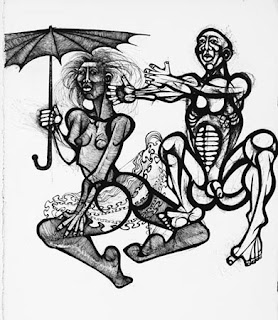 They weren’t serving plonk at the Standard Bank’s recent shindig for the launch of their new catalogue documenting the bank’s art collection – edited by Julie Charlton in between raising funds for the new Wits Art Gallery (she told me in the lift that it would be ready in a year’s time!). It was a good chat fest too: I cornered Nicholas Hlobo and quizzed him about his up-and-coming show at Brodie/Stevenson. After hearing that he was doing “paintings” I had to ask him whether he was just churning out commercial work in a format that would cheer conservative buyers. He told me he was pushing himself in a new direction. I remained sceptical (until I saw his work last week). But the most interesting discovery of the night was the artworks from the Standard Bank collection that were displayed in the loos. The event was held in an executive lounge so valuable works festooned every corner of the corporate setting – Kentridges, Hodgins, Pierneefs, an Oltmann – but I hadn’t quite expected to encounter art in the powder room. In the ladies was a Maud Sumner Self Portrait and apparently in the men’s was a Dumile Feni – not sure which; the Bank owns four of his works. It was with some degree of shock and surprise that a Pretoria curator discovered the Feni – “How could they put a Feni in the loo?” he declared, before taking a long sip of his Johnny Walker (the Bank had a full-bar on offer for the occasion). Certainly the Standard Bank Gallery have too much art on their hands if they are forced to display some of it in such inauspicious settings. Perhaps it would make sense to display art on the inside of toilet stalls, so that you could admire the work while sitting on the bog. But displayed in the more public areas of a washroom the art functions as decoration; it’s like a fresh vase of flowers.
Posted by Mary Corrigall at 12:12 AM

And a Maud Sumner in the ladies!