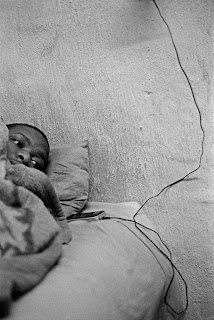 At a recent colloquium held at Rhodes University, writer and academic, Ashraf Jamal admonished South African artists for their dour palettes and monochromatic art works. In his view the absence of bold colour in the South African art canon is a manifestation of a state of mind that pervades South African art (and literature), in which moral seriousness overrides a playful form of expression, which he likened to a kind of "wakefulness". Jamal suggested such choices are not stylistically determined but are ideologically and culturally motivated, reflecting a vexed and existentialist relationship with the South African landscape and society.

Within this context it appears as if Sabelo Mlangeni is continuing this legacy with this latest photographic exhibition which presents two bodies of work in a monochromatic palette. He too seems caught within this staid artistic tradition that Jamal believes suffocates imaginative engagement with the present.

Without a doubt Mlangeni's art is propelled by a degree of moral seriousness; while one body of work documents visits to his hometown, Driefontein near Wakkerstroom in Mpumalanga, articulating this fixation with place that Jamal lambastes, the other features the poor living conditions at a men's hostel on the East Rand. One can suppose that Mlangeni's documentary mode of expression motivated his decision to shoot in black and white (or perhaps he drained the images of colour in Photoshop afterwards): this stark, no-nonsense palette is the language of the objective documenter. Colour, which is aligned with emotional responses, introduces subjectivity into the art making.

Read more »
Posted by Mary Corrigall at 1:14 AM No comments: 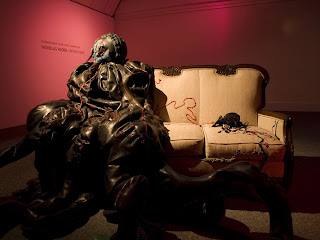 Read more »
Posted by Mary Corrigall at 1:34 AM No comments:

While William Kentridge was being feted by New York society – apparently he has become a fixture on the New York dinner party circuit – on the other side of the globe in a small South African village (Grahamstown) where a group of artists, writers and academics had gathered for a colloquium on Colour, writer and academic Ashraf Jamal was questioning and challenging Kentridge’s status in the canon of South African art. Not that this is unprecedented; within South African art circles I have noted a growing weariness around Kentridge’s art  propelled by overexposure and hype around his work.  I will always prize his charcoal animations but I have come to view his recent  appropriation of dated visual modes – such as the stereoscopic drawings or the Russian constructivist vocabulary – as gimmicks employed to amuse and create the illusion that his art is constantly evolving - which it is and it isn’t.
Singling out the work of Kentridge and Cecil Skotnes Jamal articulated concern with the absence of colour in these artists work which he views as a manifestation of a state of mind that pervades South African art, in which moral seriousness overrides a playful form of expression, which he likened to a kind of “wakefulness” (drawn from a Foucault quote). Interestingly, it is noted in an article about Kentridge which recently appeared in the Financial Times that he chose not to use paint as his medium of expression because it would involve using colour. So really Kentridge is as colour-shy as Jamal proposes. Jamal suggested that such choices are not stylistically determined but are ideologically motivated to reflect a well-trodden discourse in South African culture that is centred on reconciling the self with the African landscape and culture – a continuing crisis centred on the ‘politics of place’. He proposed that the muted, earthy palette that characterises Skotnes’ art was evidence of his romanticised notion of the African landscape as an arid, dry and harsh terrain where survival would be tough.   In contrast he argued that Kentridge’s art, which features mines and the Joburg landscape, was evidence of an existentialist crisis fuelled by the artist’s battle to locate himself within a highly contested and politicised territory.

Read more »
Posted by Mary Corrigall at 11:50 PM No comments: 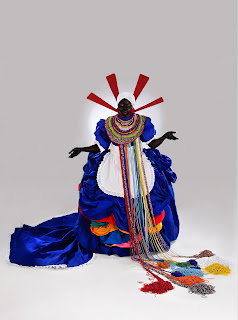 Read more »
Posted by Mary Corrigall at 12:27 AM No comments: