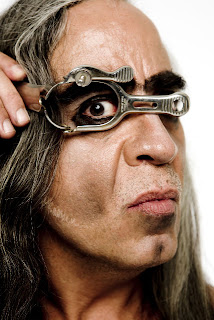 What's the difference between a performance artist and a madman? It was a rhetorical question posed by none other than Guillermo Gómez-Peña, the renowned Mexican born-San Francisco-based performance artist, to a small audience gathered inside UCT's appropriately titled Little Theatre.

"The difference is, is that the performance artist has an audience," answered Gómez-Peña. His punchline was met with roars of laughter from an audience mostly made up of delegates from Pre-Post-Per-Form, a colloquium hosted by the Gordon Institute for Performing and Creative Arts (GIPCA) at UCT, which was designed to survey performance art in South Africa and give artists, curators, choreographers and writers insight into the different ways in which interdisciplinary works are manifesting in different realms of the arts.

Gómez-Peña's performance was one of the most awaited events of the colloquium. Some members of the audience, who associate performance art with physical movement, might have been surprised by his static performance, which played out behind a lectern. The performance art jokes kept coming.
"How many performance artists does it take to change a light-bulb?" piped Gómez-Peña.
"No one knows because no one stayed around long enough to see," he exclaimed. Though it might have sounded like a betrayal by poking fun at performance art Gómez-Peña performed the ultimate anarchistic act. His comedy routine was also a self-reflexive study of performance art that addressed the central query that plagues performance art: How does one define an art form whose most prominent characteristic has been the absence of any fixed character?

Gómez-Peña revealed his musings on the topic when he recollected a conversation he had with a nurse in which he tried to explain to her what it was that he did for a living. He told the nurse that it was an activity that imparted ideas. But ultimately it was his unconventional performance itself which gave audiences insight into how he is constantly renegotiating and redefining his notions of performance art.

What he delivered was a hybrid performance, which combined stand-up comedy, beat poetry, political posturing and theatre. In this way he conformed to the manner in which US performance artists have sought to break the boundaries between art and life. Gómez-Peña attempted to break down the barrier between performance and reality by conjuring brands of performance that play out in reality, such as a political speechmaking or a comedy routine. He further achieved this objective by describing some of the more extreme physical experiences he has undergone in life, such as a colonoscopy, as the ultimate performance art act.

So while his performance appeared to echo conventional activities embedded within his expression were key performance art strategies. The humorous tone of his performance probably put the audience at ease, but even his stand-up comedy was confrontational in nature, often pushing the performance past the boundaries of social convention by asking inappropriate questions such as: "when last did you have sex with an illegal alien?"

Ultimately, Gómez-Peña stretched South Africans' notions of what constitutes performance art in the sense that language was his mode of expression, rather than visuals or physical performance.

He employed or mimicked rhetoric drawn from a number of conventional modes of performance, such as stand-up comedy and political speech-making which are inherently open to manipulation and anarchy.

Mamela Nyamza's performance entitled Hatched, which saw the Cape Town-based artist being consumed and swallowed-up by a dress attached to a washing line, referenced local concerns: such as the manner in which appearance and the identities that they denote subsume individuality. Nyamza's performance initially started out with her hanging clothes on the washing line - an ordinary activity. Thus, her work moved between the sublime and the mundane, the poetic and the everyday in much the same way as Gómez-Peña’s performance.

Jay Pather, the convener of the colloquium and regarded as one of the country's foremost interdisciplinary creatives, however, expressed apprehension about the aestheticising of history - in other words turning real life events into grand visual spectacles. He seemed to imply that the spectacle itself became the main point of interest, a vacuous facade that demarcates the boundaries between life and art.

He also articulated concern with the "seamlessness" of hybrid works: that the friction or messy edges between the diverse vocabularies he has been employing had become undetectable. Pather seemed to suggest that this actuality underplayed the complexities of these works which he believes multiple languages are designed to articulate. Clearly Pather uses multiple forms of expression to not only create dynamic work but to articulate the dynamic and multilayered nature of our political and social landscape.

Bettina Malcolmness's performance art hails from the other end of the spectrum in that her performances are so discreet that they go without notice. She suggested that she sets up her performances "to fail". Malcomness explained that she achieved this objective, or non-objective, by staging performances or interventions that were so embedded in real life events or staged without any promotion that no one was aware that they were taking place.

Vis-à-vis performance art, Malcomness equates failure with non-participation or acknowledgement from the audience. So interestingly, her performance art succeeds if it does not pique the audience's attention. Of course, this suggests that Malcomness's brand of performance art does not require an audience at all; it's a solipsistic kind of art that is made for the artist's benefit only. In this way while Malcomness's performance takes place in the public domain and in full view of the public, and while it often contains quite ordinary acts, such as cooking boerewors, it remains an elitist practice.  – published in The Sunday Independent, February 28, 2010

•  Mary Corrigall presented a talk at Post-Pre-Per-Form entitled Mapping Shifting Fields: Exploring the Modes and Tools of Critical Analysis for Interdisciplinary and Performance Art
Posted by Mary Corrigall at 12:45 AM