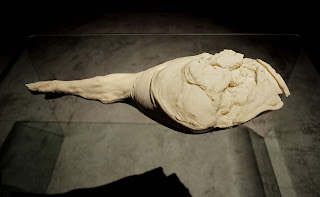 On the day I entered the Brodie/Stevenson gallery to view Michael MacGarry’s exhibition I wasn’t in the mood to view art. I had terrible sinus, had been working straight for eight days and really just wanted to cower under a duvet. I was blown away. MacGarry’s work was just the injection I needed to wake me up from my mental and physical slumber. I know it is probably too early to say but I have a feeling that this will be one of the hottest exhibitions I will see this year – unless MacGarry happens to top it with his Standard Bank Young Artist exhibition at the National Arts Festival. My review, which will follow, only concentrates on two works at the exhibition but there were other artworks that could have been just as satisfying to write about. People always talk about the artist’s artist; I think MacGarry could be the art critic’s artist; for the simple fact that when an art critic views his work their fingers start itching to hit the keys on their laptop.

THERE were high expectations for this exhibition: having scooped the prestigious Standard Bank Young Artist Award towards the close of last year all eyes would be on Michael MacGarry’s next solo exhibition.
Awards aren’t always reliable markers of brilliance and they have been known to induce a state of creative paralysis. MacGarry certainly doesn’t appear to be a victim of the latter; this new solo exhibition presents some of his strongest work to date, demonstrating that this artist is only just getting into his stride. So often contemporary art tends to engage with abstract or metaphysical subject-matter or takes art itself as subject, cutting the man in the street out of its insular conversations, and while MacGarry’s exhibition could hardly be described as “accessible” the themes that it addresses are tangible and pertinent to our society. There is nothing ambiguous about this exhibition from its bold, straightforward title, placed in upper-case for maximum effect, THIS IS YOUR WORLD IN WHICH WE GROW, AND WE WILL GROW TO HATE YOU, to its conceptual underpinnings, which are centred on the economic policies on the continent. If one had to sum up his concerns in a single word it would be “neo-colonialism”. In other words he is addressing the manner in which Africans are being exploited by their own governments and Western and Eastern (Chinese) authorities.


This isn’t a new theme in MacGarry’s work; one of his seminal artworks, The Master, from his African Archetypes series, directly articulated the manner in which African leaders have facilitated China’s economic colonisation of the continent. In this exhibition the focus is on the manner in which African governments have paved the way for natural resources to be plundered, enriching the pockets of Western corporations. MacGarry doesn’t have a passing interest in this topic: the lengthy and detailed texts that accompany each artwork are evidence that his commentary isn’t based on glib insights gleaned from newspapers (as so many artists are wont to do) but from in-depth research. Obviously this adds weight to the exhibition but beyond that it shows that he grasps the inner mechanics of his subject-matter, which has a huge impact on how successfully he translates economic realities into visual products.

Dating back to his All Theory No Practice approach to art-making in which he produced texts that described the conceptual thrust of imaginary artworks, MacGarry has always had a penchant for verbalising the concepts that drive his work. This inclination could have presented a risk in the sense that it would have facilitated a kind of conceptualist art practice in which the art objects would simply be an adjunct to the ideas or literal translations of ideas. Fortunately, neither is the case here. In fact, what is most invigorating about this exhibition is the manner in which he has exploited the mechanics of objects and circuits of commodity-exchange within visual culture to articulate the theme. For example, in a work titled Mercantile Capitalism MacGarry doesn’t show how cheap objects are sold for inflated prices, rather he presents a bronzed head of a decomposed pig.

The title and the object appear to be incongruent but this object references this economic principle in two ways. Firstly, this economic theory is pertinent to the sale of art objects; particularly in the context of contemporary art where often the price of the product bears no relation to the value of the materials used to fashion the art product (like a tin can) nor are there hours of workmanship that must be accounted for in the price. Of course, in the context of this piece, the bronzing process is costly. But what is most significant here is that the artist has taken a natural product and endowed it with “life” beyond its natural life-span. The dead pig lives for eternity, allowing the artist, gallery or patron to continue profiting from this natural being long after it has ceased to exist. MacGarry has placed artificial eyes into the pig’s head, which creates the illusion that the pig is still alive, has an awareness of its fate. It is a manufactured sense of  consciousness that MacGarry brings forth and one that articulates the way victims and perpetrators of this form of postcolonial exploitation are present but absent; present in that they allow this corruption to continue unabated and absent in the sense that they either are ignorant or choose ignorance in the case of the African leaders who are perpetuating patterns of corruption set by their former colonial powers. The head is quite grotesque as  it is transfixing, bringing into focus the manner in which these old patterns of exploitation are as seductive as they are unpalatable, aberrant. The interplay between these sentiments also infuses one of the most striking pieces of this exhibition, which is a disembodied leg of an animal that has been fashioned from white chocolate. The disembodied body parts at this exhibition obviously speak of natural organs that have been cut off from their ‘source’.

The title of this work is African National Congress (2010) and is accompanied by excerpts from Moeletsi Mbeki’s 2009 book, Architects of Poverty: Why Africa’s Capitalism needs Changing, which outline the manner in which the ruling party has adopted policies set by the former apartheid government and has chosen to push prices for natural resources as high as possible so as to benefit the state and maintain a large population of unemployed citizens. Just as this chocolate sculpture is visually repellent – albeit that with your eyes closed it would taste heavenly – the reality of the ANC’s current economic policy is ugly, although the benefits to a small group in the upper echelons of government are “sweet”.

But, of course, as white chocolate isn’t made from cacao, just butter and sugar, the sweetness and flavour is synthetic, as artificial as the leg itself. So here, while MacGarry hasn’t employed a natural entity in the making of his artwork , he has recreated an object that mimics one. In other words he suggests that the current economic market is an artificial system that creates the illusion of wealth, independence and sufficiency. This is an outstanding exhibition that not only reflects thoughtfully on African politics but one that creates some haunting visual statements.- published in The Sunday Independent, March 7.
Posted by Mary Corrigall at 6:34 AM