The Beast at Home: Bonita Alice at AOP 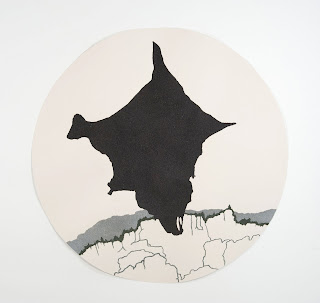 IT IS easy to spot the "beast" referred to in the title of Bonita Alice's new exhibition. In all of her circular artworks a dark black amorphous mass dominates. Though it is a solid mass with defined borders it is like a shape shifter as it morphs into different configurations. Thus it is an unpredictable and ever-changing phenomenon that eludes description and can never be fully apprehended. This menacing black beast is always pictured in relationship to a land mass, a territory: in one image it is pictured between what appears to be a cliff. In another it is curled into a tight ball, with protrusions like limbs extended into the air as it is seen hurtling towards land.

Like the depiction of the black beast, the land or territories that appear in each image are clean stylised renderings. These territories are defined by jagged edges, underpinning their uneven borders and the manner in which they subtly infiltrate space. In some instances these shapes are colonised by irregular lines, denoting rivers or territorial borders.

So it is that Alice's artworks appear like maps. No ordinary maps as they chart the confluence of physical territory and internal processes. The land masses obviously referring to physical landscapes and the black beast articulating an internal phenomenon, an ambiguous emotional and psychological entity that hovers at the fringes of the consciousness, haunting the mind, the soul.In this way Alice gives expression to the manner in which the inner consciousness and external, physical phenomena interact and collide. The tension and dynamics between the two. Most importantly, she points to the ways in which physical or geographical connections manifest internally.
In other words, how one's affiliation to a place conjures an indescribable and almost irrational psychological condition. Certainly at work here is the artist's relationship to Joburg. The negative connotations attached to the city complicates people's attachment to it; hence writers, filmmakers, photographers and artists are constantly grappling to reconcile their affiliation, make peace with the push-pull dynamic.

Alice, who immigrated to the UK in 2007, is also forced to resolve her position with a place she is far removed from. Thus the black beast that features in her artworks could also operate as a metaphor for a destination which is no longer physically accessible. In this context Joburg has become an internal, psychological territory and, because in this realm it has no physical presence or any definite physical characteristics, it is subject to constant reinterpretation. In other words, Alice is constantly engaged in constructing and reconstructing Joburg in her mind. It is not just an intellectual process but, given that her attachment is emotional, these reconstructions are governed by unpredictable emotions that move back and forth like waves on a beach as Alice presumably detaches herself from Joburg and then, in other moments, realises that the attachment to her place of birth cannot be fully severed or understood.

That these black beasts are constructed from wool dust sourced from felt factories in Joburg substantiates the idea that this dark, amorphous mass is rooted in a physical place, albeit that it takes shape in the imagination. It is both abstract and real.

Dust is such a wonderful medium for her expression because it demonstrates how places leave a physical (and emotional) residue. Dust is unperceivable until it is swept up into a mass. In Alice's work she does just that by gluing dust particles together. Her art, therefore, becomes a way of making sense of the residue that Joburg has left on her but, also by amalgamating the residue, she shows how the debris accumulates over time, forcing an individual to confront their connection.

In writing about her work Wilhelm van Rensburg creates a link between Alice's art and the abstract expressionist movement. However, while Alice employs abstract forms to give expression to an inner psychological state, she does so in a very controlled manner, which suggests her process is mediated by the intellect at all times. The painstaking process entailed in gluing the dust denied a spontaneous psychological response. Though it must have compelled a meditative state, the heavy stylisation, said to be drawn from Japanese illustration, speaks of quite a clinical approach designed to suppress, control and contain emotional responses.

So while Alice appears to be confronting this psychological (and physical) demon that haunts her, part of the process involves finding ways to distance herself from it and learning how to master the influence it has over her. Rendering this phenomenon in a decorative illustrative mode achieves both. Alice's work is unusual and her approach to unpacking and negotiating the complex dynamics attached to places and one such as Joburg, which comes with all sorts of baggage, is refreshing. - published in The Sunday Independent, March 21, 2010.
Posted by Mary Corrigall at 12:19 AM