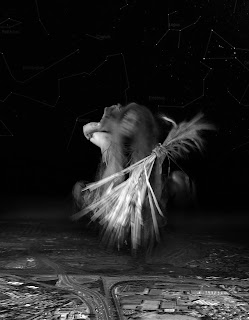 One expects works at a solo exhibition to be part of a focused dialogue but with Parallax the works share a deeper relationship: most of the artworks extend the discourse into unexpected territory or echo one another in such a way that Vári's viewpoint feels well-rounded and solid. This characteristic ties in neatly with the exhibition's main thrust: the shifts in nature and its relationship to humanity and culture, which, through myth, superstition and fantasy gives expression to this complex connection.

Certainly, in a few works there exists an obvious visual synthesis such as between Totem, a digital video artwork, and the series of photographs entitled Dog Star Night. It is the dark silhouette of trees against a fluctuating night sky that forms the central motif in both works. In Totem, the trees are obviously animated and sway and rustle.
In-between these prosaic natural growths is a mutating being that at times appears anthropomorphic and at others simply mirrors the shape of the trees - it vacillates between being different and the same. In this way it moves from signifying a human to an object of human superstition to a natural entity. This object/subject is the totem. In so-called primitive societies the totem generally represented a community of people, thus in a metaphorical sense it should have dynamic, shifting persona.

This is a dry description of this work that doesn't do justice to the fact that it is sensually compelling - a vital aspect . It is the music or rhythmic sounds that Vári has selected - sighs of pleasure - that imply that this confluence between human and nature provides a transcendental experience, allowing humankind to imagine an unseen world or order that makes sense of reality.

There is a strong element of fantasy in this work. In contemporary culture perhaps it is through the mode of fantasy that we are best able to access or come to terms with nature (think of Avatar). In Vári 's Vault Series for example, Mother Nature is represented as an ethnic diviner whose different states of being represent different seasons, different solstices, such as Solstice South, Equinox North, which are the titles of each work. Here, as with Totem, Vári summons elements from shamanistic practices, rituals that exploit and speak of the interconnectedness of nature and humanity.

In Vári 's art they also function as a visual motif, a expedient shorthand to give expression to an unseen natural force. Because the shaman pictured in Vault Series - a series of photographs of someone dressed up as a diviner - is a larger-than-life persona that hovers over an urban sprawl, there is a sense that she is more than an intermediary between the human and spiritual, natural world but in fact represents the force that governs this otherworldly dimension.

In one image this shamanistic diviner looks up to the dark black skies above her where starry constellations are mapped with broken lines; in this context she is the link between earthly and celestial worlds but also embodies the human observer. Suspended between maps of the sky and an urban destination she is gripped by this hunger to control and understand the universe. But the worlds she inhabits and perceives are constructed. The interconnectedness of these realms is also referenced in the Dog Star series. The reason Vári has selected trees as a central motif is that their spindly limbs stretch out towards the heavens, they are like totems or church spires that are designed to initiate a dialogue between the earth and the heavens.

Parallax, a video artwork, sees the apotheosis of this confluence between this mystical spiritual dimension and the urban contemporary world as Vári overlays imagery derived from both realms. They are not competing worlds, they co-exist. One has the sense, especially in the context of her previous exhibition, that as the urban environment fluctuates and mutates and is subject to the forces of nature, it is to some degree an organic being, too. This is a fascinating and challenging exhibition. Vári draws heavily from myths and fables, so one is often left with a sense that unless you are completely au fait with the dated iconography you are missing out on another layer of information that provides further insight into the nature/culture dialectic.

The press release implied that there was a gendered slant to the exhibition, suggesting that the work referenced women's shifting position in society. That topic is very discreetly embedded in the work, certainly an ink drawing of a naked woman standing on a spinning wheel in The Discovery of Writing implies a female creator or narrator who one supposes weaves the stories represented in the Wisdom of Impious series, subtitled Spun, Flown and Strewn, three anamorphic ink drawings that can only be viewed from an angle. Observed straight on, the distorted effigies of people appear like landscapes, allowing the human form to collapse into a depiction of the natural world. - published in The Sunday Independent, 7 February, 2010
Posted by Mary Corrigall at 10:21 PM