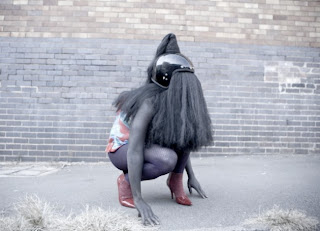 I have been preparing (writing) for a talk at UCT which I will be giving on Saturday at a colloquim on Performance Art, called Pre-Post-Per-Form - its a bit of a tongue twister. It is hosted by the Gipca (Gordon Institute for performing and Creative Arts). The title of my talk is Mapping Shifting Fields: Exploring the modes and tools of critical analysis for interdisciplinary and performance art. Some of my focus will be on the work of Lerato Shadi, which I have written about recently but I also discuss a host of other artists who use performance or performative aspects in their art.

Here is the press blurb/whatsit:

Sandwiched between the public art festival Infecting the City and Design Indaba, this colloquium on interdisciplinary performance and performance art is a talk/think/do tank of artists, academics, festival directors and curators, journalists and writers.

Investigating the act of recording the ephemeral moment of performance will be art commentators Sean O’Toole, Mary Corrigall and photographer, John Hodgkiss. Tanner Methvin of Africa Centre, (producer of Pan African Space Station, Spier Contemporary and Infecting the City) will speak on a panel ‘Soliciting and programming anarchy’ with festival and theatre directors and curators, Mboweni, Davies and Lara Foot Newton.

UCT Faculty, Mandla Mbothwe, Fritha Langerman, Jay Pather and Svea Josephy were all awarded GIPCA grants to develop interdisciplinary collaborations over the last year and they will contribute audio visual presentations of their work together with the collaborators that they worked who emerge from disciplines ranging from architecture to science.

For further information and registration details, email
prepostperform@gmail.com or visit www.gipca.uct.ac.za
Tickets are now on sale at computicket. http://www.computicket.com
Posted by Mary Corrigall at 8:17 AM