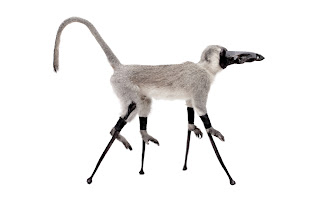 It is not often that a photograph of an animal in a rather uncomfortable position and with manmade accoutrements attached to its body gets me all excited but when it comes accompanied by a very comprehensive press release, written by Michael MacGarry, for his up and coming exhibition then I am gripped by a frisson of anticipation. The title of the exhibition does sound like a statement fashioned by an angst-ridden teenager eschewing the society he has been born into: THIS IS YOUR WORLD IN WHICH WE GROW, AND WE WILL GROW TO HATE YOU (must be in upper case for impact). One can almost see it spray-painted across a wall in a schoolyard. And in a sense MacGarry is rallying against a corrupt system or at least is once-again pondering the shady mechanics of political ascendancy. This is not modern-day protest art; based on the statements that Avant Car Guard made around resistance art in their last exhibition I don’t think MacGarry believes in the transformative function of art: art can question systems but not shift their impetus. I have to say that I agree with this viewpoint.  This rather chilling quote from Jean-Luc Godard, Weekend, 1967, which is included in MacGarry’s press release, articulates the lack of agency that the artist experiences and speaks of the only available route an artist can take:

"I said to myself, what is the good of talking to them?
If they buy knowledge, it is only to resell it.
They want cheap knowledge to sell at a profit.
They want nothing which would stand in the way of their victory.
They don't want to be oppressed, they want to oppress.
They don't want progress, they want to be first.
They will submit to anyone who promises them they can make the laws.
I wondered what I could say to them.
I decided it was that."

I like the fact that MacGarry writes his own press releases. God knows galleries aren’t known for issuing comprehensive or logical précis. More than often they cobble statements the artist has made into something resembling text, which doesn’t really make a whole lot of sense. Let’s face it lots of artists aren’t altogether articulate about their work or at least they often speak in riddles that they themselves have yet to unravel. Years of developing his All Theory No Practice, practice has meant that MacGarry has become an old-hand at writing about his work. But it is not as if his art is an adjunct to his writing; he doesn’t create these dry, banal-looking conceptualist artworks that are meaningless without an involved essay or have no visual impact.
That said his release does read a bit like an outline for a political science essay rather than an artwork; it’s all very factual (clearly the product of in depth research, facilitated by a certain Charles Skinner) and is laden with terms particular to that discipline.
For those who are too lazy to read the entire press release (it is longer than usual) in a snapshot this exhibition appears to be centred on how African governments have continued colonial policies in terms of exploiting natural resources for economic benefit that obviously only enriches a few. It looks as if MacGarry has looked at how this has manifested in other African countries before surveying this phenomenon in South Africa. It all sounds rather bleak and summons the mantra that white South Africans embrace as they pack their bags and head to Europe: South Africa is going in the same direction as the rest of Africa.
Of course, how MacGarry will translate this all into visuals will be the interesting part… it will open on February 18 at Brodie/Stevenson
Posted by Mary Corrigall at 1:26 AM