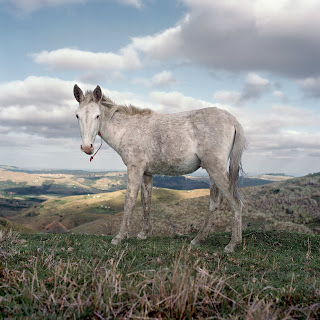 I have spent this week working on an abstract and talk to present at a colloquium centred on interdisciplinary and performance art, entitled Pre-Post-Per-Form, which has been instigated by Jay Pather, one of the most prominent interdisciplinary artist’s in the country (read more about it here). These are two fields which I have been writing about quite a bit recently. The challenges related to interdisciplinary work have mostly presented themselves in the context of works either pegged as dance or theatre, and such works I have often read as incursions across the borders of the visual arts or an appropriation of the vocabularies from this field.  It is such a stimulating and interesting topic, which is just as well given that I haven’t seen any good art this week.

Having missed the Sean Slemon exhibition at Brodie/Stevenson I made a quick pit-stop at the gallery to check out Daniel Naudé's exhibition with a view to reviewing the exhibition. I got there only to find that the exhibition only had a week left so I wouldn’t have time to get a review into the Sunday Indy. Nevertheless as I perused the work I felt quite relieved that I wouldn’t be writing about it; the work didn’t really call for a close examination. I don’t think Naudé is ready for a solo and in fact I think there is a tendency in this country to show young artists work long before they are producing ‘solo’ material. There were only one or two images of Naudé’s that I enjoyed and mostly it was because of the hyperreal quality they exuded. I think Naudé is at the beginning of a trajectory that has yet to be resolved or even explored in any real depth. What is also fairly off-putting is the fact that apparently the artist’s intention was to simply photograph animals on his farm. In other words he never set out to  create a body of work that engaged with or related to “an early 19th century folio (of) African scenery and animals by Samuel Daniell, who arrived in the Cape in December 1799 at the age of twenty-five, and was appointed as the secretary and draughtsman for an expedition to Bechuanaland”, as asserted in the bumpf the gallery has put out to frame his work. When I read this, I immediately thought of Andrew Putter’s African Hospitality series. Has Putter’s concepts been appropriated by the Stevenson Gallery crew so as to frame another artist’s work, so as it infuse it with a conceptual impetus that was absent from the start? This is precisely what some well-informed folk think.   I always thought it was the job of art critics to project their own ideas onto art? The question thus remains is Naudé’s art a vacuous piece of photography? Of course, every photograph can elicit a discourse of sorts, that is a given but does his work provide any new insights? I am not sure that photographs of cross-breed animals really says anything new about hybrid identities - except of course that their hybridity is not discernable. But then neither is my hybrid identity marked in my appearance. Hmmm…

I caught the opening of Peter Eastman’s show at Co Op in Braamfontein last night. It was the first time I have actually made it into this gallery: an artist/friend told me not to bother with the space, so I didn’t. The work wasn’t exactly new: a collection of black enamel portraits. I haven’t seen them in person before and found that photographic reproductions of them offer more visual information about his subjects – or maybe it was the light in the gallery or time of day that was muting some of its characteristics. Yes, I could see a reflection of myself in his portraits but I might have been more happy if they were just mirrors with frames. Perhaps I didn’t have enough wine (not that they had any), but I wanted the works to build on each other, I wanted some development. I didn’t want to just be presented with barely indistinguishable identical sets of black portraits. Yes, I know that this characteristic makes all kinds of comments about the portraiture genre but they didn’t turn me on, intellectually speaking. I don’t know. Black enamel portrait painting feels a bit gimmicky and the fact that he has been employing this technique for years screams stagnant one-trick pony artist. Naudé has a thing for mules, maybe he could do a portrait of Eastman. Ouch, that’s catty. I get bitchy when I get bored.
Posted by Mary Corrigall at 7:41 AM