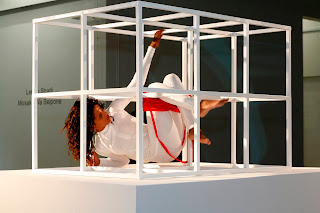 Blogs are like pets they need to be fed every so often to stay alive… so here is just a little titbit to keep it rolling. Last week was the opening of Lerato Shadi’s show, Mosako Wa Seipone ( of Mirrors) and it was a great start to the year  (my review will appear in the Sunday Indy this coming Sunday). So glad that the Goethe Institute have given Shadi the chance to do a solo exhibition – its unlikely that a commercial gallery would give her the space to create this kind of work (her 2007 Michael Stevenson show was in the side gallery). As Liza Essers pointed out to me during an informal chat there isn’t much of a market for video work here – granted she was referring to more filmic products but my guess would be that video performance works don’t exactly fly out of galleries. Sometimes I feel quite depressed about the fact that the art scene here is dominated/determined by commercial entities and that our public institutions play a fairly insignificant role in terms of determining what kind of art is being shown and how it is framed. The Joburg Art Fair is simply the apotheosis of this status quo. A state which might have seen the likes of Shadi pursue a career abroad – might still occur. We shouldn’t have to rely on foreign cultural institutions to support non-commercial endeavours - they have an agenda. Of course, every patron has an agenda: several artists have confided to me that the only visual arts projects that the NAC (National Art Council) funds are those with some kind of outreach spin-off or those that tie in with the prevailing political schema.

As I expressed in the latest issue of Art South Africa the Goethe on Main gallery has shown a slew of PC exhibitions that address some kind of socioeconomic issue, so it was refreshing to see a show that simply allowed Shadi to simply further develop her artistic trajectory. There was big turn-out too, everyone and their dog wanted to come have a look at Shadi’s drawn out live performances, Se Sa Feleng, which lasted three hours. It was gruelling work for Shadi, who had to navigate her body around a metal cube. When I spoke to her the next day she said she was exhausted and her body was covered bruises. She said she quite enjoyed the bruises though; they were a tangible residue of the performance, accentuating which parts of her body came into contact with the metal bars.