Marcus Neustetter: Observatory in the Making at Art On Paper 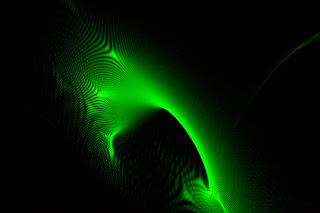 When viewing a Marcus Neustetter exhibition, it is always worth bearing in mind that he does not create art to be exhibited. What often goes on display are simply the products or by-products of performances or artistic and conceptual experiments driven by an ideological trajectory that he has been pursuing. As such, many will find that his latest exhibition is not terribly thrilling in a visual sense - well, except for the photographs that support or document his process, which are unusually alluring, given their practical function.

Photographs documenting Neustetter's journey to find the Northern Lights in Tromso, Norway, present evocative banal, barren snow-covered landscapes infused by an eerie tangerine light. But Neustetter is not concerned with the end-product of his physical and conceptual expeditions but the journey itself, the process.His journeys may be driven by a calculated set of ideas, but when he has arrived at his destination, Neustetter immerses himself in the experience at hand. In the drawings at the Vela Spila site (an archeological site in Croatia), Neustetter doesn't attempt figurative representations of the site; rather he undertakes making what appears to be meaningless markings on paper. They are more than a testament that he was there; they are evidence that he has engaged in the act of viewing. Drawing is used to simply heighten his awareness of the space he is inhabiting.

In his previous exhibitions, In Two Minds (2008) and One Moment (2009), he has used more contemporary hi-tech means to document experience: photography and map-making by tracing Google Earth images. Both modes of recording are able to map space and experience with some degree of precision, but, as Neustetter observed in these exhibitions, they offer only partial truths and representations which in no way summon the magnitude of an experience. Presumably in frustration, Neustetter abandoned the idea of retrieving faithful representations of experience and has resorted to a low-tech method: drawing, a tool which allows him to immediately describe an experience.

He is mesmerised by the sheer physical or visual magnificence of natural wonders, but it is also their intangible connection to human development or history that undoubtedly holds his fascination. With this exhibition his gaze shifts up, towards the sky, the stars and the grand phenomenon that occurs in this vast territory, such as the Aurora Borealis, the northern lights. But this complicates his project. Capturing constellations, or such natural light displays, is beyond Neustetter's reach. When he heads off to Norway to photograph the Aurora Borealis and his efforts are thwarted by inclement weather, which prevent the display from being viewed, he discovers that even the visual manifestations of nature are sometimes elusive.

What beats at the core of Neustetter's quests is the desire to in some way capture the intangible, the transcendental and, if one pushes it further, an attempt to unlock the mysteries of the universe. Traditionally, this has been a scientific quest, but it is one which Neustetter subverts into an abstract, visceral adventure that has more to do with the act of seeing or viewing than gathering data. This idea is crystallised in his representations of observatories.

A wooden maquette of an observatory, titled The Observatory I, evinces the human compulsion to view the world beyond the earth, to surpass that which can be seen by the naked eye and thus a drive to transcend human limitations. The scale of Neustetter's model allows us to view this fixation from another perspective, one which highlights the sense of futility in this kind of viewing: our greatest instruments of discovery are tiny in comparison to the territory they are intended to probe. Neustetter's purposefully inconsequential drawings also demonstrate an awareness of this senselessness. Instead of capturing the specifics of the night sky he views in Space between the Stars (Sutherland 1 & 2), he embraces an abstract engagement that is focused on the act of contemplation. For Neustetter, it seems that the act of seeing precedes moments of clarity: staring into the dark evening sky allows us to temporarily become severed from terra firma and our present existence. Nevertheless, his efforts to draw - albeit abstract documents - of starry constellations suggests that "viewing", an immersive kind of viewing, provides the means for him to take refuge from thought altogether: caught in the act of transposing, he becomes consumed by the forms that he views in the sky.

Of all the modes of documentation that he uses in this exhibition, it is his laser, sound, performance piece, Chasing Lights, that is the most visually arresting. Unable to view the northern lights, he enlisted the help of James Webb, one of his contemporaries, to record the sounds that are emitted when it appears. Neustetter transposes these sounds into "images" using water, speakers and a laser beam. Ultimately, this exhibition is a thesis on seeing. Neustetter is fascinated with both the bold probing instruments that stretch out towards the sky and the methods of capturing the wonders that they allow us to see.

But he is not distanced from this project because he is caught up in the visceral pleasure of surveying the dark abyss, studying the configuration of stars and immersing himself in this limitless vast space, which activates the imagination and allows humans to think beyond the present. It is an imaginative space, which provides the inner eye with the ultimate reflexive motion: to view the world as if one is no longer of it. - published in The Sunday Independent, 10 January, 2010
Posted by Mary Corrigall at 12:12 AM