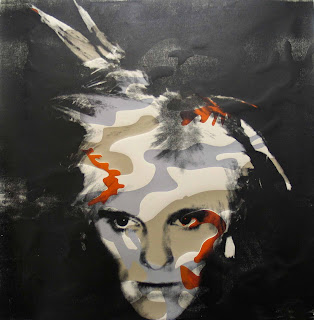 As one who has always shown disdain for those who believe that products, creators, from Western centres are automatically superior I was kind of taken aback by my excitement at the prospect of interviewing Gavin Turk. I like to think that it wasn’t an ingrained response but rather one related to the fact that I was living in London during what I consider to have been the height of his career. A fact which he sort of acknowledged when he remarked during the interview that the lifespan of an artist’s career has shrunk; that it no longer lasts a lifetime. He partly blamed the, er, media for this. I am not sure I altogether agree with that: I can think of many artists who are enjoying life long careers. But I suppose his point was that the pinnacle of their career has perhaps been truncated by overexposure.
It’s doubtful that Turk got to read my interview but if he had I think he would have been most pleased by the way in which his artwork Blue Elvis was further distorted by being reproduced in the newspaper. My editor was concerned that the image had been degraded but I assured her that it would have been much to Turk’s liking.

I don't have any nuanced non-verbal gestures to go on; only Gavin Turk's voice, marked by a British accent. Telephonic interviews are always a tricky business: a bit like eating with your eyes closed. But I can easily picture his visage; it is a signature motif in his art. Of course, it is disguised somewhat, as he characteristically superimposes it on images of icons such as Che Guevara, Andy Warhol and Elvis Presley or its likeness appears in lifelike wax self-portraits, such as Pop (1993). He by no means employs straightforward portraiture; in Pop he presents a portrait of a hybrid being, born at the intersection of popular culture and celebrity myth-making.
He fuses elements drawn from a variety of personas: Sid Vicious pictured singing Sinatra's My Way in the pose of Elvis Presley playing the part of a cowboy in a movie, an image which Warhol silk-screened. They are copies of copies of copies - public figures like Turk, who are not presenting themselves but are mimicking other figures. Their real identity is obscured by pastiche and stylisation, they have become caricatures of themselves and others.

"I hope that people are able to see and not see what my images are. That they can recognise an image but don't quite recognise it. I think that art should somehow check people's preconceptions, that somehow it suggests that things aren't quite what you thought. There should be an inbuilt awkwardness with images," explains Turk.

Turk's authentic identity is obfuscated in his multilayered images. But, of course, as this British artist has become a household name in his country and international art circles, his position in these images has shifted: he is no longer an anonymous appendage to the work: he, like his famous subjects, has become a recognisable but untraceable enigma. Also the regularity with which his face has appeared in his art has established it as a kind of signature of his work. Initially his face or what he terms "a performance of himself" in his art gave expression to the presence of an Other, says Turk.
"So maybe there is a point that 'Gavin Turk' represents the audience but it gets more complicated because if then 'Gavin Turk' becomes recognisable then suddenly it becomes 'Gavin Turk'.
"I think, originally, when I used my face I was less known than the frame I was putting around it. Somehow I felt that these elements could critique what they weren't but now it gets more difficult... the idea that the enigma starts to move in a different direction. I am not sure how to go with that; that's my next problem."

Rather unusually Turk started his career backwards, in the sense that his initial art-making was engineered to imagine himself as if he had already enjoyed a successful career. This notion crystallised in his infamous Cave (1991) work, which consisted of an empty artist's studio where an English Heritage plaque was displayed. It stated: "Borough of Kensington Gavin Turk Sculptor Worked Here 1989-1991."

"I was trying to think what I would be making if, for instance, I had already had this successful, celebrated career as an artist. Where would that take you to, what would you see? I was starting from the point as if (my) art was over and I would have to work backwards and fill in the space (that came before)."

Turk's novel approach didn't find favour with the academic board at The Royal College of Art in London, which didn't believe that his Cave work warranted a MA certificate, but it captured the attention of the art world, media and public. So much so that, to this day, Turk's art remains associated with this work.
"I find it a little bit sort of on my back because it was 1991. It is quite long to have to deal with that."

The story of Turk's career has also been overshadowed by the Young British Arts label, or YBA as it is more informally known, when his art caught the attention of Charles Saatchi, a prominent British collector and pseudo-art dealer, who displayed his art under that label at major exhibitions. Many feel that Saatchi has unjustifiably enjoyed a position of authority in the British art world, making and breaking careers at his whim. "Varied" is how Turk describes his feeling for the über-patron.

"I would agree that he did have an important role within the creation and construction of the YBA moment/movement. Although I think it was probably quite personally motivated, now he is personally interested in other things, which could be good... I have had a distant relationship with him. He is a strange enigmatic character."

Apropos the YBA label, Turk proposes that its cultural cachet has been exhausted. Evidence of this could be seen at the exhibition Pop Life, Art in a Material World, which showed at the Tate Modern last year, where Turk's work was exhibited alongside other famous YBA artists, such as Damien Hirst, Sarah Lukas and Tracey Emin. The display included a sign which read "the almost infamous YBAs". Turk says he is unsure what the phrase implied but suggests that it was an indication that the label was no longer applicable.

"We are now something else but we haven't got the next name (yet), so we are slightly stuck with foot in that room and that room is kind of closed . I don't think we can all be Young British Artists any more: we are not as young and I am not so sure art is so culturally defined any more."

Turk's mode of expression has been driven by a desire to upturn the notion that an artist must display a unique signature to operate within commercial and cultural circuits. As such, he not only selects icons as his subject matter but has appropriated famous artists' aesthetics. This has led some to suggest that his work has no idiosyncratic character and that he set out to create a "name for himself without a product".
Turk refutes such claims.
"Quite often if you look at my work or look at an exhibition of my work you might not necessarily know that it is by me. All the mark-making is quite consciously connected to other people. But maybe it is possible to talk about a signature style but maybe the signature is one of the artist using other people's signatures," he quips.

Nevertheless, he suggests that there is nothing about his art that "belongs" to him. Challenging traditional notions of authorship beats at the heart of his practice.
"Whether I am using my own work or someone else's work is no different. It is all a matter of interpretation in terms of ownership in art. For instance, if an artist makes a sculpture with felt, everyone will immediately think of Joseph Beuys's work because he somehow has a kind of signature on felt. He has made some sort of notable work with felt and everyone that uses the material is using his work or something of his signature.

"Artists appropriate images from the world and (therefore, shape how) you experience the world; you look at a bin liner and you think of it as being a Gavin Turk. Artists just simply re-signature, re-authorise the visual experience until another artist does another signature on top."

The Warhol signature is a recurring motif in Turk's work and his Cape Town exhibition at the Goodman Gallery Cape, entitled Mirror Stages, foregrounds his relationship to Warhol - apparently Turk's idea to cover the gallery's walls in foil to conjure the appearance of a mirrored surface dictated the exhibition's thrust.

Warhol has had a pervasive influence on contemporary art theory but also how the general public views art, suggests Turk.

"I see him as a filter through which contemporary art gets seen and his influence has generally been obscuring for every artist, wherever they come from. There is a button on every computer which turns your family photographs into a Warhol image. The art button is a Warhol button."

Initially Turk found Warhol's art "really difficult".
"I was quite classically taught art at school and told things like you shouldn't draw a tree halfway on a page, that you shouldn't smudge your drawing with your hand or cross things out and to be quite faithful or neat with your work. The way Warhol was printing his images on top of each other meant he was obscuring his own work. He was using a lot of black, which made his images dirty and noisy. Classically we wouldn't have been interested in it."

It was only later on in his career when Turk became aware of the significance of the "slightly disruptive" nature of Warhol's art that he realised he could harness that character for his own work, such as the camouflage print which "added extra layers of information" to Warhol's 1986 portraits, which then become the main source for Turk's 2007 solo entitled Me as Him (in reference to Turk appropriating the art and physical likeness of Warhol in his portraiture).
"I am hoping (that by using) the cliché of Warhol I am able to talk in a common language in this period of PhotoShop, where everybody has seen or has had access to the idea of the photograph as being corruptible that you can put someone's face on top of someone else or change the context."

Turk is quoted in an article as stating that his ambition was "to be an artist that ends art". Turk doesn't recall making the remark and laughs at the suggestion.
"I suppose that is the optimum state that any artist would want. As I make a new piece of art I am trying to correct and make better a piece of art before. So there is a sense that you are coming to an end."

Complicating and invigorating his practice, Turk's goal is constantly shifting.
"It is a game that moves as you play; the closer you get to it, the more you realise that there is more to do. You open a box and realise that there are more boxes inside," he says. – published in the Sunday Independent, January 17, 2009.
Posted by Mary Corrigall at 6:56 AM