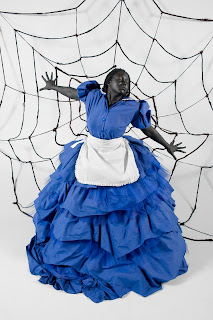 In my article I sound like I begrudge doing "Best of" lists but really I find the process extremely beneficial. I really enjoy revisiting (stimulating) work that I have already written about; I almost always find that a second reading throws up new insights. This was particularly the case this year with Colin Richards Parrot Parrot, which I think offers something new every time you write about it. I rushed my first review of his work: my mind was cluttered by all the other shows on during the Spring Art Tour and in usual fashion I had just an afternoon to do a write-up. I think that few readers grasp the limitations under which critics write – the short turn-around time, which doesn’t always produce the best results.
Before I give you my selection of the best 2009 exhibitions I would like to point out two important points: 1) Regrettably I didn’t get to Cape Town in 2009 so the absence of any Cape Town shows is no reflection on the quality of art shown in the Mother City 2) Interestingly, I only selected solo exhibitions; the standard of curating in this country remains uninspiring. Nevertheless in 2009 I did enjoy Storm and Liza’s Nation State at the Goodman (Us, curated by Njami and Malcolmness felt like a variation on the same theme) and Anthea Buys’ The Double Body, which showed at the UJ Gallery.

THERE IS a certain sense of futility if not naive arrogance attached to pronouncing some art products better than others. Intrinsically art is a contested field: as rapidly as definitive boundaries are erected to demarcate its character or purpose they are just as swiftly challenged and dismantled, ever widening and complicating the discipline. Within these fluctuating conditions works and ideas that are revered can just as easily be declared passé. Besides, how does one identify excellence in a field when those who challenge any criteria that may entail are prized for doing so? It is within these problematic and contradictory conditions that the art critic is forced to operate, constantly charting unmapped territory, committing our definitive pronouncements to paper, to history.

This year was a particularly bountiful year for the discerning art critic. While an economic recession might have seen some gallerists choosing to stick with tried-and-tested names, thus preventing unknowns from entering the local art circuit, three of the most exhilarating exhibitions were produced by artists who have yet to make a name for themselves: Mary Sibande, Vaughn Sadie and Alistair Whitton.


Sibande's Long Live The Dead Queen, which showed at gallery Momo in Joburg, was undoubtedly one of the hottest. Dressing up in a restyled domestic worker's uniform, Sibande would inevitably grab headlines; but there was substance behind the contentious images she created. Sibande didn't pose in any ordinary domestic worker's uniform. She transformed the outfit so that it encompassed the figure of a "madam" from a bygone era. In this way the fate of these two figures was inextricably bound to each other. It also allowed Sibande's discourse to be situated in the realm of fantasy, which proved the ideal context in which to unpack the politics of the madam/servant dichotomy without it degenerating into a clichéd tale of woe that would underpin the domestic worker's victimhood.


In positing her expression in the realm of fantasy Sibande was able to engage with a very pertinent issue in post-apartheid South Africa: aspiration. She made two interesting statements on the topic: because her domestic-worker subject can only dream of becoming a madam it is implied that even if this subject is able to realise this ambition, she is still tied to the maid/madam dichotomy - albeit that she occupies a position at the other end of this socio-ideological spectrum. Another highly contentious aspect of her exhibition had to do with the fact that Sibande, as a well-educated and empowered black professional, was choosing to slip into or assume the identity of a domestic worker. Such a move reverses the notion of aspiration.
In this way Sibande's performance presented the unthinkable: she was denying the goals of the political struggle. Sibande is not the first artist to don the domestic worker's uniform as a form of subversive expression: Asanda Phewa, an up-and-coming writer and actress, performed a similar act in A Face Like Mine, which dealt with the concerns of a new generation, who are buckling and rebelling against the expectations set by the struggle generation.

Part of the attraction behind Vaughn Sadie's Situation, which showed at the Bank Gallery in Durban, was that it probed beneath the surface, delving into an overlooked area of the urban landscape: artificial light and how discreetly it (re)constructs reality. Sadie could have chosen photography to engage with this topic, which would have been dull and expected, but instead his exhibition mainly consisted of ready-made objects configured into seemingly banal displays. Sadie stripped back the physical structures or decorative casings in which artificial lighting is usually embedded. Such structures help generate the illusion that artificial lighting is natural. In this way Sadie forced viewers to reassess this ubiquitous and pervasive feature of the architectural environment and how it quite unobtrusively affects and shapes experiences of spaces. Sadie's work is undeniably fresh: not just the subject-matter but its execution. He forces us to view our environment differently if not more critically. His work could be described as "reorientating". He also evinces a knack for expressing a multitude of complex observations in a very simple and uncomplicated manner. In other words, he is an adept communicator.

With his gift for articulating the manner in which the truth is obscured from us, Alistair Whitton's exhibition Patmos and the War at Sea,which showed at David Krut, hails from the other end of the spectrum. Whitton appeared to be obfuscating reality, or past events, by presenting a largely abstract series of photographs that were each teamed up with a page of coded message - which contained letters pertaining to the title or subject-matter of each photograph. He encouraged viewers to engage with familiar wartime imagery anew, but he also suggested that the full nature of these images, of the past, cannot be fully penetrated. In this way he made some astute statements about our access to trauma, particularly well-documented traumas that are unpacked ad infinitum via television products, the relationship between language and imagery, the nature of knowledge and most importantly, he challenged our expectations of photography.

Two of the other gripping exhibitions this year were produced by two art world heavyweights, who rarely disappoint: Colin Richards and Brett Murray. One is kind of loath to use such an overdrawn and glib adjective as "exquisite", but that is precisely the word that came to mind while viewing Richards's Parrot at the Art on Paper Gallery. The exhibition was visually spellbinding but also conceptually rich, offering food for thought long after one had left the gallery. The meticulous execution and physical labour involved in the making of the three-dimensional sculptural works and drawings forced viewers to contemplate the act of mimicry and representation. Just like the motif that was central to the exhibition, the parrot, who repeats the words that humans utter in its presence, artists have traditionally been engaged in copying reality. There is a sense that such acts are empty, and vacuous, especially in the contemporary art canon where a precise imitation of reality is considered to be a mere technical attribute. The art world prizes conceptual content over visual richness.. Can visual representations exist as substantial art objects in themselves? Richards ever so subtly alludes to a socio-political discourse in this exhibition: this is a different kind of ideological substance, elements of which have been overused and repeated to the point that they are meaningless. Thus concepts don't neccessarily lend substance to a work. In this way the exhibition was less about whether the parrot is able to be human but the ways in which humans have become more like parrots.

Brett Murray's Crocodile Tears, which showed at the Goodman Gallery, reflected on empty sentiments expressed by the old political order and the new, which repeatedly declare their concern for the impoverished, while misusing resources that could benefit this segment of our society. Murray created a powerful analogy between the country's new elite and the French aristocracy of the late 1700s, who lived lives of excess while nonchalantly neglecting their impoverished subjects. Of course, the analogy intimated a grave caveat: the masses in this country will eventually rise up and rebel against such an abusive political authority as was the case with Marie Antoinette's minions during the French revolution. His exhibition was incisive and witty. He very astutely summed up the political status quo and launched a very precise attack on South Africa's political and social elite. Presented prior to the election it was a subversive missive that challenged the political rhetoric that various leaders were employing to persuade voters. - published in The Sunday Independent, December 20, 2009.