Pet Cemetery: Image of the Week 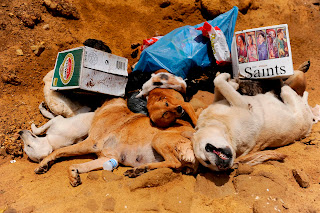 There are those images that become so embedded in your consciousness that you wish you had never seen them at all. Such has been the case for me with this one, which appeared on the front page of The Star, a couple of days ago. Surprisingly, or not too surprisingly (in my experience newspaper folk in this country are visually illiterate), this photograph of Jennifer Bruce’s wasn’t the main image: instead a photograph actually showing an SPCA worker dumping dead animals at this rubbish site was used to substantiate that organisation’s culpability in this nasty deed. But for me this one is aesthetically and ideologically more powerful: the rubbish strewn among the cadavers highlights the fact that the animals are as disposable and redundant as a day-old newspaper. It also kind of conjures for me Gothic/Medieval painting (interestingly Gothic is said to have been a synonym for barbaric) of the likes of Hieronymus Bosch: it expresses a similar kind of excess or extreme malaise.

Though much of the debate around this story, titled the “Pet Carcass Scandal”, has centred on the fact that the SPCA shouldn’t be dumping dead animals at rubbish sites, for me what is more poignant is not the way in which in the animals are disposed of but that animal lives are so disposable, that they are simply part of the detritus of urban living. That all these animals bodies are being dumped in the same place where  empty milk cartons land up brings this fact sharply into focus, nevertheless, to me it is no worse than their bodies being incinerated at a proper establishment. Thousands of healthy animals are being put death because they have become redundant. Where and how it is done does not obviate this actuality.

Thus I think this powerful photograph captures the disposability or redundancy of living beings in our consumerist society. This photograph also demonstrates that while artists may spend days, months or years conceptualising a photograph, now and then a photo-journalist stumbles upon a story, an unexpected incident that offers a kind of richness, which a contrived or premeditated image simply could not summon. This image's power is directly related to its ‘uncontrivedness'.

This photograph of the dead dogs is obviously sensationalist; nothing quite tugs at our emotions than mistreated domestic pets – Carte Blanche’s popularity is partly due to their continued concern with this topic. But I am equally intrigued why we find this kind of topic and or imagery so compelling.   Ultimately, this photograph, and the features which we perceive to be lurid, articulate the paradoxical relationship we have with domestic animals: we care about animals but only so far as it is convenient for us to do so.  They were discussing this story on the radio and someone phoned in to tell about her neighbour who puts her dogs down everytime they get sick.
Keeping focussed on the means of disposal of the dogs rather than the phenomenon itself is obviously a more comfortable line of enquiry for our society to pursue – we don’t want to be implicated by this grotesque photograph. Nevertheless this photograph allows us to confront what our society has become; viewing it is like a form of self-flagellation.

Posted by Mary Corrigall at 11:19 PM No comments: