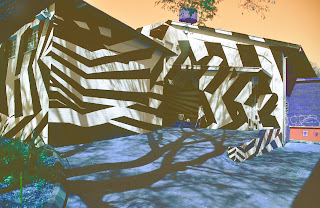 IN 1996 Stephen Hobbs offered a rainbow up for sale. Not a photographic, sculptural or two-dimensional representation of a rainbow but the genuine multicoloured arc that sometimes spreads across the sky after a heavy downpour. Surprisingly, he had quite a few takers. But this was hardly astonishing for an artist who launched his career with an ice block (presented on a stand), attracting the attention of art dealers such as Warren Siebrits and South Africa's one-time enfant terrible, Kendell Geers. Hobbs wasn't just an art prankster poking fun at the art world. Well, not completely - he was fascinated with the notion of the ephemeral and how it manifested in architecture.

His ice block may have found a buyer in the Belgian collector, Pierre Lombard, but ultimately it was a transient object that could never be claimed. But it wasn't altogether motivated by his rejection of the commodification of art. "The idea was that by the time my lecturers came round to assess my artwork, it would have melted," recalls Hobbs. He sees a kind of poetry in the transient or that which remains physically beyond one's grasp. For him there is nothing more beguiling than that which leaves no trace. His fascination with this phenomenon ties in neatly with the conceptualist ethos that drives his practice. For the conceptual artist, ideas take precedence over the art object. Its full existence resides in the ideas that informed it.

"For the artist, the power of a statement is as good as the artwork. For me, the significance of what I do resides in the texts and essays I write about my work because I think that is where the integrity of one's work lies - not in making the art object per se, but in questioning it," observes Hobbs.

It's an ethos that has given life to a number of cerebrally and sometimes visually startling artworks such as 54 Storeys (1999), video footage of a trip down the inside of the Ponte Towers, once a popular site for suicides, and consequently the ideal manner in which to visually explore the darkest depths of Joburg's inner city. Hobbs's obsession with ephemeral phenomena has also been influenced by living in Joburg, a city in a constant state of flux, and the role he has played in the regeneration of the city through managing most of its high-profile public art projects as co-director and co-founder of Trinity Sessions. Hobbs has come to resent the time and energy that the Trinity Sessions steals from his own artistic practice and how it has overshadowed his persona as an artist - he calls it "the beast" - but it has further cemented his obsession with the fleeting quality in architecture and the urban landscape.