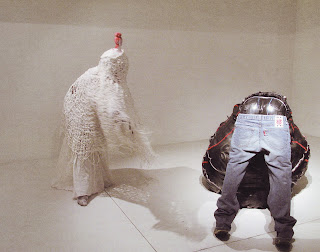 Ephemeral, trend-driven, concerned with surface embellishment and most often a product of  mass-production, fashion and clothing are often thought of as a superficial manifestation of popular culture. A craft rather than art object. Nevertheless, since Andy Warhol demonstrated how the symbolic value of commercial design could be applied in the realm of art and postmodern theory turned the art world on its head - redefining and expanding the definition of art - the lines between craft and art have blurred.
The last decade in South Africa has seen a growing affinity between art and fashion. Though it's hard to pinpoint the genesis of this new phenomenon, it's possible it could have been helped by an identity crisis and a desire to forge a new national culture, which clothing is uniquely equipped to address. Certainly it was helped along by a number of high-profile exhibitions of African material culture such as Ezakwantu: Beadwork from the Eastern Cape, which was held at the South African National Gallery in Cape Town in 1993. The beaded garb that was displayed at this exhibition was never referred to as clothing - there was a desire to elevate its status - but shown in a gallery created the notion that clothing had a symbolic significance that aligned it with fine art expression. Just as African material culture can be viewed as valuable markers of cultural and social mores and identity, so too can these elements be gleaned from Western dress. In this regard, fashion's immediacy and its ability to translate often complex cultural issues into readily consumed garments is now viewed as an asset and no longer a characteristic that undermines its value. The ability of fashion designers to capture a moment in time in a trendy fashion item has also meant that such items could be no different from photographs.

As the most obvious marker of identity, clothing has proved to be a useful medium for a generation of artists trying to redefine identity or at least challenge the fixed identities of the past. Lolo Veloko, Lawrence Lemaoana, Nicholas Hlobo, Nandipha Mntambo, Mary Sibande and Athi-Patra Ruga are part of this group of artists employing clothing as their main vehicle of expression. There are also a number of fashion designers who employ a fine art approach to their craft, while there are others who move between both realms - showing their work in galleries and on catwalks. The Strangelove label, headed by Carlo Gibson; Lisa Jaffe of the Guillotine fashion label, David Tlale, Ruga and Black Coffee, whose gallery installation won them the Mercedes-Benz Award - which has traditionally been an award reserved for fine artists - are part of this burgeoning faction of designers.

Ruga had always intended to become an artist but opted to study fashion as one of his central concerns had always been the politics of the body - he felt that studying fashion would better equip him to engage with that theme. After completing a degree in fashion he became embroiled in the seductive world of fashion, but when he resisted taking part in the Afrochic fashion movement - which started in 2000 - he found himself a stranger to that industry.
"I was concerned with the body not expressing a nationality or a South African identity. I felt isolated; I was going against the spirit of the time," says Ruga.
Always imbuing his clothing with layers of meaning, Ruga often found himself creating unwearable clothing and became frustrated with the short life span it enjoyed on fashion catwalks.
"A fashion show is just 20 minutes; I wanted to give my work longevity, an extra life, which I found I could do through performance (art). I became more interested in using fashion and clothing as a mode of expression in art rather than in fashion," said Ruga.

Ruga exploits clothing's metaphorical or symbolic values. He sees fashion as more than a functional object but as a powerful medium of expression.
"It communicates to others who we are and how we feel about ourselves. Before someone even talks, we know something about them just based on what they are wearing."
But just as fashion reflects identity, it can similarly be the tool to redefine one's identity, giving us control over how we are perceived. It is this aspect that has largely appealed to artists seeking to challenge ways in which South Africans are defined by their physicality. Clothing can also help refashion the body.
"It's a way of transforming your body. You can transform your entire silhouette. You can have broad shoulders or a tiny waist," observes Jaffe.
"Everything has become physical and the way things look, the facades. The outside that is the new inside. You may have issues but if you wear a certain jacket you must be feeling good inside."
In this way clothing and its more ephemeral derivative, fashion, are part of a visual lexicon no different from any used in the visual arts - hence its appeal to artists. For designers who are more steeped in the business of fashion, this visual idiom has allowed them to reflexively unpack the nature of their trade.

Read more »
Posted by Mary Corrigall at 1:46 AM No comments: