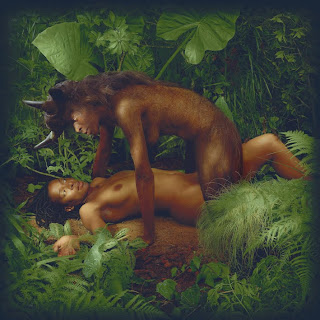 I know that I have already posted this image by Nandipha Mntambo before but encountered it for the third time at an exhibition last night; the opening of Umphatsi Wemphi, her new solo show at Brodie/Stevenson. This has to be the hottest image in town: why else would everyone want it... chatted to Nandipha about it last night I told her how our photography department at The Sunday Independent (one guy) argued that it was too dark to be printed. I knew that Mntambo had intended for it to be dark and not just in a macarbe sense but actually visually dark. Her explanation: she wanted people to have to look at the image really closely to make out the details or for the details in the image to be revealed slowly. I quite liked her explanation; there is something poetic about her intentions it also challenges the speed at which we consume imagery in our image-saturated world. She said something else that was surprising and peculiar: she had never really given much thought to clothing even though her aesthetic is so closely related to it - especially all the cowhide works that are moulded on her body. It contradicts what I have written about her work. Aside from a series of some rather ghastly charcoal drawings it was a stimulating exhibition. I particularly liked her Penis - Vagina One Man Capsule work it echoes the ever popular Rape of Europa in that the female and male (aspects of the self) are unified, here of course into one singular object that one can inhabit and step into. But I enjoy the symbolic significance, the blurring and unification of the genders, it is like sex the male and female become one instead of it being conflicting entities that fight for supremacy as evidenced in the work of Nicholas Hlobo.
Posted by Mary Corrigall at 7:49 AM 2 comments:

The Aliens have Landed 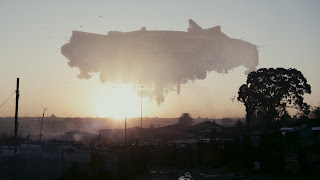 A spaceship looming over Joburg's characteristic skyline is an incongruent and unexpected sight. It is an image that local cinemagoers are unlikely ever to forget. Not just because an extraterrestrial invasion of Joburg is far-fetched or even because we tend to associate such staple science-fiction scenes with Hollywood products, but because this (mostly) home-grown cinematic product heralds a new era in South African film-making. Foremost, District 9 is a visual spectacle like no other. It feeds at the intersection between the imagination, history and popular culture, giving rise to a truly transcultural hybrid product. Further contributing to District 9's hybrid character is the fact that Neill Blomkamp, the writer and director, has employed a heady mix of genres to narrate his unusual tale; from sci-fi and mockumentary to action-drama, with a heavy political subtext thrown into the mix, Blomkamp has produced a film that is tricky to pigeonhole. Consequently, it presents a peculiar visual and ideological aesthetic that breaks out of any established cinematic mould, making it the first of its kind.

Because it draws from so many familiar film genres, it has broad appeal; action lovers to academics will all be titillated by Blomkamp's sci-fi spectacle. It is likely, therefore, to be the first bona fide South African blockbuster - Leon Shuster's record will finally be broken - thereby ushering in a new epoch in homegrown cinema. But, most important, it is the first local film that probes our dark and tempestuous past and present in such a unique manner. And this is where the sci-fi impulses in the film come into play: all the fantastical or otherworldly features create distance. Thus segregation, violence and prejudice play out in an alternative reality to our own, althoughthe setting and earthly characters are eerily familiar. In this way, South Africans will be able to view their culture from an objective standpoint - a perspective that has escaped our cultural producers thus far. But are we ready to view our history from such a position, particularly when it comes packaged in a satirical action drama tailor-made for American viewers? Does the sci-fi angle only serve to trivialise apartheid?

By employing a sci-fi idiom, Blomkamp does fix his audience in a remote position that evinces our society's proclivity for violence and prejudice, which manifests or is amplified whenever it is presented with an unknowable Other. Here, of course, the outsiders come in the form of aliens or "Prawns" - the sobriquet that the Joburgers assign to this crustacean-like population that come to seek refuge in their city when a malfunction occurs with their spaceship. The "Prawns" couldn't have picked a worse place for a breakdown: they are summarily rounded up and dumped in a township called District 9. Here they lead an impoverished existence, forced to scour rubbish dumps for nourishment and objects to build shelters. And if this isn't bad enough they must also contend with Multinational United's (MNU) heavy-handed forces. MNU is a private defence contractor that the government has engaged to deal with the relocation of the "Prawns" to another locale, where they will be more closely monitored and isolated from mainstream society.

Read more »
Posted by Mary Corrigall at 7:31 AM No comments: