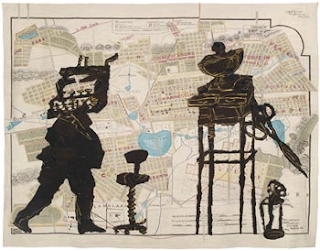 I am starting to enjoy all these little open-door soirees at Arts on Main – David Krut launched their new space at the centre a couple of weeks ago with a champagne brunch. This past Sunday it was the Goodman Gallery’s turn with an informal celebration of their new project space and what better than to use William Kentridge’s six metre long tapestries to draw crowds to the new exhibition space. Maybe it was because the launch was held early on a Sunday morning but Kentridge followers tend to be on the dark-side of fifty and a well-moneyed lot: I don’t think folk this side of town have seen such a concentration of Jaguars parked in their midst. Art critics and media folk were thin on the ground: has a Kentridge showing lost its cachet? The tapestries were undoubtedly beautiful; in itself the scale of the works is enough to engender awe. However, one can’t help wondering whether tapestry is the appropriate medium for his brand of art, which is defined by its collage properties. The process of tapestry naturally works towards interweaving divergent materials into a cohesive whole and while collage embraces a similar goal, with collage it’s never about creating a seamless sense of unity; the rough edges and multiple textures are given room to assert their own idiosyncratic visual persona. In such works the nature and process of bricolage can articulate the work’s ideological significance. The maps that Kentridge displays in his art for example are shown to be dated items appropriated for his art: redefining old artefacts adds gravitas to his work. In the tapestries this aspect is obviated.  None of the tapestries were displayed with any titles and one was left with the distinct feeling that they simply functioned as decorative pieces that simply pay homage to a visual signature – dark silhouette over map - that Kentridge has made world-famous. Not good. When I spotted Danny K and Lee-Anne Liebenberg I knew I should have stayed in bed and carried on reading Everything is Illuminated, which is much more brilliant.
Posted by Mary Corrigall at 10:11 AM No comments: