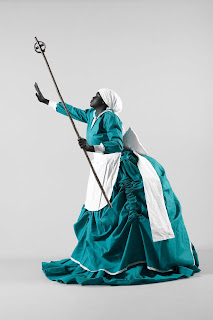 OVEREXPLOITED and positioned within the heart of white South Africa, domestic workers have been the ultimate victims of a skewed social and political system thus their occupation embodies the vexed racial dynamics in this country.

Therefore, the figure of the domestic worker provides the ideal vehicle to unpack the politics of Self and Other. It is this aspect that Mary Sibande meditates on in this exhibition, and while all the sociopolitical baggage attached to this character remains in attendance simply because the domestic worker is such a politicised figure, Sibande's treatment of her subject matter is unexpected and unconventional.

Her sculptures and photographic artworks depicting the domestic worker aren't by any means sociopolitical products employing, say, the documentary genre that tends to evoke pathos, anger, shame and humiliation in the viewer. Their theatrical quality confidently roots them in the realm of fantasy, thus obviating those predictable knee-jerk emotional responses which ultimately have a didactic goal and underscore the domestic workers' role as victim.

Sibande's work grapples with transcending this actuality, which not only has ramifications for the domestic worker but has significance for all of apartheid's victims, perpetrators or beneficiaries - if the domestic worker is able to liberate herself, we can all be free from the past.

It's heavy stuff and these are ideas that other cultural producers have touched on before, but Sibande's expression is exceedingly inventive and elegant; besides, her art reaches towards an unexpected conclusion.

To prevent spectators' viewing the domestic worker as a victim Sibande situates the discourse in the realm of fantasy through several visual strategies. The background of all her photographs is a neutral pale blue, denoting a photographic studio setting - the ideal environment where identities can be remoulded with the aid of lighting, costume and make-up. In this way she detaches the domestic worker from reality.

In the design of the domestic worker's get-up, Sibande activates another level of fantasy. With a bustle, pleating, organza sleeves, layers of petticoats and rouching, the domestic worker uniform is transformed from a functional everyday item into a pseudo-Victorian dress suited only to a sedentary life. In such a get-up all menial tasks would be impossible. So while her outfit fixes her in a position of servitude it can, with adaptions, precipitate her liberation.

The clothing that Sibande has developed for this exhibition is central to her expression. For it is through the uniform that she is best able to manipulate the identity of the domestic worker, transplanting her not only into a bygone era but into the persona of the white European colonial - her mistress. So while the domestic worker appears to have transcended her station, she is similarly trapped in the same paradigm that fixes her as a cleaner. Her liberation is illusionary and seemingly impossible; even when she dreams and aspires for an alternative existence, she is locked into the madam/slave dichotomy. She can't think outside of it even when she isn't limited by reality.

The other intrinsically fictional feature of the work is enacted by Sibande herself, who poses in the photographs assuming the domestic worker's identity (casts of her are used for the sculptures). In assuming both the author and subject roles in her photographic works Sibande subverts the politically loaded relationship between subject and author, which in the context of South African art has been determined along racial lines. This way Sibande has complete control over how she is represented and she creates the conditions in which fantasies can best materialise. Daydreams are the products of an inner dialogue, which explains why Sibande is pictured with closed eyes. She isn't just blocking out the present, or the elements that keep her grounded in reality that deny inventions, she is engaging in a dialogue with herself. Hence, occupying the dual role of author/ subject has significance beyond rallying against artistic conventions.

Most importantly, in dressing as a domestic worker, Sibande herself is living out a "fantasy" of sorts. Given its undesirability and the low status it signifies in our society, the domestic worker seems an unlikely figure to aspire to be, and as fantasies tend to provide individuals with a chance to aspire beyond their present circumstances, Sibande's performance presents the unthinkable.

It is also absurd given that Sibande is asm a well-educated and empowered black professional. In masquerading as a domestic worker, she denies her affluence, her status, which in post-apartheid South Africa is thought to epitomise the goals of the struggle, which were to establish a brighter future for the youth.

Sibande isn't challenging or rejecting her affluence - it is her confidence in her status that allows her to parade as a domestic worker. The domestic worker is a mask, like any other she can slip on and off at will. The ease with which she is able to do this implies that no one is defined by their appearance. In assuming the guise of this highly politicised character, Sibande is able to explore, ridicule and subvert the structures that victimised the domestic worker. It's a cathartic and subversive act.

This is a remarkable exhibition that teases the mind long after one has finished viewing it. Its boldness, both visually and conceptually, is a surprise for a young artist's first major solo exhibition. - published in The Sunday Independent, July 26, 2009
Posted by Mary Corrigall at 5:58 AM No comments:

Avant Car Guard: As Gaudy and Alluring as Ever 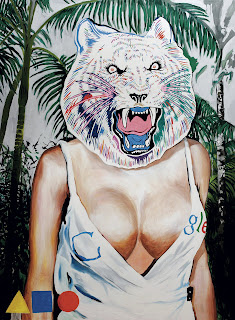 IT ALWAYS seemed that Avant Car Guard's flippant and irreverent brand of art had a sell-by-date. It is expected for young peripheral artists to challenge the pretensions of an art world they are yet to be embraced by; it's a reflexive response that softens the blow of anonymity. Who would want to be celebrated by an insular and tiny art world anyway?

At least that was what was implied in a work titled Avant Car Guard dive into the South African Contemporary Art Market, a photograph which showed the trio (Michael McGarry, Zander Blom and Jan-Henri Booyens) preparing to jump into a puddle situated at the base of a sandy excavation site.

Of course, such artworks called on the South African art community to reassess its sense of self-importance.

Nevertheless, one couldn't help feeling that such strategies would inevitably seem awkward once the trio had found their footing in the world that they so hastily claimed to reject.

Their motivation for parading as a cohesive unit as a way of destabilising the conventional western art practice where the single genius/artist is celebrated also wouldn't hold much sway the moment they began actively pursuing solo careers.

But one would be foolish to think that the astute artists who comprise Avant Car Guard aren't aware of their flawed position. Certainly the title of this exhibition is an admittance, a response and a celebration of a widely held notion in the art world that the trio's brand of art has become passé, if not limited, by its own ideological stance.

The gaudy, tasteless and provocative paintings that make up the bulk of this exhibition are a wonderful retort aimed at an art intelligentsia that was starting to show signs that it had had enough of these rebellious upstarts. So in a sense this exhibition is emblematic of Avant Car Guard's attempt to retrieve ground, or at least enter uncharted territory and show the art world that they aren't a one-trick pony.

Certainly, switching their medium to painting has helped facilitate a new direction in their aesthetic.

Granted, there was an elegance to their constructed photography that has been lost, which has given way to a kitschy and showy brand of art that has less to do with parody and more to do with caricature.

Paintings such as Roger Ballen and the Fuck Dolphins, Dr Pallo 'Air' Jordan and Robin Rhode are all playful caricatures of figures in the local art world.

They reference illustration and with drips of paint running down the canvases they establish this sense of painting being a spontaneous medium rather than part of a learned and measured activity.

These paintings are (one hopes) purposefully vacuous statements, but they are visually alluring.

Drawing from fantasy illustration, comic drawings and rudimentary Photoshop effects, and employing a neon colour palette typical of Emo fashion, they are securely products of our time. As are these artists - their work exudes a reluctant recognition of their epoch.

The most striking aspect of this exhibition is the manner in which these artists parade the rhetoric of rebellion or demonstrations of rebelliousness without believing that it will result in transformation.

The textual works, such as one that simply states, "Fuck this, Fuck that", draws attention to the lack of intent driving their rebelliousness.

In a sculptural work, Resistance Art in South Africa, they reference a previous generation of rebels who rebelled against the status quo through their art. An inscription or subheading for this artwork states, "your pain was meaningless", implying that not only were their actions futile but as benefactors (they only list white artists) of a corrupt system their resistance was undercut by their complicity.

The discourse on rebellion as a central trope of art is the most interesting aspect of this exhibition, and shows the artists to be turning their assault inwards.

Avant Car Guard are a product of an art world that has rejected the belief that the narrative of art is evolutionary. In such a context there is no need for rebels to ignite the wheels of progress and in a world where plurality and multiculturalism is embraced there is no overlying central system to revolt against.

In such a context the act of dissension is obviated. Under the guise of Avant Car Guard they are able to explore this actuality without it having ramifications for their individual practices, in which the artist is expected to engage in the act of "breaking boundaries".

Though clichéd such ideas about art are, ironically, the necessary motivation to keep artists working.

That the members of Avant Car Guard move between making art as a group and pursuing their individual practices amplifies the contradiction between contemporary art theory and practice.

It's not a contradiction that they choose but one inherent in the schism between academia and commerce.

Despite art theorists' rejection of the artist/genius, in day-to-day life the white male artist remains the predominant figure in the art world.

One vacillates between hating and loving this exhibition. It is highly entertaining and thought-provoking but much of the art does parade a puerile façade bereft of substance, leaving one undecided whether this exhibition spells the end of Avant Car Guard's or has extended its life span. - published in The Sunday Independent June 28
Posted by Mary Corrigall at 5:51 AM No comments: