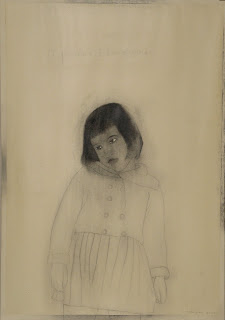 Around this time of year the mass media pays a lot of attention to notions attached to "love". Much superficial mining of the designation ensues but so rarely is the complexity and transience of this emotion that holds such sway in our lives probed in any meaningful way.

Terry Kurgan doesn't delve into romantic love with this exhibition but rather explores a more multifaceted derivative that is shared between parents and children. Ultimately, what she offers are more than glib observations. Her evocative and haunting portraits deliver uncomfortable but incisive insights into the dynamics between children and their parents and the shifting boundaries that characterise these relationships.

But in characteristic Kurgan fashion, this theme also serves as the point of entry into a wider discourse that examines the photographic medium and the impulses that drive it.

Perhaps this is best illustrated by a triptych of sepia photographs dryly titled Untitled 12, 13 and 14 (1999 -2005). They feature a young boy taking a bath. He is relaxed and at ease and quite clearly comfortable sharing this intimacy with the author of the image - presumably Kurgan, his mother.

This series recalls Natasha Christopher's Bath (2003) - created for the Everard Read Art Award in 2005 - which also featured her son taking a bath. Christopher chose to blur her photograph almost beyond recognition in an effort to underpin her avid desire for an intimacy that could not be made tangible.

For Kurgan this scenario is also a test of closeness. The boy in her photographs is obviously old enough to bath himself and does not necessarily need an adult in attendance, though concerns for his safety might still prevail. Therefore, the observer/photographer's presence is required if only to monitor him. These images consequently encapsulate the beginning of a loosening of a close bond. The boy is starting to revel in his independence from the parent. This reality manifests most prominently in an image in which he is pictured with his head under the water. For the author/mother, her attendance signifies a surrendering of control.

But despite this shift in their relationship they are still able to share the intimacy that bathing intrinsically entails. The boy is not ashamed of his nakedness; in fact, he seems to display it in front his mother quite unselfconsciously.

Photographing this scene obviously pushes this relationship to its limits, because it concretises the event, it makes the nature of their affiliation public. It also tests Kurgan's restrain, for the act of photographing places her outside of herself and the relationship and she becomes the impassive observer rather than the watchful mother - albeit that the two roles translate into a close scrutiny of the subject.

This is the irony of the medium; though it is most often in its daily use employed to capture shared intimacies, the act of photographing immediately creates a chasm between the subject and the author.

Having photographed children throughout her career, Kurgan has discovered that up until a certain age children aren't aware of being the subject in photographs. This allows for a more penetrative or unedited view of these subjects. They grant access to facets of themselves that they would withhold if they were more conscious of the character of photography.

This is evidenced in the triptych of the boy in the bath; he is able to share this intimate moment because he is not yet aware that he has become the object of a premeditated brand of observation. It is this type of naivety and innocence that Kurgan is fascinated by: a kind of semi-consciousness in which the child performs for the adult because the child has seen the performance before but doesn't grasp the gravity of the performance.

This dynamic is embodied in the title of the exhibition, which articulates a commitment to love without an understanding of the significance of the pledge that the promise to love is intrinsically unconditional.

A dark and macabre undertone unites the work on this exhibition, simply because Kurgan makes us conscious of the manner in which children make themselves emotionally available to adults, leaving themselves open to an inexplicit form of abuse but one that naturally occurs between parents and children.

Much of the exhibition comprises etchings of photographs that Kurgan has exhibited before such as It's a Secret (2009), which was part of her Scene of a Crime series (2005).

Revisiting or reworking these photographs in another medium suggests that the artist is eager to penetrate beyond the surface, that she is compelled by a desire to uncover the "unseen" subtext that lies buried beneath the glossy veneer of the photographed image.

Her unearthing, however, doesn't produce the desired results; most of the etchings are bland, detached and inexpressive renderings that fail to evoke any nuanced insight into the subjects. If anything, what Kurgan presents are bare skeletons of young people. They are haunting figures that are ghostly in their appearance with their dark- rimmed eyes, empty expressions and limp bodies. Kurgan implies that there is nothing beyond the surface of the photographic image, that they simply give the illusion of depth.
Posted by Mary Corrigall at 12:44 AM No comments: