Robyn Penn's views from a prison of pain 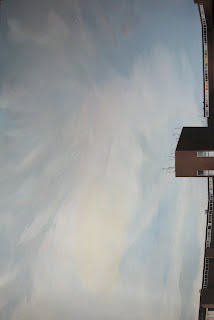 Scenes of expansive cerulean skies dotted with soft, white, swollen clouds have always caught the artist’s eye. Associated with transcendental, other-worldly or celestial experiences or beings, they have been a reoccurring motif in religious art and landscape painting. For South Africans, such vistas are emblematic of the African topography, fulfilling notions that the continent is infinite, offering unlimited freedom of thought, action and movement. It therefore seems incongruent at first that Robyn Penn’s paintings of skies are associated with brutality – as the title of the exhibit infers.

The title references the contexts that inspired the paintings – the artist’s experience of illness and the death of her father. Yet the brutality of death is never depicted nor covertly hinted at. Such an understated representation of death is foreign to South Africans, who have through our bloody past and crime-ridden present, tended to think of death as a quick and violent exit from life. Our concern is so often focused on the sense of loss that follows, we rarely mediate on death’s steady approach.

Penn explores this psychological territory by capturing the static view of a skyline offered to a bed-ridden patient. We never see an ailing patient; Penn keeps the viewer’s gaze directed at the vista out of a window. Had she depicted a sick subject, she would have evoked pathos. Instead, she slyly reverses and fuses the roles of subject and observer, fixing the viewer in the subject’s position.

The blurring of the lines between the subject and viewer is perhaps the most interesting facet of her work; in removing the subject of the viewer’s gaze she is able to tackle watching as an activity. The act of watching is not only enjoyed by viewers of her art but also by the invisible subject, who lies in bed waiting for death. Such a device also shifts the discourse from physical suffering to the mental torment that besets an individual who is limited by the body’s incapacities.

Penn’s approach mirrors Julian Schnabel’s mode of narration in The Diving Bell and the Butterfly, which documented Jean-Dominique Bauby’s experience after he suffered a stroke and was paralysed and unable to communicate. For much of the film, Schnabel narrates the story from Bauby’s point of view, presenting his disjointed and static line of vision. Though the composition of Penn’s paintings doesn’t appear off kilter, it recalls scenes from the movie in which Bauby was moved outdoors to view the sea and the sky. It was in these moments in the film that the brutality of Bauby’s condition was amplified. Open, tranquil and natural spaces are thrilling for most but for the sick or handicapped they are a reminder of the gravity and frustration of their situation. It’s like a prisoner glimpsing an open field through a window; its beauty is only momentarily uplifting.

Penn’s sky paintings also encompass the tops of buildings. This limited view of solid, immovable objects contrasts with the ever-changing, ethereal nature of the sky, further creating a sense of limbo by showing an existence between two irreconcilable states of being. The buildings suggest that the subject/viewer is still rooted in the world but the connection is tenuous.

Though the vista that Penn presents is fixed, she is able to mark the passing of time through the shifting configurations or absence of the clouds.
In Before the Heat (2008) there are only wisps of white at the horizon while the upper reaches of the sky are a dark blue. Similarly, Before the Rain (2008) and Before the Noise (2008) present minor alterations to the atmosphere that are only gleaned from close observation. It seems fitting, given that an ill person crippled by their biological afflictions should be in tune with nature; an awareness of their own physicality and its fragility creates an alertness to the nuanced fluctuations in nature.
This idea is further explored in the study of wilting plants that define a number of smaller canvases in the exhibition. The fragility of life has historically been encapsulated in the life of flowers so the reference here does read as clichéd. Nevertheless, it complements the larger canvases of the skies, driving the message home.
It is in identifying the shifts in the sky (and nature) that Penn correlates the role of the painter or artist with the dying patient. Both closely watch reality as observers rather than as participants, with a freshness as though they are seeing it for the first time.
Paradoxically, both must also look beyond reality’s physical manifestations, viewing life and themselves within a wider system. Ultimately, this is not an overly remarkable exhibition that will leave a long-lasting imprint on the South African art world. It is far too understated in its visual and intellectual character for that.

Nevertheless, Penn’s striking blue skies and what they represent hover on the fringes of one’s consciousness for days.
A Brutal Year is the first exhibition of the year in Jo’burg and it marks an unchallenging start to this year’s art calendar. One hopes its title will not be a prophetic one.


- Robyn Penn: A Brutal Year will be at Brodie/Stevenson in Johannesburg until February 14
Posted by Mary Corrigall at 9:05 AM No comments: