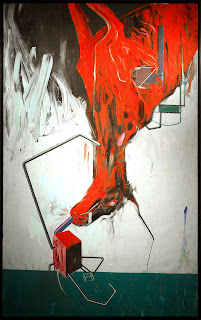 ONE of the most memorable moments in Catherine Meyburg's documentary film Kentridge and Dumas in Conversation (2009) is a scene with Marlene Dumas in her Amsterdam studio, where she turns over canvases propped up against a wall that have not been seen or displayed. These artworks are considered failures. Naturally, it is rewarding to learn that this great South African painter, one of the best-selling woman artists in the world, sometimes has an "off" day. But it also draws attention to the fact that a valuable aspect of Dumas's trajectory - albeit less visually satisfying - has been off-limits.

Just because these works are considered by her to be unsuccessful does not mean they have no worth: these failed artworks contribute towards our understanding of the elements - both visual and ideological - that Dumas and the art market consider notable, worthy of attention and adulation.

At the Unseen Works exhibition at the Rooke Gallery, the focus is not necessarily to show "failed" works - although the implication is that because they have not been on public display before, they are lacking in some way. There are other reasons why some artworks do not see the light of day. Such as in Roger Ballen's case. He is known as a prolific photographer, which means that not all his works can be accommodated in books or exhibitions. Also, there is a very distinct narrative binding his exhibitions and books - some photos presumably do not make the grade for the simple fact that they do not make a meaningful contribution to the discourse he is pursuing.

With Mark Kannemeyer, it is for a very different set of reasons that this series of paintings have not been on show before. For starters, he is not prized for his painting but rather his socio-political comic-art illustration. Kannemeyer's paintings were also student experiments conducted from the late 1980s to the early 1990s while studying at the Hochschule der Kënste in Berlin, Germany, so they are not really examples of his fully formed character as an artist.

They also do not really coincide with the predominant art modes at the time of their conception. Certainly in the South African art scene, conceptual and installation art was all the rage. So Kannemeyer's pseudo-abstract paintings, which strongly echo the work of Francis Bacon, the British painter best known for his triptych, Three Studies for Figures at the Base of a Crucifixion (1944), would not have found favour. Plainly speaking, Kannemeyer's art was a bit out of sync with what his generation was producing.

Kannemeyer eventually settled on an idiom that suited his expression and made a name for himself in macabre illustration with a socio-political flavour when he began contributing to Bitterkomix and then later established Zombie, a so-called absurdist magazine that, like Bittercomix, appropriated comic book expression. Nevertheless this series of bold paintings from the 1990s allow us to trace the genesis of his artistic trajectory and thus offer us an opportunity to identify the fundamental elements that have been driving his aesthetic. The anger and cynicism that one associates with his illustrative works are present in these paintings.

They simply manifest in different ways - not just the striking colour palette and the energetic and loose strokes but the atomised anthropomorphic forms conjure a violent force that is causing a fracture in the self. It is with nihilistic fever that he paints. So while this mode of expression appears quite disconnected from the art we now associate him with, the sentiment has remained constant. At some point, he found ways to channel his intellectual spirit into a more stylised and contained form of expression. The wounded or deformed animal, with tubes coming out from its body, is a recurring motif in these paintings. Could this be a self-portrait? Other more figurative works of his apartment in Berlin show industrial pipes lining the exterior of the building. It also could be a reference to the interface between nature and culture. One also can't help thinking about the figure of the dog in JM Coetzee's Disgrace, which served as a metaphor for humiliation and a lack of agency.

Text displayed on the wall near Ballen's artworks suggest that the true nature of his work has largely been missed by viewers - largely South African viewers, according to Gavin Rooke, owner of Rooke Gallery, who says that Ballen's latest show at New York's famous Gagasonian gallery was an instant hit. So obviously, this collection of unseen and "vintage" photographs is intended to redirect our attention to an aspect of Ballen's work, in particular its formal character, that has thus far been overlooked. Undoubtedly, Ballen has been miscast by South Africans for the simple fact that much of his early documentary-style work touched a nerve with locals, particularly white locals, who didn't take to keenly to seeing the underbelly of white culture paraded in art galleries.

Arguments against his work revolved on the seemingly uncomfortable relationship Ballen had with his subjects: that he had taken advantage, that his subjects weren't able to be cognisant with the way in which he was framing his images. Interestingly, these critics have no problem with manner in which other photographers portray impoverished black subjects, nor do they question the power relations in this context. Thus Ballen's critics have employed double-standards, which are more revealing of their inherent prejudice. What this small exhibition of Ballen's early photographs establishes is that he was always searching for compositions that destabilised the truth that photography was meant to offer. Ballen hunted down unusual or off-beat instances, which appeared not to be derived from reality but the imagination.

The tension between the two are fundamental to his aesthetic. In Portrait of My Leg, Zoo Lake Swimming Pool, Johannesburg (1975), a disembodied leg awkwardly protrudes from the corner of the photograph, it is the leg of the observer, Ballen. The leg announces his presence as well as his attempt to negotiate that presence - this is partly what photography is about: coming to terms with one's subjectivity. This obviously relates to all media but is more apparent in photography because the image is physically rooted in the exact moment of looking. With just one of Ballen's legs in view, we are confronted with an image that feels off-kilter. From a formal point of view, the image is thoughtfully balanced: a man is pictured sunning himself on the top left-hand corner, while Ballen's leg is placed bottom right. Nevertheless while Ballen follows this most basic traditional visual rule, it remains an unsettling image. Ballen seeks out these inharmonious arrangements. He is keen to identify the elements that perturb not only the seeing eye but the inner eye and the relationship between those two. - publsihed in The Sunday Independent, 29 November, 2009.