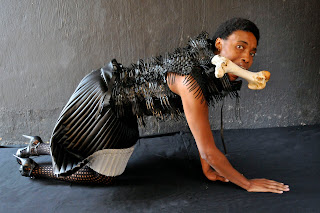 If you miss seeing a performance art piece it is incredibly difficult to retrieve the full experience, its visceral character. Such was the lesson I learnt last week when I attended Rites of Fealty/Rites of Passage at the Bag Factory, where photographs from that one-night performance art event that was staged at the venue last year went on exhibit. Having missed what has become in art circles a bit of a legendary affair, I was eager to somehow recover or reclaim the experience through the photographs and video footage on display.

Rites of Fealty/Rites of Passage was a one-night event spearheaded by Johan Thom, a recognised performance artist, which presented some of the rising talents in this fairly marginalised branch of the visual arts, such as Bronwyn Lace, Mlu Zondi, who has since gone on to scoop the Standard Bank Young Artist Award for Dance, Anthea Moys, who won the Everard Read Brait Award this year, Ismail Farouk and Murray Turpin, Rat Western and Dinkies Sithole. Unfortunately the only traces left from this renowned performance art extravaganza are a series of 10 photographs taken by John Hodgkiss and video footage, which was screened on a PC monitor. Hodgkiss has become a vital witness to performance art and the performative work of artists such as Mary Sibande and Moys, who were both reliant on his photographic eye for the execution of their solo exhibitions this year.

His role in the production of their work and other artists' products and the promotion of their work is often overlooked; he has very much become the silent witness and, at times, collaborator. Naturally he turns in the best results with a more stagnant form of performance, where the dress worn by the artist and or the setting become the active forms of the performance, such as when Sibande posed in costume in a studio setting. His documentation of Rites of Fealty/Rites of Passage feels partial, incomplete. It is clear that the evening comprised dynamic performances; Lace is seen hitting a ping pong ball with a bat that appears to be attached to an intricate web of fishing gut in her piece entitled Deuce. And Moys moves between cycling on a bicycle and running among the audience, drumming up participants.

The photographs and video footage allow one to get a sense of what the performance pieces entailed, but between these two mediums something has been lost: the details and visceral character of the performances are absent. The fact that we have cameras attached to our cellphones and websites such as YouTube providing public platforms of expression have contributed to this heightened desire to document, but what this exhibition makes clear is that nothing can substitute actual experience. It is rewarding to be reminded of this fact: it keeps one aware that blogs, video clips and twitter messages are simply small fragments of the truth and most importantly that some art is so ephemeral that it cannot be owned, (re)packaged and (re)interpreted.


Fortunately, however, the producers of Venus, a performance art show that is packaged under more public-friendly terms as "theatre" and "dance", are not out to create a short-lived art product and have brought this remarkable production onto Joburg stages. The production is made up of two performances: Sakhozi says 'non' to the Venus and They look at Me. For those like me, who missed the latter's 2006 debut at the FNB Dance Umbrella, its short run at the Market Theatre has been a stroke of luck. This is an outstanding performance piece and an unusual one because the costumes or clothing, created by Strangelove, is more than an accompaniment but the star of the performance: a vital expressive feature that articulates the central themes.

In They Look at Me Nelisiwe Xaba, the performer/choreographer, wears what could be described as a dual outfit; one is a see-through period dress made from what appears to be a durable fabric used in the manufacture of tents or parachutes (implying the garment is a survival mechanism) that is given a grand silhouette by a crinoline, a steel structure that was used in women's fashion in the 1800's. Her other contrasting outfit, which is worn under this modern take on period costume, is a garish ensemble of bright stockings, a bikini bottom and white high heels that speak of a more sexually liberated persona than expressed through the repressive and immuring features of the period dress.

Thus the historical Madonna/prostitute dichotomy is conjured in this extraordinary outfit. The see-through period dress undergoes some fantastic transformations during the performance - in one scene the crinoline skirt becomes a screen on to which an animated film is projected. This directly speaks of clothing's function: to transform the body and in the arena of fashion, to remould the body into the prevailing ideal. It also directs attention to the manner in which ideas about femininity and beauty are projected onto clothing. Thus the outfit comes equipped with an inflatable bust and bustle that adds considerable dimensions to the chest and buttocks: the two sexualised areas of the female form.

Both performance pieces engage with the history of Saartjie Baartman and in this work Xaba and director, Carlo Gibson, wrestle with the pervasiveness of the European ideal of beauty and how it shapes Africans' concept of self - this is perhaps best articulated through the animations depicting young black women in a hair salon, who aspire to hairdos that conform with Western conventions. In this way Xaba and Gibson create a link between Baartman and present-day preoccupations with conforming to a (fashionable) ideal.

The modernised crinoline dress demonstrates how the wearer carries the "weight of the past" that she is trapped by historical constructs delineating femininity and beauty.

From a contemporary point of view this period-style dress looks ridiculous and absurd but there are moments when Xaba appears to derive comfort and pleasure from her outfit. She becomes transfixed by its form, its sensual qualities, thus women's clothing isn't just designed to seduce the male gaze but the wearer too.

In such instances Xaba engages in a playful activity with the dress, falling down on to the ground into the dress, allowing the skirt to gently billow around her head. In these moments the dress provides her with a sanctuary, it allows her to withdraw into herself and releases her from the world around her. The many guises that this dress evolves into, therefore, are like a variety of "skins" or exteriors that she parades, that obscure her authentic self. During the performance we never penetrate to that place: as she lifts back one layer, we are presented with another one, another socially constructed fa231ade that creates distance, a distance that forges a gulf that she herself is unable to bridge. - published in The Sunday Independent, December 6, 2009.