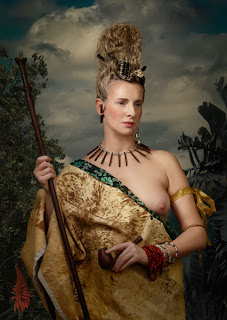 I have been admiring Andrew Putter’s African Hospitality series from afar. A couple of blogs ago I introduced a work from this series in a discussion on Alexis Preller’s retrospective, where I observed a connection between curator Karel Nel’s emphasis on the fact that Preller’s Africanised idiom was rooted in his desire to connect with an African identity.   But in retrospect I think it was a disservice to Putter’s work, which I am aching to write about independently.  I have this last week been compiling my annual list of the top exhibitions of the year for The Sunday Independent: ordinarily I kind of scoff at list-making for the simple fact that it is often used to underscore the status of the list-maker rather than the folk or works that appear on said list. But I find it a useful exercise for two reasons: 1) I almost always write a preamble undermining the authority of the art critic so as to remind myself and my readers that my opinions are just that, opinions.
2) It forces me to isolate those features or characteristics that excite me about art.
Regarding the latter; I have come to observe that those artworks or exhibitions that compel me to write tend to be the ones that stand out for me. Such shows keep me awake at night as I begin to unpack them in my mind and even after my review has gone to the press I am still pondering the work.
I haven’t actually got to see any of Putter’s African Hospitality series in person – it showed at Michael Stevenson in Cape Town – but I have a review of his work taking form in my mind. I must check with David (Brodie) whether he is bringing this show to Joburg – that is the one bonus of the Brodie/Stevenson alliance: we get to see Stevenson’s Cape Town shows.
I am not going to deliver my full review of Putter’s exhibition here (it would require a face-to-face encounter) but I will say this: they bring to mind the highly-stylised work of the (in)famous French graphic design/photography duo, Pierre et Gilles, whose work partly enabled my transition from the world of fashion into art. Of course, Putter is employing this mode of expression to achieve quite a different end – albeit it one that summons a kind of traditional portraiture that Pierre et Gilles similarly sought to appropriate and subvert. But the real power of this series of Putter’s is its ability to conjure a number of pertinent discourses; from ethnographic photography and painting (think Thomas Baines) and its relationship to the colonial project, (yes, an overly exhausted topic but I think Putter revives our interest in it) to the white identity and the politics  attached to whites asserting their connection to Africa. At the same time I am particularly excited by the relationship between these works and those of Mary Sibande, Athi Patra Ruga and some of Nandipha Mntambo’s art, who all manipulate identity with the aid of props – clothing.

Posted by Mary Corrigall at 6:43 AM

thank you for engaging with my work! andrew