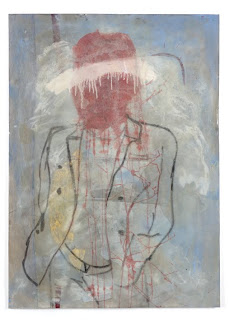 AS IF we were in any doubt, Moshekwa Langa has once again confirmed that he is the master of ambiguity. In his characteristic fashion, he has left all the work in Thresholds untitled. It is a strategy that he has employed since the beginning of his career, when he exhibited at the now defunct Rembrandt van Rijn Gallery at the Market Theatre in 1995. Back then, his scheme to keep the meaning of his works open-ended somewhat backfired as critics and art theorists from here and abroad interpreted his works in a manner that fulfilled their own agenda to identify a progressive black South African artist. He was summarily classified as a neo-conceptualist and thus the first black contemporary South African artist - the former designation enabled the second.
Clive Kellner, former director of the Johannesburg Gallery, confidently declared after that solo exhibition: "Langa provides the sense of a future, where aspiration can be granted at the end of the proverbial yellow brick road.
"By mimicking Langa's success, albeit in his shadow, we are all offered the opportunity to be part of what is coming, as Langa epitomises everything that the establishment has been seeking - he is a young, black, conceptually based artist."

The weight of these expectations weren't lost on Langa: it set him on a trajectory engineered to either evade the question of his race and origins in relation to his work, or to critically challenge such narrow interpretative rhetoric. In this exhibition, Langa has adopted a diverse array of art-making methodologies, from scripto-visual forms associated with conceptualism, collage to documentary photography, to abstract expressionist works with cotton threads, to minimalist and semi-figurative painting styles. This is proof of his continued efforts to resist being pigeonholed. Of course, today you no longer expect artists to employ a single idiom or even medium, but these multifarious artworks do not parade as a cohesive body of work .


At least, superficially and at first, there appears to be no relationship between, say, his mapping text works, paintings with words contained in bubbles, his semi-figurative portraits and his documentary photography or video artworks that record traditional African ceremonies and dress. If one was no wiser, one could easily mistake Langa's solo exhibition to be a group show, displaying the work of a number of different artists each with their own visual and thematic signatures. This presents the viewer, and particularly the art critic, with quite an exciting, albeit it destabilising or disconcerting, challenge. Langa thwarts our innate compulsion to create order, to establish connections between his works and therefore to arrive at any decisive or finite conclusions - not just about him as an artist but this body of work.

In choosing not to title these works, Langa engenders an interesting paradox: although the works are superficially distinguishable because we have no name to differentiate them, they automatically become one and the same. And in a sense they are. For not only are they are all the products of Langa's conscious and subconscious creative and interpretative impulses, but collectively they allude to the artist's recognition of the limitations of a single sign system as a means of communication.

When Langa first started to make art, he suggested that he turned to a visual idiom because he found the written word insufficient.
"Every time I thought I had encapsulated in words everything that could have influenced me, there was something just hanging on the outskirts of what I wanted to say," he observed.

Not that Langa is looking to express a single message or in fact any specific message with these works. Rather, it is each medium that drives a meta-message, coinciding with that ever popular dictum "the medium is the message".
Langa does tamper with each language that he assumes: he uses coloured masking tape in a minimalist painting and he conjures abstract expressionist painting with threads instead of paint. But you are left with the distinct impression that subverting these modernist idioms or any visual vocabulary is not his primary concern. Rather, you sense that Langa simply slips into each idiom as if it is an independent receptacle, inhabiting it quite fully so as to simply reverse and challenge his status as a passive "receiver". He is like a chameleon, slipping under the skin of each idiom he assumes.

This concept is perhaps best demonstrated with his use of the documentary photography genre, resulting in a collection of almost ethnographical photographs of people who have partook in traditional African ceremonies. This particular genre of photography and this kind of subject matter is one of the most contentious forms on this continent, usually performed by a European outsider with the express idea of making distinctions between the civilised self and the barbaric other. Because Langa has been settled in Europe for more than a decade, he is both the outsider and insider - particularly in the case of the photographs of people from his hometown, Backenberg.

In the press release for the exhibition, it is suggested that Langa was intimidated by traditional rituals as a child. In this way, he always has been an observer of traditional practices rather than a participant. This fact shatters all those theories that came out in the late 1990s that Langa stood at the threshold between tradition and modernity. Certainly, the video footage of a funeral service and all the mourning rituals suggest that the boundaries between the two are completely blurred in any case: a mourning ceremony that plays out in a graveyard implies that African and Western traditions have been fused.

Langa is personally implicated in these works in a variety of ways: not only is he trying to perhaps negotiate his relationship to South African culture, but in his personal life he has been confronted with a devastating loss.
This is an about-turn for the artist: he has worked hard at distancing his persona from his practice. That he now feels free to lay parts of himself bare suggests that he no longer sees the baggage from our past as clouding our perception of his work.
Let's hope he is right. - published in The Sunday Independent, 13 December, 2009