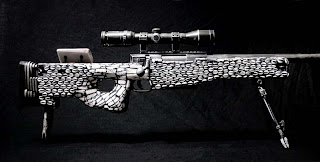 At a swish award ceremony held last night in Joburg  Michael MacGarry (or is it McGarry?) walked off with the 2010 Standard Bank Young Artist Award for the Visual Arts. It was a good choice: his solo at Brodie/Stevenson last year, titled When enough people start saying the same thing, was strong.  There were a few pieces I would have snapped up at the exhibition if I had had a bit of loose jink in my pocket such as any of the images from his African Archetypes series. I also had a weakness for the Fetish series (the image above is part of the series). But I think most importantly the work he created for the MTN Young Contemporaries (which came before the solo)  really stood out among the other finalists exhibitions: I particularly loved his Tipp Ex Politics, which consisted of white 'blobby' sculptures that resembled big piles of dung but actually represented six apartheid leaders (Malan, Verwoerd et al). They were all identical, implying that they were end-products of the same ‘mould’. MacGarry was robbed of that award; in my mind he was the clear winner but it ended up going to Dineo Bopape. So I am glad to see that he has been recognised and, in fact, this award has more kudos than the MTN Contemporary Award.  MacGarry’s work will get to tour the country after opening at the National Arts festival in Grahamstown. One can only hope, however, that they give him a better venue than the one that Nicholas Hlobo was stuck with this year, which was a small, damp, pokey office at the back of The Monument. In any case he will get to show at The Standard Bank Gallery in Joburg, which is a grand venue. I look forward to seeing what he creates for the shows. MacGarry wasn't his usual cynical cocky-self last night: could the award have softened his disaffected persona? During his acceptance speech, which followed after a slightly cringy video starring MacGarry wearing one of his "All Theory no Practice" T-shirts (no doubt done with his tongue firmly in his cheek), he thanked his fellow Avant Car Guarders, Zander Blom and Jan-Henri Booyens, but he also drew attention to David Brodie’s valuable assistance in steering his work away from its purely theoretical, slightly solipsistic drive. Some guests thought that with his anti-establishment stance that MacGarry would turn down the award: as if – this is his first big award. No one is that anti-establishment.