Putter and Preller, who would have thought it? 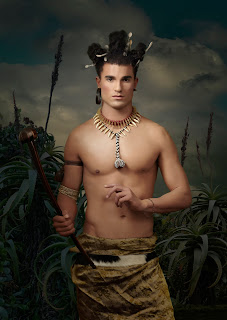 When I saw this image of Andrew Putter’s, entitled Joao the Portuguese from his recent African Hospitality series, I immediately thought of Alexis Preller and his latest retrospective now showing at the Standard Bank Gallery in Joburg. Putter and Preller have almost zip in common but for me this photograph quite succinctly articulates Preller’s superficial desire to connect with Africanness. Or at least curator Karel Nel believes that Preller’s art is a manifestation of a compulsion to claim his African identity. Here is a review I wrote of Preller’s exhibition, which might better bring to light the relationship I see between the exhibition and Putter’s wry image, which actually also makes me think of Johnny Clegg and that famous cross-cultural band Evoid.

ALEXIS Preller's art was due for a re-reading. Or so asserts Clive Kellner in the new box set published to coincide with this retrospective - the last was staged in 1972. Pegged as sharing close ties with the Symbolism, Surrealism and other western art movements it is suggested that Preller's art should no longer be viewed through a Modernist (European) lens.Kellner and Karel Nel, co-author of the book and curator of the exhibition, furthermore suggest that, if anything, Preller was a "pre-postmodernist" because he forged a unique vernacular that rallied against "dominant colonial orthodoxy".

It all sounds good and in their text Kellner and Nel make a fairly good case, using terms such as "appropriated" and quoting from the likes of Rasheed Araeen, the recalcitrant English artist and writer who has made a habit of challenging western hegemony. But, unfortunately, Preller's paintings tell another story. One that, regrettably, appears to confirm a primitivist impulse at work. In other words there isn't too much difference between his outlook and that of Modernists, such as Pablo Picasso, who also took their cue from African culture. Without a doubt Preller's motives for employing an African idiom diverged quite considerably from European Modernists, who were mainly interested in the formal qualities implicit in African cultural products - and, of course, their own projections of what African culture embodied.

Preller's art also evidences a fixation with the stylistic character of African art and culture but it is suggested that, for him, it provided the means with which to identify himself with an African identity - Nel's case hinges on this fact. Of course, this urge only manifested after visiting the Musée de l'Homme (Museum of Man) in Paris where Picasso also uncovered the "spirit" of Africa. Ultimately, though, what really counts is what Preller's idea of what that African identity constituted and how he translated that into his art. Without a doubt Preller developed an African-inspired aesthetic that drew from the European canon but (re)worked the African elements in quite a different manner. His vocabulary is the result of an amalgamation of visual references drawn from a variety of ethnicities or cultures on the continent. It is this aspect, perhaps, which has led Nel and Kellner to suggest that Preller might have been a forerunner to the post-modern movement; with a stretch one could think of it as a syncretic language that collapses time and space - iconography from Ancient Egyptian, Greek and traditional African dress are melded into a singular expressive form. Of course, Preller doesn't do so with any level of irony or self-reflexivity.

With works such as The Kraal II (1948), which shows an array of different African cultures shown to be inhabiting a rural village, one is left with the impression that Preller perceived African expression to be underpinned by a unifying theme, that there was an essence which intrinsically connects all African cultures. This essence that Preller sought to describe or seek out isn't predicated on any definable features but rather an intangible "mystique". In this way his art positions the African as an unknowable and thus exotic other. This painting is a good example of his brand of magical realism, in which a figurative image is infused with fantasy elements such as a drum that is balanced on the back of a mythical creature. A group of miniature people dance on the drum's surface around a large candle. The fantasy features allow Preller to give physical expression to the mythical nature of African cultural practices. It is hard to reconcile this idealised image of black people living in harmony in a rural idyll with what was happening in South Africa in 1948 - when apartheid policies were installed as law - when the painting was completed. Preller appears to have chosen to bury himself - and his viewers - in a fantastical vision of Africa drawn from the past or the imagination rather than face reality. It is within an imagined idea of Africa that he tries to locate his identity so whatever connection he forged couldn't have felt authentic. His motives may have been genuine but his method was superficial. Like Picasso et al his art does not evince a heightened interest in African culture per se but rather its external visual manifestations, such as the design and form of African sculpture, dress and patterned fabrics. But he subverts his sources, imbuing designs and patterns of his own making into the African dress of his subjects, consequently claiming ownership of their culture.

But perhaps the most bothersome aspect of his art is the manner in which the object/subject collapse into each other, demonstrating the manner in which he objectified his African subjects. Almost all his subjects parade a rigid deportment but it is only when one views Adam and Eve (1955), which features two large wooden effigies which are seated on a stool supported by a series of smaller wooden figurines, that it becomes obvious that mostly Preller's African subjects are modelled on statues and not real-life subjects. It is easy to understand why Nel and Kellner have tried to reframe Preller's art: if he isn't a pre-postmodernist, his status within South Africa's art canon remains problematic. - published in The Sunday Independent, 15 November, 2009.