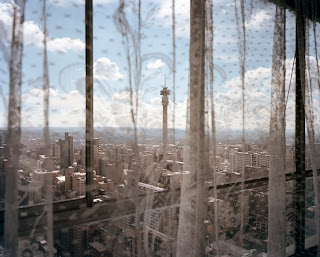 Initially I had planned on doing a straight review of Subotsky and Waterman's two part exhibition that was showing at The Goodman Gallery in Joburg and their Project Gallery at Arts on Main. My editor was on the lookout for a feature story and I wasn't going to pass up the opportunity to write a feature on the Ponte, the main focus of their exhibition at the Goodman on Jan Smuts Avenue. I have been writing about the regeneration of Joburg for years; it's an ongoing project that has thrown up an endless range of juicy angles. I felt almost immediately that Subotzky and Waterhouse's images articulated some of the themes that I have been writing about, especially one of my latest features on the Mythologizing of Joburg, where I attempted to unpack the myths surrounding Joburg’s inner city. Nevertheless had I simply reviewed their exhibition I would have come off feeling slightly underwhelmed; as thrilling as it is to see work that relates to my own, it is slightly disappointing: I want to be confronted with images that surprise and challenge me. This two part exhibition did neither, especially the second part at Arts on Main, which focussed on Subotzky’s interest in the crime phenomenon: another topic that I have mined from hard news pieces, to softer more abstract investigations. I wanted more from this exhibition: I wanted it to offer more than a journalistic analysis- perhaps the documentary genre isn’t up to the job?
This is my feature on the Ponte and Subotzky and Waterhouse's survey of this Jozi landmark:


AT FIRST it was simply a symbol of architectural innovation. With its cylindrical construction and hollow inner core that would allow natural light to flood the apartments, Ponte, or Ponte City as it was called, was envisioned to be an ingenious architectural wonder that would not only be visibly intriguing but would alleviate some of the drawbacks inherent to conventional apartment blocks. But architect Rodney Grosskopff's vision was flawed. The building's cylindrical design meant that when strong gusts of wind circulated around the inner core it created an eerie hum. Sometimes the wind even sucked out glass windows. The extensive rubbish shoots, which ran the length of the 54-storey building didn't function properly, spewing rubbish into the inner core, according to a leading property developer. Some of the balconies proved inadequate for children and are rumoured to have caused at least one fatal accident. Consequently, the building quickly lost its cachet as a symbol of utopian urban living. And when the inner city's persona began to change from the late 1980s to the early 1990s, turning into what many perceived as a dystopian African city Ponte, which had fallen into a state of disrepair, became emblematic of the city's demise - and failed dreams.

To a certain degree Ponte lived up to its illustrious reputation; reports suggest that at its nadir five-storey high layers of debris filled its inner core, prostitutes and drug dealers operated out of the building and it became a popular site for suicide. In other words the Ponte was one's last pit-stop if one had given up on life altogether. Its proximity to Hillbrow - believed to be the apotheosis of Joburg's slide into iniquity and still considered a no-go area of Joburg - sealed its status. At one point it was reported that ANC Youth League had suggested that it be turned into a prison. Consequently people projected all their fears, anxieties and negative perceptions about Joburg on to Ponte and its character grew to mythological proportions. A base jumper once quipped that his jump off the Ponte tower wasn't half as terrifying as entering the building. Its status made it a popular source of interest for artists, writers and film-makers, with some exploiting and intensifying the myths surrounding the building and others choosing to confront and unpack those myths. No doubt British film-maker Danny Boyle, who is turning Norman Ohler's 2002 novel, Ponte City, into a fast-paced thriller will probably fall into the former category.

Stephen Hobbs's seminal 54 Storeys (1999), a video artwork consisting of footage captured by a camera thrown down the inner core of Ponte, is evidence of the latter. In presenting viewers with a view into Joburg's supposedly darkest reaches, it vacillates between conjuring and unpacking the myths attached to this landmark conurbation. The horror-filled journey that Hobbs captured forced viewers to face their worst fears; not only the physical act of suicide but plunging to the darkest depths of the inner core was tantamount to getting in touch with Joburg's supposed decayed, malevolent essence. In this way the artwork facilitated an exorcism of sorts. There is this sense that such a journey is vital for any Joburger wishing to "integrate" themselves with parts of the city that have been off limits to them and have kept them adrift from their home town, their identity. Confronting the Ponte and what it represents presents a way for many to reconcile themselves with what the city has been and is becoming.
It is in one of the final scenes in Neill Blomkamp's hit movie, District 9, that this iconic edifice comes into focus. The building's appearance isn't simply to root the film in its setting or to articulate the moral and physical decay of the city, but as one critic suggested, is also relates to Blomkamp's need to resolve the social and psychological baggage attached to his place of origin.

When photographer Mikhael Subtozky, who relocated from Cape Town to Joburg a couple of years ago, first visited the Ponte in 2008 - on the insistence of a friend who thought the building would be interesting for him to photograph - Subtozky wasn't keen. He was "put off by my feeling that the Ponte was a cliché and that almost every photographer I knew had taken the same shot looking up its core," wrote the artist in a statement issued for the exhibition - his recent resolve to not give interviews has forced him to formally issue his raison d'etre. After meeting and working with Patrick Waterhouse, a British artist, while on a residency in Italy, Subotzky's interest in the Ponte was ignited when the duo "conceptualised a project that would focus as much on the mythical presence of the building as on its physical space." The Ponte that Subotzky and Waterhouse encountered was one in a state of transition. Eight years earlier property developers, Trafalgar Property, had taken ownership of the building and were said to have committed R150 million to refurbishing it - almost as much as the building is said to have cost (R170m). A new dream for the Ponte had been born: one which would see the penthouse apartments at the top live up to their full potential and other lifestyle accoutrements such as shops, restaurants and a state-of-the-art gym were to be some of the new attractions. The only evidence Subtozky and Waterhouse found of the "New Ponte" - as the developers had dubbed their regeneration dream - was an image advertised on posters plastered on walls inside the building.
"The building was a shell, its bottom half completely empty, and the top half sparsely populated. Former residents moved out in a hurry to make way for the developers, often leaving behind personal possessions and documents. Many of their apartments were then burgled and trashed and months later, when the development had failed, we entered into room after room where the floors were covered in piles of broken possessions, torn photographs, and scattered paperwork," observed Subotzky.

Nevertheless it seems that in the course of their project the duo did witness the edifice's renewal. This is perhaps best documented in a photograph entitled Cleaning the Core, Ponte City, Johannesburg (2008), which succinctly captures the transitional and ambivalent nature of Ponte. One is able to read the building's grand dimensions - the human subjects in the image provide the scale. The Ponte might have seen better days but this photograph confirms it to be a visually compelling edifice, which has no doubt fuelled its mythological status. It is like the archetypal dilapidated old-period house that is thought to be haunted: everyone is terrified to take a peek inside but its exterior ignites curiosity. It is hard to think of the Ponte as decaying, from Subotzky and Waterhouse's image it appears impenetrable, yet the deep layers of debris and rubbish that fill the inner core and which workers are seen removing, create the illusion that this building has crumbled from the inside, that it has been gradually imploding. The debris resembles the concrete rubble left after a building has been demolished. It's a powerful metaphor for the inner city's degeneration and its regeneration - the sheer amount of debris which has to be removed before its regeneration can be realised implies that renewal is a gradual process. In a panoramic photograph which also depicts "cleaning the core", all the workers pose for the shot. This subtly shifts the dialogue in number of different areas; it draws attention to the hard, physical grind involved in remoulding a city but also to the labourers themselves. The labourers are an active part of the process of regeneration but are they excluded from its benefits? This goes to the heart of one of the most pertinent socio-political issues tied to Joburg's regeneration: who is it for?

Subotzky and Waterhouse's study of the Ponte extends beyond simply probing the edifice's metaphorical and physical character: they train their lenses on its current inhabitants, offering up a diverse series of portraits. Engendering close relationships with his subjects has been part of Subotzky's modus operandi - he has implied that it is as integral to his practice as the conceptualising and photographing process. Despite this not all the inhabitants were welcoming of Subotzky and Waterhouse's prying lenses; hence a large portion of the portraits are taken in the lift - the place where people are likely to encounter their neighbours. The shiny surface of the brushed steel interior of the lift lends an interesting quality to the portraits: its characterless veneer cuts them off from their context - they could be in any lift in any building, anywhere in the world. This sense of rootlessness works at undermining perceptions about the Ponte, where its physical context is thought to be attached to such fixed circumstances. Posing in a contraption that facilitates movement, Subotzky and Waterman enhance the reality: that these inhabitants are living in a fluctuating environment. The confrontational stares that most of their subjects parade somehow compel one to contemplate one's fascination with this building and our vicarious interest in their lives.

These portraits are juxtaposed with a series of more intimate scenes of life inside the Ponte, such as Untitled III, Ponte City, Johannesburg (2008), which shows a young girl entertaining herself while a woman, presumably her mother or a relative, cleans the kitchen. This image communicates youthful and naive exuberance, implying that life in this supposed illustrious building is no different to any other and that warmth, happiness and beauty is able to flourish here. An image showing a young couple taking a bath together, establishes a similar feeling but it also functions as a stark contrast to the public image that the people in the lift portraits portray. This juxtaposition creates an interesting interplay between the public and the private, which closely relates to the perceptions about Ponte: the tension between its mythologised character and its actual persona. Subotzky and Waterhouse don't offer a single perspective on Ponte; they allow its heterogeneity to come into focus. In this way the Ponte is like an old acquaintance that at times feels like a stranger and in other moments is predictable. - published in The Sunday Independent, November 22, 2009.
Posted by Mary Corrigall at 10:34 AM