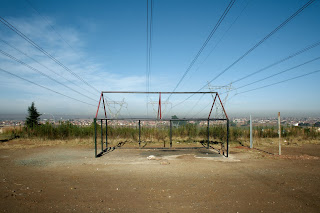 A couple of week's ago I attended the Market Photo Workshop's 20th birthday celebration. All of Jozi's hot-shot photographers - David Goldblatt (of course), Mikhael Subotsky and 'Lolo Veleko - were there to swig a bit of champers and commemorate this institution's anniversary. But among the crowd were unhappy staffers who confided in me about the problems that plague the workshop; organisational woes, big egos, limited funds and an inadequate curriculum. Not that it came as a surprise. The exhibition that was curated to mark the event was disappointing: their were a limited number of photographs that were blown-up too large for their own good, drawing attention to the photographers technical flaws. Here is the review that I wrote:

SHORT CHANGE, the exhibition curated to mark the Market Photo Workshop’s 20th anniversary, teeters between being a journalistic endeavour and a fine art exhibition, consequently embodying the dual outcomes that the institution attempts to achieve with its students, preparing them to enter both realms or to be able to grasp the nuanced, albeit sometimes elusive, distinctions that separate journalism and art. Some of its graduates have done so with aplomb; Zanele Muholi and Nontsikelelo ‘Lolo’ Veleko, for example, both started out in the social documentary genre but have been able to manipulate that language to create work that transcends its boundaries.

Other graduates have, even after years of exhibiting, struggled to compete with the conceptual photographic work that fine artists have been generating. Thus one can’t help feeling that this institution perhaps only offers a foundation of knowledge on which students must build. The curators of Short Change, John Fleetwood and Lester Adams, have tried to locate the work outside a purely journalistic realm, evidenced in their expressed desire to probe “change as a state rather than methodology or subject matter”.


It is hard to imagine how change manifests as a “methodology,” – perhaps employing different photographic techniques to reflect change? – nevertheless their impetus is to probe abstract or philosophical notions of what transformation entails. Their curatorial brief is an interesting and challenging one given that photography cannot show transformation in action but only isolate moments in that trajectory.

As a witness to reality, photography obviously also lends itself to more literal studies. Fleetwood and Lester have unfortunately not totally succeeded in their aim. With their lenses firmly trained on the dispossessed and the impoverished, most of the photographers have turned in predictable narratives that meditate on the lack of social change since 1994. It is the absence of change that they aim to describe. Puxley Makgatho presents a black and white image of a homeless woman living in the alleyway of a conurbation. Dennis Ramshiga offers a view into a semisqualid home where a poster of Mandela is displayed, echoing an allegiance to a party which has failed to deliver on its promises to the poor.

Simangele Kalisa shows two portraits of what appear to be men working at a rubbish dump or yard. These two men, who presumably live off the detritus of the rich, are self-conscious subjects. With their hands behind their backs and their gaze directed at the camera, their unease is palpable. This body of photographs, which is distinct from the other half of the exhibition, unwittingly evidences a predominant theme or subject-matter in South African photography since democracy, which displays heightened interest in the disenfranchised. The idea is to draw society’s attention to their plight, but it is one that has similarly fetishised poverty. Given the theme of this show, one can’t help feeling it would have been more suitable to have photographed the new wealthy elite.

One senses with the work of these students, which may well be true of all amateurs, that they are simply emulating the work of their predecessors rather than forging their own idiom. Rather curiously, the curators have chosen to display the photographs without titles or dates. The idea was that the works’ significance would be more closely tied to the theme – it was also suggested that the students struggled to title their works.

This approach presents an interesting curatorial experiment in terms of the viewer being forced to interpret the image without any textual clue to its significance or being able to contextualise it. It challenges the traditional way we read imagery, but particularly in the documentary genre, which is by its nature rooted to a time and place. It’s an interesting idea, but feels totally unsuited to a project which is predicated on probing transformation, where the dates of the photographs are obviously of key importance. The individual character of each work is also silenced. That the students struggle to title their works speaks of a lack of capacity to engage with the conceptual impetus of their image-making, which is worrying.

This is a disappointing exhibition and one that doesn’t feel representative of the best this institution has to offer. That said, there are a few striking images, such as one of Delwyn Versamy’s works, a photograph of a photograph that is party obscured as it is shown tucked underneath an office desk or machine. An ear bud is also lodged behind a strap attached to this mundane piece of furniture. Versamy questions the role photography plays in our everyday existence and how it is employed to maintain emotional ties. Why do we carry photographs of people we see every day? Khabazela Mkhize’s photograph of an empty structure resembling a makeshift home is formally exciting, with the lines of the post mirroring the vertical lines of the electricity cables that frame it. This profusion of lines segementalises the urban landscape, creating a sense of order and control. But without any cladding the structure has no purpose; it is dysfunctional. This has bearing on the theme of the show, where the goals of democracy have yet to be attained and where bureaucratic bungling has rendered our society dysfunctional. – published in The Sunday Independent, October 25, 2009.

Posted by Mary Corrigall at 7:17 AM