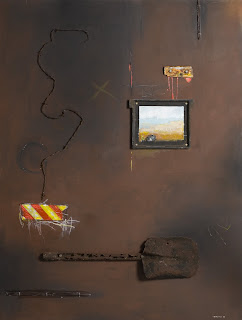 Kagiso Pat Mautloa has a penchant for old spades. He likes them worn, rusted and weather-beaten. To find spades at this phase of their life cycle, he pokes around in dumps. He also looks in people's yards in Alex. To persuade folk to part with their old gardening implements, he offers to replace them with new ones. Mostly, he draws puzzled looks. For those familiar with his art, it comes as no surprise: these objects that are embedded in his abstract paintings or are fashioned into sculptures are essential to his aesthetic, which articulates conceptual narratives centred on degradation, renewal and transcendence.
In the context of these themes, aged spades prove a useful leitmotif.
"They are man's tool for reconstruction," observes Mautloa, in his modest studio in the Bag Factory, a disused industrial space a stone's throw from the Oriental Plaza. There aren't any canvases in his studio. Apart from a poster advertising his solo exhibition at the Goodman Gallery last year, titled Other Presences, there aren't any indicators that this is the studio of a prominent artist. Papers, files and books cover his desk making his studio look more like an unkempt office than a place of creative contemplation.

Mautloa evinces an understated intelligence; perhaps, after decades of interest from the press, he is no longer in a rush to relay his artistic ethos. Now in his late fifties, a degree of nostalgia for his youth has set in. Not an overt sense of longing; nothing that Mautloa does is overstated. Even the socio-political subject-matter in his art is subtly addressed. Instead of depicting the dispossessed, he shows their tools of toil; the green-matted patina operating as a metaphor for the scars of time and the constant battle to survive.

Mautloa associates spades with hardship and toil, but he also associates these prosaic objects with his childhood. Back to a time when he used to roam the township looking for a "bob a job". (A "bob" was a shilling, then about 10 cents.) Now Mautloa only picks up a spade when it is no longer fit for any purpose. "I like to get them at that point because one can read the history from them."
He is intrigued that these mass produced objects take on individualised qualities as they age.
"We can all buy the same pair of shoes, but they take on a different look depending on how often each person wears them and how they walk in them."

His fixation with the life cycle of spades relates to his interest in the way humans respond to and are shaped by their environments.
"Nature is both gentle and harsh. When it wears you down, it wears you gently. We have lived through all kinds of temperatures and temperaments and conditions."
Mautloa first began to work with found objects in the early nineties around the time he worked on an exhibition curated by Ricky Burnett for Newtown Galleries. The found object, or should one say structure, was a tin shack. An authentic tin shack that he had acquired from a township dweller and displayed in its original form in the gallery. He even took the clumps of soil that were attached to the edges of the structure. Mautloa didn't want to replicate a shack.
"I liked the wear and tear and the rust and the ageing of the surface. On its own it is a statement."
People queued around the block of the gallery to view the shack. It was a time when whites had a growing curiosity about life on the other side of the tracks.
"We have always lived in parallel worlds. Black people had to have passes to come to the city and white people were too scared to go to the township. White people loved the black people who worked for them in their houses, but it never occurred to them to go and see where they stayed. I wanted to bring that culture into the gallery."

His most recent exhibition at the Resolution Gallery in Johannesburg, titled The Wealth of No Nations, which included the work of Godfried Donkor, the London-based Ghanaian, saw Mautloa take quite a different turn, dispensing with richly textured found objects and producing flat, two-dimensional prints. With these prints Mautloa turned his attention to slavery, after he read a story about the Henrietta Marie, a British ship that transported slaves during the 16th century, sank off the coast of Jamaica and is now the object of intense study. Mautloa was struck by the way the slaves were viewed as objects. The items that were used to keep the slaves shackled are now considered valuable collectables, leaving him with the sense that even in today's liberal climate the slaves' value as human beings remains elusive. Unlike usual depictions of the slave trade in popular culture, which are dominated by almost voyeuristic images of suffering, Mautloa chose to superimpose images of the ship over sepia stained maps.

Some images show a collaged image of crowds of people, which he has used in several other artworks. It is made up of images drawn from Africans over time and from different locales. It shows how the slave trade's impact echoed through generations, instilling this sense of servitude and worthlessness.
"About 17 million were shipped across to America. They were dislocated from their homes. What America is today is because of all those people."
Mautloa views the slave trade as the beginning of globalisation. Consequently, these prints articulate the unequal balance of power that persists between the North and South, the West and Africa.

Using incidents in history as the prism through which to engage with the present is a strategy that Mautloa first employed when he was studying at Rorke's Drift art centre, formally known as the Evangelical Lutheran Church Art Centre, in rural KwaZulu-Natal. In a print that he produced to mark the centenary of the Rorke's Drift Battle in 1979, he depicted the violent battle between the English officers and the Zulus at Buffalo River, but his intention was to mirror the bloody scenes he had witnessed in Joburg during the 1976 Soweto riots.

"What I discovered was that the shaping of history always happens through fighting and bloodshed."
Mautloa says he began to find his voice as an artist at Rorke's Drift. He was profoundly influenced by some of the great artists who had studied there, such as Azaria Mbatha and John Muafangejo. When he eventually settled on an aesthetic of his own, he found his life purpose. "Art liberated me in the sense of being able to say things in a pictorial form - one can use a single, small image to express an array of things."

When he left Rorke's Drift, he worked as a graphic designer for OK Bazaars before landing a job at the SABC, where he created logos and painted scenery. Though this diverted his attention from his art, it proved enriching.
"Working at the SABC helped me to deal with creating large-scale works. I never thought I would be able to do a 3 metre painting."
Only when he joined the legendary Thupelo workshops in the mid-'80s did he feel inspired to "revisit my original vision to be a fine artist".
Thupelo workshops encouraged black artists to embrace an abstract art idiom. "At the time, most of the older artists were into stylised figuration, which then became known as 'township art'. The workshop liberated me from that stereotype."
The first exhibition to show off results from the Thupelo workshop was not well received. At the time, people associated abstraction with Jackson Pollack, the famous American abstract expressionist. "They thought abstraction wasn't right for black artists, that we were just emulating what he was doing."
Mautloa was inspired by Pollack.
"The whole thing was about the adventure on the surface, taking the risks, challenging yourself and gauging how far you should go and when to stop."
He adapted Pollack's approach to meet his own ends.
"Political concerns remained with me because they're part of my history. People were so hoodwinked that they didn't think abstraction could capture a time and place. With colour, you can still capture a mood or violence."
He continues to work viscerally, revelling in the "the action from the strokes of the palette knife."
But he is now less concerned with using art to make a statement.

"When I started painting and developed my own way of making a line, people were entertained. I want to go back to that - just be joyful about the talent I have." - published in The Sunday Indepedent, 18 October, 2009.

Posted by Mary Corrigall at 8:30 AM