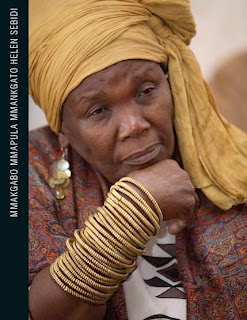 A flurry of new art books have been released recently; The Alexis Preller box set penned by Karel Nel and Esme Berman and, of course, Sue Williamson's book on contemporary South African art. I have recently finnished reviewing the Preller retrospective, now showing at the Standard Bank Gallery, and have been a bit dissapointed by the book, which lacks a level of objective criticality that Preller's art demands. Such was the case with the new Taxi art book on Helen Sebidi too. Perhaps it is just my allegiance to the journalistic realm but art writing in this country really lacks objectivity; authors seem to have this tendency to 'fall in love' with their subjectmatter to the point that they are willing to suppress all the uneasy truths or antinomies that their work presents. Such was the case with this book on Sebidi where the authors  were more concerned with how they represented Sebidi than actually engaging critically with her work and her status within the South African canon. It was a frustrating read, which so far has been the case with the box set on Preller. I haven't even glanced at the Williamson book yet, I really hope it is going to have a bit more meat on it than her last books, which felt like address books with their  A-Z format. Reviews of the latter and the Preller box set will follow. For now here is my review of the Sebidi book:

Mmakgabo Mmapula Mmankgato Helen Sebidi has been forgotten. In the last decade the focus has been on black male artists. For this reason alone this book, the 14th title in the Taxi Art Book series, presents a significant shift in the historiography of South African contemporary art. Its value also lies in the fact that Juliette Leeb-du Toit, the author, and the editor, Browyn Law-Viljoen, have made concerted efforts to revise the manner in which Sebidi's work has been read by historians and critics until now, who have
situated her art within stereotypical, and often pejorative, discourses that have delineated art produced by black artists. These, as Du Toit observes, have tended to "obscure the many rich and complex" responses Africans have had to modernity.


Of course, it does help that Sebidi's idiosyncratic brand of art - in particular the distinctive idiom that she arrived at in the mid 1980s - doesn't squarely fall into any of the stereotypical categories or any particular art movement. Sebidi's art-making process begins with drip style painting a la the abstract expressionists of Jackson Pollock's era. This fact, as well as the time Sebidi spent at the Johannesburg Art Foundation and the Thupelo workshops during the mid 1980s, where artists were encouraged to produce abstract art, seems to have given Du Toit license to foreground Sebidi's connection with the abstract modernist art movement in South Africa.


But this doesn't address the other influences in her art such as the surrealistic impulses and the pointillist technique she employs in her painting style and the bright colour palette, which both summon the art of Georges-Pierre Seurat, the neo-impressionist French painter. Adding to this, her work references traditional African cultural practices. These diverse characteristics of Sebidi's art make her a tough subject for any art historian: her work cannot be easily contextualised. Du Toit settled on taking her cue from the artist, who appears to have drawn the author's attention to the psychological and spiritual dimensions of her work. Applying psychoanalytic theory in her interpretation of Sebidi's work, Du Toit has implied that the work has functioned as a vehicle for self-affirmation and catharsis in the context of living through the trauma of apartheid.

There is value in this interpretation but it is a limited prism through which to interpret Sebidi's fascinating oeuvre and one which shifts attention towards Sebidi the person rather than her creative output. Consequently, Sebidi becomes the subject rather than her art. In fact, very little attention has been paid to the formal qualities of her art. While this may well be a Western approach to art criticism, considering Sebidi's affinity with modernism, which is an analytical engagement with form, it seems short-sighted to have avoided doing so. It also means that Du Toit risks slipping into old patterns, where the black artist's socio-political context predetermines interpretation.

For example: Du Toit suggests Sebidi's highly stylised and idealistic renderings of traditional rural life "reflect a nostalgic utopia that .... prefigures a future that would challenge segregationist policies".
In other words, even though Sebidi does not in any way depict the social effects of apartheid ideology, Du Toit believes it indirectly challenged that system. It is also more likely that these idealised renderings of rural life are manifestations of a nostalgia for a past before traditional life was disrupted by apartheid or even colonial rule.

It is not to say that there is no validity to Du Toit's claims; it is her unwillingness to entertain other interpretations that is irksome. Some might even suggest that Sebidi's fixation with depicting traditional customs in idealised rural settings might be evidence of the manner in which the artist's work satisfies a primitivist impulse and that, perhaps, she created art that pandered to a white market.

These realities shouldn't be absent simply because we want to honour the artist's practice. Over-sensitivity about the past shouldn't overshadow such projects either. Just because black artists were once defined by their ethnicity shouldn't prevent historians from probing their ethnic affiliations. Especially in the case of Sebidi, whose reverence for traditional cultural practices and philosophies is reflected in the content of her work.

One can't help but feel that even a perfunctory examination of Tswana culture might have enriched our understanding of Sebidi's art and the reoccurring motifs in her work. This would not have detracted from its modernist impulses and status. - published in The Sunday Independent, 20 September, 2009.