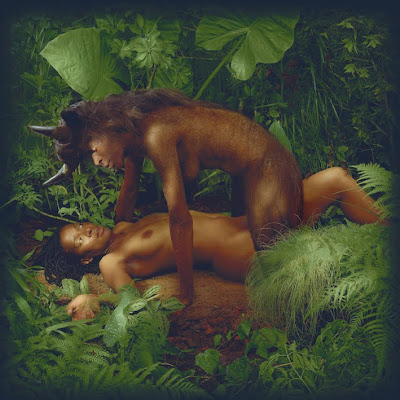 Women-themed cultural products seem to dominate the cultural scene in August, to tie in with a public holiday created in their honour.
It can be daunting for a member of the fairer sex to be inundated with representations of the self, but above and beyond that most of these products and shows tend to be highly contrived. Too often cultural products with an intended social objective feel overly simplistic and didactic. In the context of art exhibitions centred on gendered tropes, the ideological dimensions implicit in some of the artworks that transcend the gender slant also become muted.

Excessive attention is drawn to the artist's gender, creating the impression that their oeuvre or aesthetic is shaped by their identity. That may represent the approach of some, but it is not the case for all female artists.

A surplus of women-themed exhibitions - in Joburg there are at least three - also contribute to the idea that such a thing as "women's art" exists. This is a precarious notion, one that ghettoises women's expression, relegating them again to the periphery. The post-modern age may well have "refined our awareness of difference," as French philosopher and literary theorist Jean-Francois Lyotard has observed, but surely such blatant and mostly obtuse exercises in asserting difference surely risk undermining the great strides that women have made in freeing themselves from the shackles of their gender?

It's a conundrum that African artists and curators who label their products African have also had to negotiate on international plaftorms. Nonetheless, there are ways and means of constructing gendered exhibitions in such a way as to avoid stumbling into the pitfalls that recovering one's place at the centre seems to entail.

Jeanine Howse and Amy Watson staged an excellent show at the Johannesburg Art Gallery in 2006 titled Women: photography and new media, in which they located the female identity outside of the physical self and, in so doing, allowed women to transcend the entity that has held them prisoner since time immemorial.

Three gendered exhibitions under way in Joburg are: Innovative Women: Ten Contemporary Black Women Artists, curated by Bongi Bengu, Face Her, curated by Ingrid Masondo and Rita Potenza, and Domestic, curated by Melissa Mboweni and Jackie McInnes. Each has a different angle on the theme. In Innovative Women, the emphasis, as the title suggests, is on black women who are perceived to be creating "innovative" and "contemporary" work. The fact that innovation is no longer the objective of so-called contemporary artists is perhaps a negligible detail. Of course, such a title neatly pigeonholes all the artists as black female artists and their art as a product of that identity, which does limits one's reading of their work.

Take Nadipha Mntambo's The Rape of Europa (2009), a highly stylised image which sees the artist posing as the defenceless and nubile Europa and her rapist Zeus (disguised as a bull). This work articulates themes and ideas that extend beyond her identity as a black female. In assuming the roles of both Europa and the bull, Mntambo subverts what could have been a dialogue between the self and the other into a discourse with the self and divergent aspects of the self. In this way, Mntambo is both aggressor and victim, male and female, coloniser and colonised. Given that she tries to shirk fixed notions of identity through this work, it seems ironic that it would find its way to an exhibition that pigeonholes her as a black woman. Mntambo also engages and challenges Western myths and how its pervasive influence shapes one's concept of self.

But clearly there are dimensions to this work that resonate with supposed "women's issues" as the The Rape of Europa is also showing at Domestic. Here, of course, the rape is the focus as it appears to directly articulate sexual violence. In the context of this exhibition, it presents a different take on violence against women. Because Mntambo is both victim and perpetrator of the rape, she is engaged in a self-destructive act. This is not to say that the photograph implies that women are willing victims of rape, but perhaps that they too readily assume the victim role and in the process become agents of their own destruction. This raises a more interesting perspective on the phenomenon of abuse - especially in the light of an exhibition that focuses on women as victims

Wouldn't studies of perpetrators be more interesting? The position of the perpetrator is so much more complex. It is easy to accept and represent victimhood. But predictably it is images of abused victims that are (again) offered up as a means to access and unpack this phenomenon. Jodi Bieber and Nadine Hutton's banal essays bring nothing new to the table and certainly in her usual fashion Bieber "revictimises" victims by offering up their wounded naked bodies for public consumption - as if such imagery in our image-saturated culture continues to evoke outrage. Bieber's heart is in the right place; she simply struggles to think outside the box. On the other hand, Penny George, Alison Kearney and Muholi (also on show at Innovative Women) have interpreted the theme in less didactic and literal ways.

Muholi's photographs of blood, taken either appearing from a woman's body in the privacy of her home or smeared on bits of rubbish strewn in the street, create such a wonderful interplay between private and public forms of violence against women. Referring to both the blood that leaves a woman's body during her period and bleeding as the residue of a violent attack, Muholi cunningly blurs the distinction between natural and unnatural phenomena.

Face Her is probably the least engaging of the three exhibitions, but it is primarily an exhibition of work by young students and graduates from the Market Photo Workshop. This institution makes a huge contribution to the development of photography in this country, providing young photographers with the tools and a platform to express themselves. Nevertheless most of the photographers involved in this exhibition will struggle to compete with fine artists employing the photographic medium. Many of these photographers are churning out mediocre social documentary genre-style work that is not particularly thrilling in a visual or ideological sense, evincing their lack of fine art training.

However, there are a few stars in this show, such as Babalwa Mtanga, whose party snapshot of young women imitating Sophiatown style evokes an interesting dialogue on our society's idealisation of the past. Simanglele Kalisa's Fafi series is also striking, as is Musa Nxumalo's Black 182. The latter image captures the energy of young contemporary women. With short hair, an aggressive expression, and pictured leaping in the air, Nxumalo's subject articulates an antagonistic and confrontational attitude. In some ways Nxumalo's work recalls Lolo Veleko's street photography, but here the subject's outlook is expressed through her physical gestures and not just her dress. One senses that her anger and arrogance mask her fear and frustration. But she denies her vulnerability, and thus her femininity. Even more than that, she challenges her position in society. As she punches the air with her body, it's as if she is trying to break out of the township setting in which she is intrinsically rooted. - published in The Sunday Independent, August 23, 2009.
Posted by Mary Corrigall at 10:44 AM