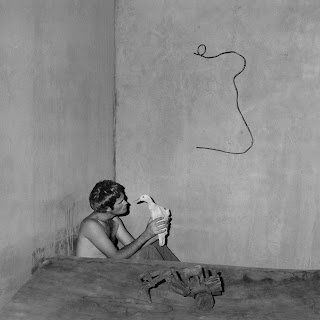 At first his new body of work appears to be classic Roger Ballen. With a monochrome palette and a grainy visual texture, Ballen conjures twisted, tortured, uninhabitable realms in his photographs. The walls are grimy and stained, the furniture, torn and soiled.

In Scavenging (2004) what appears to be a dead rabbit lies sprawled in front of a dilapidated dustbin. Out of one end a human leg protrudes, a half-naked young boy is seen placing his head inside the other end. Loops of barbed wire hang from the dark grey wall in the background.

Ballen's photographic works appear to summon worlds beyond reason, beyond human comfort, beyond comprehension and beyond human experience. It's as if Ballen is driving his viewers to the limit of psychological discomfort and physical uneasiness. He displaces the spectator. But his seemingly unfathomable compositions pique our curiosity and draw us in.

We are driven by a desire to unlock their meaning so that we can subvert their hold on us and relegate them to a place of comprehension where we hold the authority and not them.

While these images are obviously constructed, hinting that they are derived from the imagination, Ballen's mode of expression is such that they similarly remain rooted in reality too, thus he blurs the boundary between fact and fiction.

It's not just that the objects are familiar to us, some even promise comfort, like the tattered teddy bears, dolls and cute puppies and cats that populate his photographs, but his vocabulary or mode of narration, if one could call it that, recalls the classic social documentary style, hinting that these images are derived from reality and in a sense they are - the title of the exhibition alludes to a fixed place.

Because he shoots in black and white, his work recalls that canon of photography that is centred on probing human depravation, but his subject matter and the location of his work - a boarding house - both contribute towards what appears to be a study of existence at the fringes of society.

Ballen too has contributed to this canon with his earlier photographic essays on life at the edges of South African society. Here, however - and this is where this body of work extends his trajectory - he unpacks the significance and mechanics of that genre.

By obscuring their faces, Ballen shifts the focus from his human subjects to remove what has in fact always distracted viewers from his intentions - his photography has never been about probing the specifics of individuals but a phenomenon which binds them.

It is only in these deprived and uninhabitable spaces where the human mind and body is stripped of its psychological and physical crutches that Ballen believes that we are able to come in contact with the essence of human existence. Nevertheless Ballen, who displays such a sophisticated grasp of his craft, remains cognisant that photographs can only offer us illusionary truths, so while his work promises to offer us the key to our existence it similarly denies us the answers.

What he provides his spectators with instead is a sort of macabre playground, where they are encouraged to explore. In the titles, which designate different states of existence and human activity Ballen persuades us, coaxes us, into believing that the carefully arranged installations he presents us with capture the essence of different experiences and conditions such as "innocence", "metamorphosis" and "contemplation". In a sense he does elucidate these concepts but in another way, he similarly obfuscates meaning.

In Terrorized (2006) for example, which pictures a cat running away from a threatening human form on the wall and a fist on the corner of the photograph, Ballen reaches towards demonstrating the meaning of the word and human proclivity for violence, but its clearly not a fixed meaning - photography can only capture a single moment. Nevertheless his literal and playful demonstrations open up a space in which the gap between the sign and the signifier loosens. Nothing is fixed in this body of work: it is neither wholly fact nor fiction, nor is it completely figurative or abstract, nor is it totally sinister or humorous; this body of work vacillates between all these points. It is not that Ballen wishes to befuddle his audiences - although he is not opposed to this outcome - he is more concerned with pushing the limits of his chosen medium, turning the lens inward so to speak so as to explore, subvert and challenge the documentary canon, which once held him captive and is perceived to hold the truth ransom. This exhibition probably won't receive the attention that some of his more contentious works attracted in the past, but it is far more intellectually and visually thrilling. - published August 9 in The Sunday Independent.
Posted by Mary Corrigall at 7:21 AM