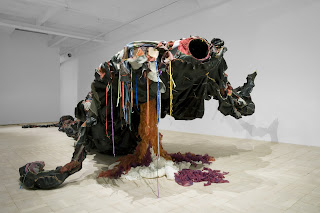 For an encounter with one of Jozi's pre-eminent art talents, there is only one destination worth visiting: August House, Doornfontein.

Belying its austere interior, with its concrete floors and banal white partitioning, this dilapidated edifice is a hub of artistic production where the likes of Lawrence Lemaoana, Usha Seejarim, Dorothy Kreutzfeld, Gordon Froud and Nicholas Hlobo are to be found working.

The first clue to the activity inside is scrawled in the lift. One button is labelled "Other artists" while another is for "the Othered artists".

In his art Hlobo engages with aspects of himself that suggest "otherness". His homosexuality and his allegiance to and reverence for the Xhosa culture and language - which are often cast as "un-African" because of their indebtedness to the English language and Anglo Saxon mores - are superficial identifiers associated with his unique brand of art. He isn't bothered by being typecast as the "gay, Xhosa" artist.

"People choose the things they want to know," the 33-year-old observes. "It doesn't matter whether I try to be out of the box, I will be placed in the box by someone."

Hlobo's art isn't easily pigeon-holed. The most one can say is that it encompasses and celebrates ambiguity. Not only does he integrate vocabularies particular to both Xhosa cultural practices and the Western art tradition, bringing their interrelatedness into focus, but he obscures gender positions.

He also relishes delving into transitional states such as the uneasy divide between boyhood and manhood. His art is confrontational and subversive as he goes about claiming the supposedly undesirable parts of himself.

But these personal dialogues have universal resonance, summoning discourses on nationalism, cultural hybridity and the manner in which masculinity is constructed.

They aren't unfamiliar themes on the art circuit in South Africa. It's the distinct idiom he has developed that has set Hlobo apart.

His characteristic rubber sculptures-cum-garments, stitched together with delicate, feminine ribbons, have been a hit both internationally and locally. Last year he had solo exhibitions at the prestigious Institute of Contemporary Art in Boston, Massachusetts, and at the Tate Gallery in London. This year he won the coveted Standard Bank Young Artist Award. Phrases such as "hot property" aren't misplaced.

Ideas come to him when he is conversing with people. If he was locked away in a room on his own he would find it hard to come up with new concepts, he says. This characteristic makes him a loquacious personality. An expected one-hour interview grows into three, in which all sorts of peripheral details about the artist, such as his penchant for tea, emerge.

His studio buzzes with activity: three of his four assistants are seated in front of what appear to be giant octopus shapes fashioned from panels of black rubber tubing. The work is called Umtshotsho, referring to a traditional celebration for youths before they are inducted into adulthood.

The rubber tentacles stretch across the concrete floor. Brightly coloured hand-stitching on the edges of the rubber softens and beautifies its coarse, hard texture. It's a fusion of masculine and feminine aesthetics with a strong craft sensibility, which Hlobo says he embraces in an effort to rally against the Western tradition of art and embrace his Xhosa roots - like killing two birds with one stone.

"We were told at tech (Wits Technikon) that art has to improve on the old ideas. There has to be some sense of your intervention. I am writing a story about being South African, but I also have to challenge the conventions of art making. Does a sculpture have to be rigid?

"In the 1980s and early 90s, artists moved away from using craft techniques. I wanted to go back to that, to be inventive. We were told that the objects we create should belong to the movements in the world, but that your colours and shapes should be distinct."

"Nothing is ordered and measured, like some of the works you get in England. I looked at how African people make things: they always use ornaments and details. Especially when I look at the Xhosa culture, there is this lack of control: you let things go and you put in all the colours; it is a bit excessive and elaborate. It is not subtle."

The giant octopus sculptures that hang from large hooks in his studio like animal cadavers express this Xhosa aesthetic. They are highly crafted, elaborate works made of a plethora of rubber panels all hand-sewn together with multicoloured stitching. For Hlobo the act of fusing pieces of fabric echoes the procedure one undertakes when piecing together one's identity.

"The process of stitching is the process of subtracting and adding. Trying to find your identity is about cutting things off and bringing things back; sometimes you don't know what you want to keep. The methods and techniques that I use in my art talk about rebuilding."

Hlobo prefers to spend time ruminating on ideas than getting stuck into the nitty-gritty of putting his sculptures together. It's an approach he had from early on, when he signed up to do a B Tech in Fine Arts at Wits Technikon (now the University of Johannesburg) in 1999.

"My idea was that I would work in a production house as an art director. I thought I could just think up ideas and other people would make them."

His training further entrenched the notion that he should focus on the conceptual aspect of art making.

"I learnt that these days you can commission someone who works at a foundry to make things for you. I came to realise the importance of the idea rather than the product itself. That was drilled into our heads. The ideas are important in making a well-resolved piece, rather than just making a piece with nothing behind it."

His training also emphasised the necessity of telling a story through art. "I had a list of ideas that I could talk about and finally settled on my identity as a South African: I looked at masculinity, being black, being gay. It gave me the opportunity to voice the things that I questioned in my culture, such as masculinity.

"As time went by, it grew into my celebrating being a South African and all the baggage I carry."

In this way Hlobo's art became part of a process of self-acceptance.

"I developed this pride in all that I am and all the things that have built me. So my art became a playful way of celebrating myself."

Hlobo's allegiance to Xhosa culture was instilled while growing up in the Transkei. It was a rude awakening when his family relocated in 1988 and settled in Thokoza, where he became the target of ethnic slurs.

"We hardly saw white people or Indians in the Transkei. In 1976 everybody left and moved out the homeland because things were becoming tight.

"We didn't feel like we were living in apartheid South Africa. So when we came to this part of the country, where identity and culture was really distinguished, I got to hear about all the stereotypes around Xhosas; how Xhosas think they are smart, that we have corrupted our language … because it is mingled with English. The perception is that the Xhosas have sold out."

Attacks against his ethnicity, however, only deepened his commitment to his ethnic roots. "At times it was harsh in the township. Everyone one is sceptical and doesn't accept you because you are Xhosa. It has made me to be very aware (of being Xhosa) and has encouraged me to walk tall and be proud.

"The Xhosa language has been looked down on for a long time and it is up to me to show it off and share its sophistication with the sophisticated world."

In the titling of his works he exploits the nuances and ambiguity of the Xhosa language. "I wanted to refrain from the formalities of the language and try to have some understanding about how the words evolved and where its influences come from. "With all of this I am trying to understand my sense of belonging to the South African nation, the queer culture and being Xhosa and my colonial heritage."

Hlobo is particularly interested in the affinities between Xhosa and European traditions. "The Xhosa culture shares so many traditions with the West, they are so tightly knitted together, I find it hard to distinguish the two. I can't understand if a particular facet is pure or if it has some foreign influence. I find that fascinating." - Published in The Sunday Independent June 21, 2009
Posted by Mary Corrigall at 2:25 AM